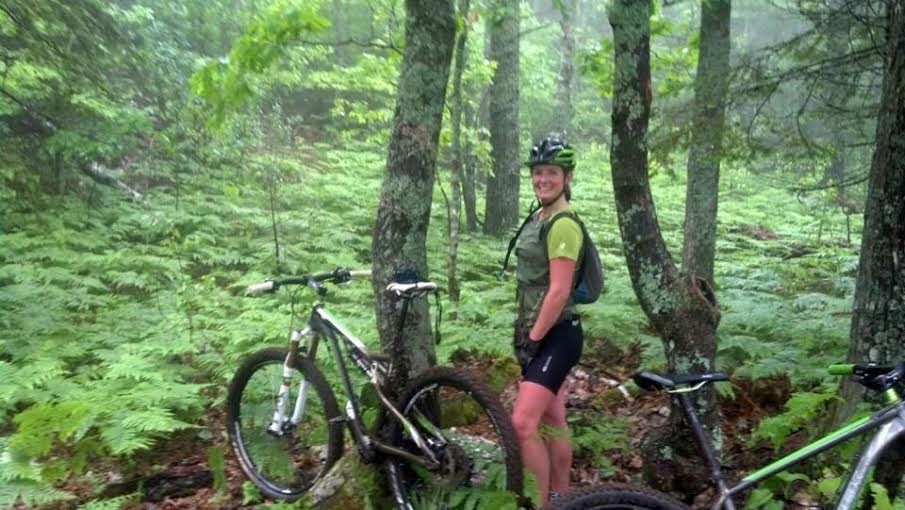 I am 9 months pregnant (any day now!) with our first baby, so most of the questions don't yet apply to me, but I can answer the prego ones:

What were the biggest challenges you faced with biking at different stages of pregnancy? Did you stop biking at all during pregnancy? Why?

In the beginning, my biggest challenges were fatigue, headaches when I would really exert myself, and my gigantic, super sore boobs; hitting any bumps was pretty terrible with those things! I did a team 12-hour mountain bike race when I was 5 weeks pregnant (mostly because we had been registered for months already) and it was a challenge due to the aforementioned reasons.
It was also really fun and I am so glad I participated, but it was certainly a little trickier than riding non-pregnant. I continued to try to ride into the fall, but was plagued by the headaches and fatigue. I finally threw in the towel after taking a weekend trip to Levis Trow with friends. A college buddy, Victoria, and I set out for a mellow mountain bike ride in the fall colors; I ended up making it about 3 miles (at a quite slow pace). I really didn't like the feeling of my uterus shifting side to side. Luckily, she was patient with me (probably even more so because she had just been through the same experience the year before).
Going into pregnancy, I planned to be one of those super women who lift weights and do all kinds of stuff despite being knocked up; it was a definite transition to have to accept being more sedentary than I would like! But, it will all be worth it soon. Bring on the baby trailer!

After reading about Kelly and her active pregnancy, I thought “why not share what it was like month-by-month?”
I'm certain that every pregnancy is different, but we can all learn from each other's experiences. One of my friends from New Zealand (who was living in Europe) recently rode her bike to the hospital to deliver her baby girl! She said it was easier and more comfortable than calling a cab. She is amazing! Anyhow, I can try to break it down into month chunks of how-I-was-feeling:

Month 1: I was still riding regularly for exercise, despite my boobs being huge and quite sore. In fact, my hubby was out of town for work when I found out we were having a baby, so I took my phone with me on a road ride knowing that he would likely call sometime soon; we shared the news while I stood on the side of a country road sweaty in spandex! Riding was becoming more challenging, but nothing that was going to stop me from trying to be in some sort of shape for the mountain bike race that was coming up. (We were living in St. Cloud, MN, which means local mountain biking options were essentially non-existent. Most of my race training was on the road bike, which is not ideal, but at least it kept the legs in shape!)

Month 2: I competed on a 'Four Person Female' 12 hour mountain bike race in Wausau, WI...and we won! There were only two teams in our category, but it felt awesome to get a giant medal anyway. Challenges this month included fatigue, headaches, and massively large, super sore boobs. That or all my sports bras shrunk.

Month 3-4: I tried to continue going on some road and mountain bike rides, but it was really starting to suck. The fatigue and headaches were getting to be too much and my 'fun meter' was basically on zero. I did one last (incredibly mellow) mountain bike ride with a girlfriend, then officially decided I was done, as I hated the feeling of my growing uterus shifting side to side as I pedaled.

Months 5-7: I was a little cranky about my decreasing (let's be honest, non-existent) exercise and the hubby and I were trying to transition from me being a very active member of our relationship to me being more and more of a couch potato.

Months 8-9: I finally accepted my couch potato status, knowing that the end is near, summer is around the corner, and I will be back on the bike (thus in nature/exercising, which equals a happier mind) hopefully soon!

Thanks so much to Kelly for sharing her experience on being a pregnant, bike riding woman! I’m looking forward for some updates over the months (years) to come!
Labels: interview