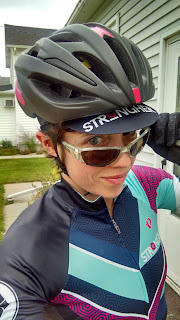 A couple weeks ago Travis had put the finishing touches on a bike that he had been building up for me since around February/March. This bike was to be the two-wheeled machine that I would ride at the Chequamegon Fat Tire Festival (September 17th) and I was super excited to get my feet wet on the race-oriented full suspension that just so happened to have my favorite shade of pink for an accent color.

The timing of this bike being complete has been thoroughly off, by quite a long shot. The effort it took to get the cranks from Race Face made this bike almost not be completed in time, however, the good folks made it work and the bike was finally ready to be ridden.

Once we were able to bleed the rear brake and have everything neat and tidy cable-wise, it was time for me to hit the trails (and gravel) to see my thoughts on the fit and geometry.

Stand over didn't seem to be a huge issue and the overall reach was great as it felt more comfortable than the Lush. I was also interested to try out the 29" wheels vs. the 27.5" that the Lush came with. It had been awhile since I had been on a 29'er so I was super stoked to give this bike a go. However, as much trail "shredding" I wanted to do, I knew that I had to put priority on high mileage instead. The first long solo ride was a loop from Decorah to Bluffton and back racking up almost 40 miles.

My next ride I planned on a whim and decided to do a loop that Barrett had taken me on twice. It would be just over 40 miles on gravel and pavement.

Both rides I would say were a big deal, but the longest ride loop from Decorah to Sattre to Highlandville and back was a bigger one as I had done it twice and not exactly the same both times. I am awful with directions and my internal compass was born bent and backwards. I wanted to do the loop we had done on Tuesday, taking the chances with the impending rain coming and dealing with the warm temps and hot afternoon sun.

In preparation for Chequamegon I wore a small Camelbak filled almost full with water (I will likely be using a larger one in lieu of a seat pack with a tube and tire lever set- because of my need to feel prepared with all of the essentials plus enough water.) I had a water bottle with NUUN hydration mix in it as my secondary fluid source. I had a couple snacks, some SaltStick tablets, and my phone...because if I needed directions I could text Barrett or Travis.

I applied sunscreen and topped off my tires- it was ready to go on my epic solo adventure.

I made my way to Trout Run Trail which is a few yards away from the house and rode that to Freeport to connect to River Road.

I knew from there that I would just follow River Road for a long, long ways. I took a quick stop at the usual pit stop area that Barrett stops at for a quick bathroom break and to check the weather. So far so good! My goal was to make any break I took to be short in time, because I wanted to keep riding as long as possible to get a concept of my time and general speed average.

Eventually I came to a stop sign and thought "Crap." I used logic, it seems the ride goes in a big circle and I would need to go left to circle back, so I did. Scenery became familiar and I was confident I was going the right way. I started taking sips of water from my Camelbak and would alternate here and there with my hydration drink. I was sweating a lot.

Eventually I finished the climb into Sattre; I took a short break to take a couple big swigs of hydration mix laced water and continued down a hill into a valley. From there I started my ride to Highlandville, connecting with pavement again, I made my way into another valley and to the Highlandville store where I topped off my water bottle. I chugged some more water and topped it off again. I wasn't hungry but knew I should eat something, so I took a couple SaltStick tablets- fuel is important but fueling on a hot day is difficult for me!

I turned back around and eventually took a left that had me go over a bridge (look at me, forgetting a road name and just going by landmarks!) This road has a pain in the butt climb right now because of fresh gravel being chunky and loose. Last time we road up the hill a vehicle had come down at the same time. This time I made it up the climb without any traffic and was relieved.

Then I came to a fork in the road and took a left, I think it's Big Bear Road. That too, is a climb. I sat and spun my way after I couldn't use additional effort. Once I made it to the top, I took time at the stop sign before I got onto pavement again to take a GU. I was pleased to have the feeling of "Yes, this is good!" sweep thru me and hoped that I would indeed feel some energy for the last leg.

The downhill from St. John's Lutheran Church to Middle Hesper Road was great and welcome. Smooth pavement and the wind rushing past my ears- fun!!

I made my way back to Decorah, feeling confident with myself and knowing that I would totally make it home without getting lost. The challenge had been accepted and also won! I managed to ride my pace, take short breaks, and not completely bonk.

The ride down Clay Hill was invigorating and I hoped that no one would be behind me or coming up as I stayed more in the middle of the road due to some side erosion.

I will admit that I was thankful to hit the paved trail and head home. The last bit of my ride on the gravels prior to Clay Hill had been riding into some headwind. I was definitely starting to feel a bit tired and all I could think about was a delicious cold beer from Pulpit Rock Brewing Co. I held out hope that they had some Loopy Lynn still on tap.

When I rolled into the yard I was happy. A bit tired, but so happy. Not only was it a ride to test my endurance, but it also tested some of my fears: roads with traffic and getting lost in the countryside. Also very sweaty, man...pretty much drenched from head to toe. A shower would be in order and I text Travis to bribe him into joining me for a celebratory brew. It totally worked and I got some Loopy Lynn to boot!

I would be as ready as I could be for Chequamegon. I felt my average was respectable given the weather- I'm not a hot weather rider so managing a 13.7 average felt darn good. Also with the lack of food, but to my defense, I had my usual Tuesday Family Table breakfast ingested prior to going out. I had calories to burn.

Looking at the ride, I was most thankful for the lack of vehicle traffic. Cars and trucks are the largest reason why I have not explored more of the roads (gravel and paved) for some time. I've been so appreciative of the kind people out there who give you ample room while passing. I give you my sincerest thanks. I'll keep comments to myself on the other folks who are not so courteous. 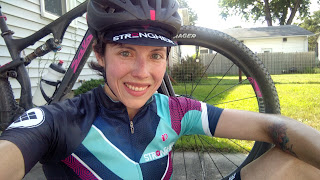 My ability to ride longer miles is impressing me, tho I suppose it doesn't take too much to impress me as I'm easily impressed! Can I improve further yet? I'm not sure! Either way I'm feeling proud that I'm able to accomplish more than I originally thought would ever be possible with my bike riding. The rider I am today compared to myself in September of '12 is completely different. It's good and I can't wait to keep the adventures in my #bikelife rolling!
Labels: bike life gravel growth personal women bike