The Fearless Women of Dirt Conquer the Pines 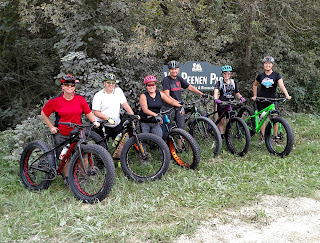 It was coming up on another holiday weekend, Labor Day, and we anticipated our usual Co-Ed ride would have minimal attendance due to that.

With talking to the new bike riding acquaintance I had made thru my bank, I decided to throw out to Social Media land the possibility of an introductory women’s off-road ride.

To be frank, I had little expectation that anything would happen. It always seemed that whenever I tried to plan a women’s only event/ride that something would inhibit it from actually occurring to its fullest potential.

Weather and people out of town were the usual culprits and I held a shred of hope that something would come to fruition.

I made the event on Facebook and shared it all over the place- in the FWD group, on the FWD page, and my personal page. I hoped that some of the women with whom I had talked to over the last several months that had shown interest would see. Unexpectedly and much to my surprise, two women who had been following the FWD group let me know of their availability and interest! Alright! This was going to happen! 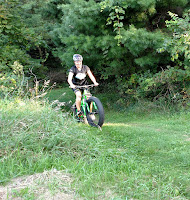 We decided that the Co-Ed ride would be off the table for the weekend, officially, so Travis could load and haul all the bikes and bodies to the Van Peenen park entrance.  From there he would do some trail work and be ready for us when we were finished. I approximated being out sometime around 5:30 p.m. to 7:30ish p.m.

On Saturday, two more women committed to joining the Sunday ride- awesome! Count on Saturday for individuals on Sunday was 5. This was the most number of women I’ve ridden with solo let alone the most number of women who had shown up for an introductory ride! I was super pumped. We set aside bikes for the riders on Saturday before we left work so we would be ready to roll on Sunday. I was feeling excited but nervous- I worried about overwhelming everyone with too much knowledge and wasn’t sure if I could keep my talking to a minimum. 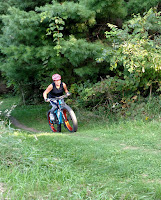 Sunday rolled in and the day went by quickly- soon it was time for the women to start arriving! As they rolled in, we pulled out the bikes we sized to them to have them see how they liked them. Seat heights set, air pressure checked, bikes loaded and we were ready to go!

I started the ride out simple- we would make our way up the Fire Road and take a short break at the top for everyone to catch up and catch their breath. Unfortunately mosquitoes were still an issue, so this made necessary breaks a bit challenging. Either way, bug spray was along in case of re-application. Before we rolled into Pines West I discussed on the importance of using both the front and back brake. 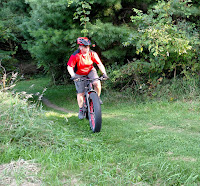 Many times individuals use only the back brake because of tales told about how someone went over the bars (or maybe they did)- and that eliminates your stopping power and control. I described how when I’m mountain biking (or any other style of riding) I flutter them both back and forth, so I have a very controlled slow down and/or stop. That way I’m for sure going to stop if I need to and I’m not wearing out my back tire from skidding.

After we made our way thru Pines West, we came to a stop in front of a tiny knoll. This little hill was going to be the perfect opportunity to go over a couple basic handling skills that some may already do when riding the paved trail or other surfaces.
Standing while descending and standing while climbing up an incline; two tricks that help make riding off-road more confidence inspiring. You find that climbing up hills while sitting and spinning can work, but at the same time there is a lot of effort that goes into sitting and spinning. If you shift to a gear or two harder and stand up, you move forward much more quickly and the effort seems less. Standing while descending helps you keep your center of gravity where it will not feel like you will topple forward over the bars when going down a hill. Some hills you need to be far back over your seat and others not so much, but it’s something that many folks are afraid to do. 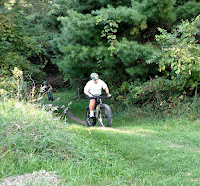 We also discussed the importance of level pedals, especially when it comes to riding in
rooty/rocky/rutty sections.  We did a couple laps on the little knoll and then continued into Pines East- it felt like a few more women were feeling a bit more comfortable with the root-riddled terrain, which was excellent! The pines are a great place to go for introductory rides, but the roots do provide a challenge. Fatbikes were definitely the way to go for an extra dose of confidence.

At the end of Pines East, I asked for a volunteer- someone else in the group to lead so I could tail behind. Our fearless leader took off and we followed, back to the knoll where I had everyone do another round of getting off the saddle with climbing/descending.

Our fearless leader took the lead thru Pines East and then I took back over and led us thru a winding route thru some of the Prairie paths. We wound around the Prairie and eventually went down First Right and back to Pines West. I took the rear again until coming out of Pines East, and then we hit the Prairie to the Fire Road so we could all blast down (to everyone’s personal comfort level) a fun hill to end the ride. 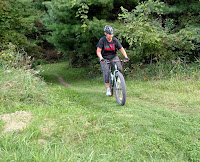 Everyone had smiles and even if comfort levels had been challenged, they had a great time! Trying to make the introduction to off-road riding not be filled with intimidation and worry is hard, but I did what I could do to try and make it a worthwhile experience. Regardless of the experience, whether it met expectations or no, everyone could say they did a great job at giving it a solid go!

I was pleased to hear feedback that there were some good lessons and tips given- that made my day. It’s not easy to keep skills that are helpful to know to a minimum when starting out, but going with something simple that everyone can work on in all applications is helpful. Level pedals can be worked on during any style of riding; you just have to think about it. Braking properly is also something that can be practiced anywhere at any time on the bike. 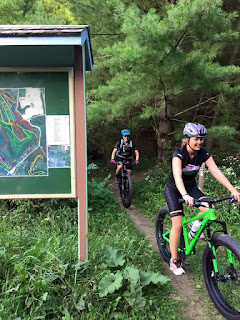 I can’t completely express my happiness over the ride and how proud I was of everyone and their
efforts. It was humbling and wonderful to have a group out and introduce them to the type of riding I’m passionate about. It was great to see confidence increase with the laps along with the smiles that were had as everyone realized that it wasn’t as impossible as they may or may not have thought it would be. Being out in the woods on that Sunday with the group of women who showed up was an experience I will hold close to my heart for some time to come, and I hope we can make another ride like that happen again soon!
Labels: bike life FWD growth introduction mountain biking women bike