Kelly was interviewed two times in '14, you can read her past Women on Bikes and Moms on Bikes interviews by clicking the links!
Kelly is such an inspirational woman, so I thought it would be fun to go back and catch up a little bit on what has been going with her "Life on Two Wheels."

Quick Catch Up- Tell us about yourself and the riding styles you enjoy:
Hello! My name is Kelly, I am 33 years old, and I live in Duluth, MN.

I have a fantastic husband, Karl, who is also passionate about bikes and a little guy named Wyatt (with whom I'm staying home while on a break from my RN career). Wyatt has been showing some serious aptitude in the bike mechanic department (he even added glow sticks to the frame on my Trek Fuel EX), so it won't come as much of a surprise if he joins the family pastime.

As for preferred riding styles, I EASILY am most enamored with mountain biking on single track. There is a place for road riding in my life (when the trails are closed), or on gravel (when there are no trails or good roads), but given a choice I will pick trail riding every time. Last winter, I had the opportunity to dabble in fat biking in the snow and look forward to more of that as well. It is awesome to have so many options!

You have been catching up on riding since you became a parent- do you have suggestions for new parents who suddenly find themselves with limited riding time?
Yes. Take the opportunities when they arise. Even if it means dragging your tired butt out for a half hour of a slow pedal, it is usually worth it. (Usually! Sometimes laying in the yard and staring at a tree is just what the doctor ordered.) Also, be kind and realistic with yourself. You might not have as much time to ride, thus may not feel as fit or skilled as you previously did, but you are out there doing it as best you can during this challenging time. That in itself is enormous. In order to be a good parent, you need to take care of yourself. The balancing act can be extremely tricky, but as long as it evens out over the days and weeks, you are doing something right.

It was quite a game changer for us to go from being able to ride basically whenever and for however long we wanted to "I have this specific window during which my child has someone else to care for them and likely will not need me for food/nap/etc". There are many evenings when Karl and I don't get to hang out much because we take turns riding, but we know that we need exercise and nature to be happy, so we make it work. It is fantastic to have family and friends who are willing to watch Wyatt so Karl and I can occasionally ride together as well. 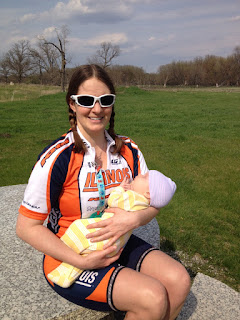 Were you able to get back into "riding shape" quickly or did it take awhile?
It was ROUGH in the beginning! I had a c-section, thus had to wait at least six weeks before even trying to pedal. I was also lucky enough to have sciatica, pubic symphysis separation, and plantar fasciitis. (What the H, pregnancy?! So much for "being super active the whole time.") As you can imagine, I wasn't in peak physical condition by the time I was able to ride again. We were living in St. Cloud, MN at the time (which is more a road biking than mountain biking place), so when that six weeks was up, I got dressed (in my husband's riding clothes, as mine didn't fit), loaded up the baby and the bike, and set out to find a remote place to give it a shot. In a nutshell, I made it about 7 miles at roughly 11.5 mph, had to have Karl literally hold my seat and run next to me as I tried to get out of the parking lot (which was gravel and uphill and not a good place to be walking in carbon soled shoes).
Not to mention that I seemed to have suddenly developed asthma while trying to make it up a tiny hill. It got better fairly quickly-ish, but struggling through those first rides was tough. It took over a MONTH to not have a sore tush in the saddle. What happened to a week?! Flash forward to last summer, when I could not only wear my own clothes again, but also race. Thank goodness!

What suggestions do you have for women who are getting back on the bike after childbirth?
Keep after it, even if it seems discouraging (both time-constraint-wise and fitness-wise) and be kind to yourself. Having a baby changes your body and it takes a while to figure it all out again. Also, some women recover quickly, but some take months to heal. Listen to your body and take it at the appropriate pace. You will meet your goals over time!

How was it the first few times back on the trails? Did it ever seem like you had left them or did it take some time to get back into the swing of things?
The first few times were okay. It was a bit shocking how much balance had to be relearned after waddling around with a big 'ol belly for so long. I stayed on trails that were well within my comfort range while I worked out the kinks that first summer.

You participated in some events this year- tell us about the events and what you enjoyed about them:
This year was great for events! I was able to make it to three Wednesday Night Enduro Series races in Duluth, which are basically the beer-league of racing for COGGS (our local IMBA chapter) members. Additionally, The Great Hawk Chase and Voyageurs Revenge (both 15ish mile...if you race the sport category...XC races in Duluth) and a short enduro in Copper Harbor over Labor Day weekend made it into the books.

The best part of all the races is the comradery, a feeling of accomplishment after the harder ones (read: I thought I might die of heat stroke at The Great Hawk Chase, but did not!), and the occasional podium achievement. In the female categories, there are often low numbers of racers, which makes top three (especially when there are age group awards) much more obtainable, but it still feels great! Hopefully, as more women join the sport and decide to race, there will be loads more competition! In Copper Harbor, there were plenty of fast ladies, which is awesome. I didn't do so hot on the speed-front, but I also rode Red Trail during the race for the first time ever and didn't get hurt, so I'm calling that a win! 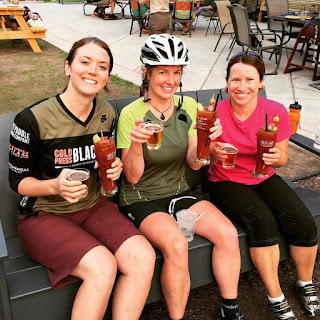 Do you legitimately train for events? If so, what does that entail?
I'm going to have to give that a solid 'no'. I simply don't have the free time. I am very lucky to get opportunities to ride when Karl's in town (he travels a bunch for work) and when family and friends are willing to hang out with my little guy. Some of those rides are hard and fast and others are super casual (those are the times I'm so tired I can barely muster the energy to get out the door). At some point last summer, I was debating whether or not to enter a race because I didn't feel like I was in 'race shape'. I eventually came to the conclusion that if I waited until I was in race shape to do races, I would maybe never race again! So I entered knowing my fitness was at least decent enough to finish moderately well. That approach turned out to be a great decision.

For you, what inspired you to participate in events in the first place?
I was interested in racing for years, but never felt like I was good enough. Then one winter in Wisconsin, some lady friends and I put together a team for the Wausau 24 (we did the 12 hour event) and it was awesome. It took a team (which seemed more comfortable than racing solo...and looking back over all the races I've done, team racing my favorite) to get started.

Why should women consider participating or volunteering at events/races?
Because you feel good! Being involved in the broader community of biking via races provides a sense of community and either accomplishment or purposefulness. Also, it is time to balance the gender scales and get more women on the start lines. The more females in the cycling world, the stronger our influence in all areas of our sport (of which the positive effects will be huge).

How do you incorporate your child into your current biking lifestyle?
My first thought was "I basically don't"! He attends races sometimes, but biking is currently an escape from parenting for me. It is a chance to fill my bucket, so to speak, and spend time clearing my head in nature. I can be a much more patient and happy parent when my needs are met. Breaks from constant care giving is integral to that. Although, we will get Wyatt a kick bike next summer, and family bike outings will become a thing (I hope). Karl and I both really look forward to introducing him to mountain biking (and our niece, if she's into it when she gets older). That's not to say that solo rides won't still be important!

Baby #2! What have you learned with riding during the first pregnancy? Will you be doing anything different the second round?
I learned to listen to my body and build fitness at a reasonable rate rather than pushing too hard out of the gate. The second round will likely be the same, besides having TWO little ones with whom to manage my time. It is super encouraging to know that I was able to rebound after the first pregnancy. I hope this time goes as well! 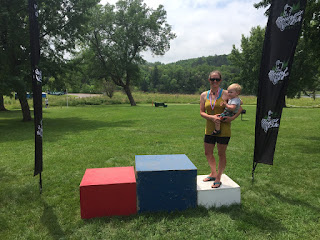 Any new bikes since your last interview or future new bikes in the works?
Yes! I am still riding my Trek Fuel EX, which I LOVE, in addition to my Trek Domane on those days I venture onto a road. I had a Trek Farley, which was awesome, and will rejoin the stable next year before winter (I won't be fat biking my baby belly around this snow season). Depending on how much I decide to race XC in the future, I may or may not switch my mountain biking set-up to a Trek Fuel EX 650b (rather than the 29er I have now) and add a race hard tail (a Trek Procaliber). We shall see!

Anything else you would like to share regarding bikes or kiddos?
If I had coffee this morning, there would be a bounty of wisdom in this space. The orange juice isn't cutting it.
Labels: growth interview mountain biking women bike