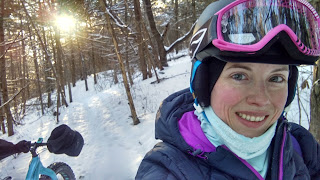 Let me just say, that out of the past winters, this one has been one of the most frustrating ones to date. I've found myself on a few more trainer rides than I have anticipated due to the fluxing temperatures/snow conditions. Not that it's all bad, you can catch up on your favorite shows, but it leaves a lot to be desired (nature.)

The snow we received in copious amounts was nothing more than powder.
I am not involved with a winter sport that does well with literal powder snow, so it left many of us here in Decorah feeling a bit frustrated. (At first.)

The first few rides in this snow, even with our technical single track groomed, was difficult and I left the trails feeling a bit sour vs. accomplished. I'm all for challenging myself, but this was above and beyond the typical "challenge."

A Tuesday about two weeks ago had me on a roller coaster ride of emotions. The trails were starting to get darn good and packed in, which made riding them much more possible for someone who hasn't had years of experience handling a bike off road, let alone in the snow. I hit up some of my favorite choices in the Van Peenen area and felt pretty alright. I climbed some of the climbs and didn't wipe out around any corners. All-in-all, I felt pretty good with everything even tho it was far from a cakewalk.

Then I decided to go over to Dunnings- which provides more challenge yet. At that point, I had to ride up...scratch that. I walked the heck out of Old Randy's. Riding was spotty, all things considered, but I managed to get to the top. Once I was at the top I figured I'd give Upper Randy's a go- which had been groomed, but it hadn't had much traffic since. This trail ended up having me hiking my bike the entire way. I had gotten in so far that I felt it was stupid to turn around and go back- this is what you call bullheaded.

Eventually I got back onto ridable snow and hit up Captain's. My curiosity got the better of me and I attempted Upper Mother's Day- which scared the crap out of me in spots. It's not that it wasn't rideable- but there are some spots that up the ante for making me nervous. My trek up Wold's was a trudge fest. Once I got back onto the Ice Cave loop, I figured all was fine, until I ended up going over my bars.

The words that were escaping my mouth would've made my grandma flip. Needless to say, I was glad that I was riding solo.

It made me wonder how the heck my skills simply vanished- tho that really isn't the case. It is a harsh reminder that for many, there are a lot of factors that come into play when you fatbike. Snow conditions and tire pressure can both make your experience better or worse. When it comes to poor snow, really the only thing you can do is suck it up and make the most of it.

Let's fast forward to last Tuesday. Confidence reinstated after a few good rides and I was feeling completely and utterly ready to take on the trails. Nothing says "Awesome" like zero degree weather and sunshine!

I felt so capable. My attitude was so much better because I felt more confident with the trail conditions and my handling. Okay, so this essentially proves that I can ride in the snow and my skills didn't just disappear into thin air.

I event went over to the Dunnings trails (again) to check out and give Travis feedback on the job he did crafting Lower Randy into a rideable section. It was marvelous. Probably the best snow ride I've ever had on that trail. I even did a loop to re-visit Mother's Day and rode that trail without putting a foot down! I won't say that I wasn't a little nervous at a couple spots, but I did my best to just roll thru without a second thought.

That day I had one of "those rides"...you know. The ride you have that pretty much makes your whole week feel awesome. The one that gives you the confidence boost you needed, and the ride that makes you feel like you can conquer just about anything. 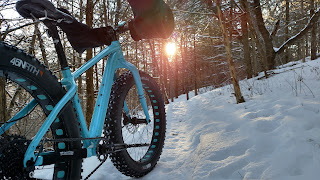 Fatbiking in the snow is about the most fickle riding you can encounter, but it is so worth the time and energy spent doing it. You work different muscles, build handling skills, and become a stronger rider both physically and mentally. You really can't go wrong with that!
Labels: fatbiking personal