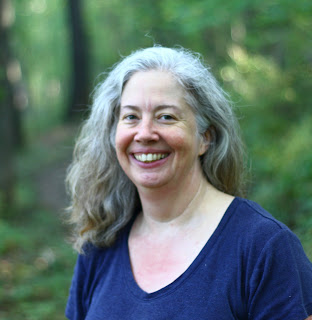 Ann is also a board member of Urban Trail Co., the Kansas City non-profit organization that manages resources and agreements to build and maintain area trails.

A professional technical writer, Ann changed her sedentary life and became an adult-onset athlete in her mid-40s, taking on multisport, then trail running, which led to her great loves, trail building and mountain biking.


When did you first start riding a bike?
I learned to ride a bike when I was 35. It was heavy and didn't fit me well, and it didn't really take. I was 41 when I decided to do a sprint triathlon. I couldn't run a mile, couldn't swim 50 yards, and couldn't hold my line on a bike path. Finishing that race was a proud moment! I did 9 races each of the next two years, mostly duathlon, and added trail running, then mountain biking.

What motivated you to ride as much as you have over the years?
It feels good.

My body feels good when I ride. Not numb - alive. Worry and worn-down feelings dissolve.

I get bruises from riding a mountain bike. I fall down on rocks or smack trees. Climbs are hard work and make me ache and gasp. But no bruise hurts the way worry hurts. No scrape is painful the way a fearful life is painful.

No hill is as exhausting as giving up once was.

What influenced you to bring physical activity into your life?
I had never been active, and struggled with an eating disorder and severe body image issues, as well as the physical challenges of a sedentary body. Living this way was miserable. But misery generally conflicts with my outlook, so I was going to have to change one way or the other! I would not have seen a way out without the example of friends who told me about how they had cleaned up their nutrition, how they enjoyed trail running, cycling, and mountain biking - and who encouraged my baby steps.

It feels great to see people happy to be where they are, doing what they're doing, in each others company. That's why I like MTB races and the Dirty Kanza - the participants aren't isolated so much, but pay attention to each other and hang out.

I haven't competed in a while, but when I did, I loved the feeling of excitement at a start line, the physicality of sustained effort, the energy among the participants, and the feeling of being spent at the finish. And it's fun to find someone to race, even if it's only for a little ways - a little kid's reflex. Race you!

Do you remember how you felt on your first mountain bike ride?
My first two mountain bike rides were races. It was a good way to try it out, with friends in the woods and with plenty of first aid patrollers! I had only been riding any bike for a year at that point, and I was 42 years old. It was a deep dive into new sensations - scary, but exhilarating. On my first ride, I walked a lot and crashed 3 times, but didn't feel defeated. It was so cool to be doing this unexpected thing, in nature, with a bunch of highly energetic folks.

If you had nervousness at all, what did you do or think to overcome it?
After those races, I kept riding alone - walking tons, crashing on every ride, having almost zero athletic ability or natural gifts for mountain biking. I wasn't nervous. I was terrified.

Sometimes I would sit in my car at the trailhead working up the courage to get on my bike. But the good moments were so physically amazing, so powerful, that it was worth pedaling through the fear feelings. My theory was that if I kept coming back to the trail, my brain would eventually stop freaking out at what I was asking it to be part of. So far, so good.

Tips for brand new beginners: if you're scared on your bike, or the trail freaks you out - stop, look around at the woods, shake out your arms and hands, and find a reason to crack a big grin. It's a lot harder to tense up if you smile. When you pedal, look as far down the trail as you can. This will make the rocks and trees seem like they're not coming at you quite as fast.

Do you use clipless pedals? If yes, what are some tips/suggestions for beginners that you would share? If no, are you thinking of trying it out at all?
Yes, I use SPDs. I change to flats for winter riding, when I participate in clinics, and when recovering from injury.

I'd suggest to beginners, first of all, that there's no right and wrong. Try both flats and clipless pedals, find out what you like about both, and go have fun on your bike in the woods. If purchasing flats, get some that have pins so your shoes will grip to them. Don't buy super expensive shoes right off. Don't use your fancy soft Vibram trail runner soles with flats; the pins can chew through. For beginner clipless - practice on grass a few times, and if the clipped in feeling scares you, breathe - after all, you're just goofing around on your bike; it'll be OK. And you may be putting a foot down and walking occasionally, so consider a cleat type or a cleat-and-shoe combination that won't make your foot slide on a rock.

Have you had any biffs that were challenging for you on a physical/mental/emotional level? What did you do to heal and overcome?
I've had three significant bone injuries (all random flukes, none from a big crash!) and more than a few deep bruises. But no injury gets in my head the way my own hesitation does. In either case, my protocol's the same. Try to use the slowdown as an opportunity to learn something new, then start pedaling again.

When you started out riding, what were some handling skills that challenged you? Do you have any suggestions for what helped you grasp them?
Everything challenged me. I had to build almost every physical skill for mountain biking from the ground up. I'm not that far along now. But more than any handling skill, the biggest challenge is always confidence. Seems the only way to gain it is to do, with enthusiasm, the very things that you don't feel confident doing.

Also, again - keeping my chin up and looking down the trail helps everything.

Are there still handling or technical riding aspects that you find tricky? How do you not let that drag you down when riding?
Oh, sure! I have mastered nothing at this point. Jumbly rock gardens and downhill switchbacks - particularly tricky. No shortage of playgrounds around here for those! Challenge is fun. Learning is fun.

There's a temptation to get sucked into blaming and shaming: "I ought to be able to ride that," or "Why didn't I try that," and feel like I've let myself down and am having a worse ride than I somehow deserve. Ha. The bike is heavy enough without carrying a whole other imaginary rider.

Fortunately, it's easier to adjust my attitude than my technical skills, and remember - I am on my bike in the woods! No matter what, how awesome is that!

Tell us about your bike(s), what they are like and why did you choose them?
I have four bikes, which is an immense luxury. (I'd encourage your readers to consider giving to programs that help girls who don't have bikes, such as World Bicycle Relief or a local nonprofit - here are Kansas City's.)

Bike #1 - Orbea hardtail 26er. I had only ridden trails a half dozen times when I won the fork in our local trails fundraiser raffle. I started researching components and looking for deals, and built the bike with hands-on help from a couple of friends. I found the frame on eBay.

Bike #2 - Specialized AWOL. Newest addition, which I am adopting away from a friend. I wanted a do-it-all bike with a steel frame, especially for gravel, bikepacking, and winter rides that go from paved paths to singletrack.

Bike #3 - Trek FX hybrid. I did my first, get-off-the-couch triathlon on this bike! Commutes to work, runs to the grocery store, paved paths.

Bike #4 - Trek Madone. Bought for triathlon/duathlon, but since I now prefer not to ride in car traffic, it's on the trainer.

What clothing/bike accessories do you love? What would you recommend to your friends?
Oh, gosh. I'm the last person. I wear my holey old lycra underneath $6 clearance Kmart capris. I wear regular tights or leggings instead of the cycling-specific ones. I cut the toes out of long socks and use them for arm warmers.

I absolutely love Champion model 6242 underwire sports bras, which they don't make anymore, so I love my mending kit too. I love my bike bell when I'm on the paved path - people don't always respond to "on your left," but they seem to appreciate the bell warning. I love my smartphone and its charger, which help me feel more secure when riding alone in the woods. 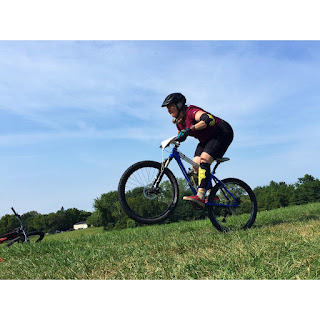 I'd recommend to my friends that they go to a hardware store and check out safety glasses and mechanic's gloves before they spend two to five times as much on the cycling-specific ones. Then, take they money they saved and go to their LBS and buy a replacement chain or a new tool for their home shop or something else that is truly bike-specific.

What do you love about riding your bike?
The independence. I like the air on my face, and the way I can feel myself breathing. Bicycles are such simple, beautiful pieces of equipment. I wish everyone who could, would ride one. And heck with how they looked or whether they were fast or strong or any such concerns. Independence.
Labels: interview involved Kansas City Women's Dirt Summit mountain biking