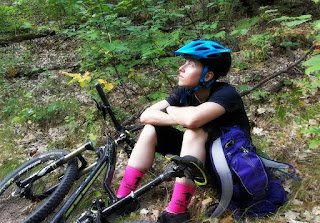 I opened up my laptop and like many individuals out in the world went to Facebook and saw this article pop up in my feed. Written by a woman, she talks about how she loves Maxxis tires and recommended them to another female friend. Not long after, discovered that said Maxxis had a "Maxxis Babes" calendar, which really disappointed her- typical of a company in a market that is built of many men, but few women. The company said that money from purchased calendars would go to charity- but really, does this make everything 'better'???


You can read comments on several posts and some of what I read were along the lines of these:
What's the big deal? Men look at attractive women, Women look at attractive men.
Women enjoy the attention, why else would they pose for a calendar?
Women wouldn't complain if it was a man glistening with sweat, laid out on a towel on the beach.

I understand that women who are in calendars such as the one discussed are very happy to be in them. I won't knock them for doing their job as they are probably paid models. That said, I still understand where the frustration comes from.

However-
I'm tired of the pointed comments directed at the women saying we "all" enjoy the attention, we "all" need hot guy calendars, and we're "all" jealous because "we" must not be as attractive/beautiful as the women shown. "All" our complaints must be emotionally driven because we're feeling bad for ourselves.

A comment by a Maxxis girl said most companies have promotional girls. Why? Is the future of motorsports or any other sport that has "promotional girls" on a line so thin that they will cease to have a following or exist because there isn't a scantily clad female involved? If so, I'll be blunt and say- "That's pathetic."

People wrote comments stating the author needs to "explode, in the good way..." or that she (and others like her) "have a single track mind and can't handle the fact that other people have different opinions." Thus women are "punished" for not being on board with calendars or advertisements ladled in sex appeal, specifically marketed to the male market. We're basically told to put a sock in it and that we're just mad because we don't have enough "hot men" images reciprocated to us as if chiseled 6 pack abs make everything better. We're told to put up and shut up because that's "just the way it is."

I'm tired of continually being scolded for not accepting that sex sells everything.

The women in the ads are objectified by those who see the product and think if they were to acquire the product, somehow, they will be just as beautiful and desirable as the woman in the ad.
The woman seeks out the product because she thinks that is what men, obviously want.
The man purchases the product he sees on a female model for his girlfriend/partner/wife because he likes how it made the model look.

This advertising also affects men as well because I have seen ads out there that basically tell the male that if he has this or that he'll get "all the girls" because he is now irresistible.

I call Bullshit-
Same thing goes for bike related advertising- I want to see real riders doing what they do best.
I also seek out women-focused companies, but that doesn't mean that they can fulfill all of my product/accessory needs. Thus, I respect companies who do not go to extremes with their advertising or feel they need to showcase "promotional women" as the companies appear to try and cater to both genders equally.

It's great to have products/items marketed to the rider vs. gender. I have no issue seeing a calendar or ad that had images of attractive individuals (fully clothed) shredding their favorite trails which would inspire me to get on my bike and ride.

Ultimately-
I realize I'm likely a minority when I say I really don't need/want sex to sell me my products nor do I need it filling up my senses on a 24/7 basis.

I wish more men (and companies) would realize and respect that more women are getting involved with cycling. It's not just grown women getting involved with the sport- young women in high school (or earlier) are becoming involved with mountain bike programs. Many kids have exposure to social media and are seeing all of this, too. Young women shouldn't be trained to think that it's okay for their gender to be sexualized so long as men do the same in return and men shouldn't be saying "You'd be fine if....(you had a calendar too, etc.)"

I am a woman and I can appreciate attractive individuals, man or woman- this does not mean I need to see them half naked at any given point in time. My quality of life does not depend on this.

I look at it this way, if the lack of "promotional babes" for products decreases the sales of said items to the point that the company were to fall thru, how great was the company anyway? Would the lack of promotional women really make certain sports cease to exist? I feel companies that use athletes to promote their products in an inspiring way are much more intriguing to me than not.

How about this for equal? Stop using sex to sell products to either gender.
Labels: inspire personal women bike