I'm a wife, bicycling advocate, mother of three cats and bicycle commuter. I commute about 20 miles roundtrip between home and the office, often times wearing skirts and heels to avoid having to change clothing. It's one of the reasons why I don't like going to the gym! I love bicycling in all its forms but on my blog I mainly write about bicycling as a lifestyle and stylish accessories for the bicycle commuter to encourage more women to use bicycling as a way to get around for commuting, errands, social activities, dining or shopping.

When did you first start riding a bike?
I started riding when I was about 7 or 8 years old. My sister tried to teach me how to ride and during our first lesson, I ran squarely into a tree…in front of a bunch of boys! So I'd have to say that I actually learned to ride a bike as an adult, in my late 20s after marrying my husband. He's the reason I got into bicycling and is my biggest supporter!

What motivated you to ride as much as you have over the years?
I don't like going to the gym so riding a bike is my way of building physical activity into my commute. And the cost and responsibility of having a second vehicle (again) keeps me riding. We have been a single car household for over three years.

What kinds of riding do you enjoy?
Commuting and social rides. And riding with my husband to all of the local restaurants and breweries popping up in Reno.

You've competed in road bike racing- tell us about your experience and what you learned-
It was a lot of fun and I met so many nice women that I became friends with. But it can be stressful. I learned that I didn't need the increased risk of hurting myself when I tend to do that on my own. I also learned that I can crash and still race the next day.

Tell us about your experience completing your first century ride! What did you do to prepare yourself?
My first century ride was for charity and, fortunately for me, it was pretty flat. Leading up to that, I rode with my husband who was much faster and stronger so that helped me build endurance and strength. When I finished it was incredible and I wanted to keep going as if five hours wasn't enough (probably because of the adrenaline). We actually had a 55-mile ride with a lot of climbing the next day and when THAT was done; I was finally ready to go home!

You commute by bike-what inspired you to reduce car usage?
In my profession I work in front of a computer ALL DAY LONG and I decided that if I was going to get any physical activity in, that it was NOT going to be on the dreadmill (like when I used to run as a sport). My daily exercise was going to have to be on a bike because cycling is fun AND I can get from place to place at the same time!
I also realized that having a second vehicle was such a waste just to transport myself to and from work only for it to sit all day in the parking lot (that I paid $400 a year for a permit) not to mention all the other costs associated with using a vehicle. So we got rid of it! Initially my husband was hesitant but I assured him that if it didn't work out, we could always buy another car--and we haven't needed a second car since.
I also do not like to drive or be in a car for that matter. So if we go anywhere in our car, my husband drives even though I feel out of control as a passenger and I tend to get a little car sick. So what it all boils down to is riding my bike is fun, it makes me happy, keeps me in shape, allows me to indulge on sinful foods on occasions without having any guilt and the extra $400 to $600 per month on average that we would have spent for having a second vehicle goes towards more fun stuff!! Those benefits outweigh the benefits of driving a car so it was an easy choice!

What are some of the commuting challenges you face in your area?
I am fortunate that I have several routes I can take that is a good balance of low-risk and time to get there. After we moved homes, I took the most direct route which was 7.5 miles one-way. The route had a bike lane the entire way but it was a fast street (with a 45 m.p.h. posted speed limit). Eventually I decided that I shouldn't be too trusting of people driving past me and found an alternate route. It's just over 9.5 miles one-way but goes through residential streets, along slow streets with and without bike lanes, and a bike/ped path. MUCH more pleasant. Less noise, exhaust fumes and more time on my bike is a good thing!

What do you do when the weather isn't ideal?
I ride all year 'round so if it's not actively raining or snowing, you'll find me on the road. Otherwise, I'll catch a ride with my colleagues or my husband. We have a roof rack on our car (it’s totally worth it) so on days when the weather turns for the worst, I have a backup plan for any direction of my commute. I can take my bike with me to work and then ride home. Or take my bike home with me so I can ride to work in the morning. What I really need, is to build my bicycle collection so I'll always have several bikes at both locations!! Though that could be tough because I have a favorite bicycle I prefer to ride more than the others.

What do you love about commuting by bike? Why should people consider it as a viable means of transportation?
I know it's cliché to say but it is fun. It makes me happy. It saves on the cost of owning a second vehicle. I think I calculated close to $12K a year not including the unexpected expenses like parking tickets or door ding repairs. Not having a second car has more than paid for my commuter bicycle and gear to commute with. And instead of going to the gym my workout is done in the morning and the afternoon on the bike. Goodbye gym memberships and hello to lunch time with friends! The American Heart Association recommends 30 minutes of activity a day so that's 150 minutes a week but I get 1 1/2 hours a day or over 8 hours a week just commuting to/from work. And that's not counting the rides I do during the day to run errands, go to appointments or on the weekends to meet friends for drinks or lunch!! ALL without stepping foot in the gym. Look Ma--I have real calves!!

Have you had a bike accident? If so, how did you recover on a physical/mental/emotional level?
Knock on wood--I have never had a bike accident in all of the years I have been commuting. The only times I have crashed was when I was racing or trying to catch my husband on a road bike ride!! I knew the mistakes that I had made. I learned from them. My bike was okay or repairable – whew!! And I got right back in the saddle just like any other setbacks I’ve had in life. My cool scars are great conversation starters J 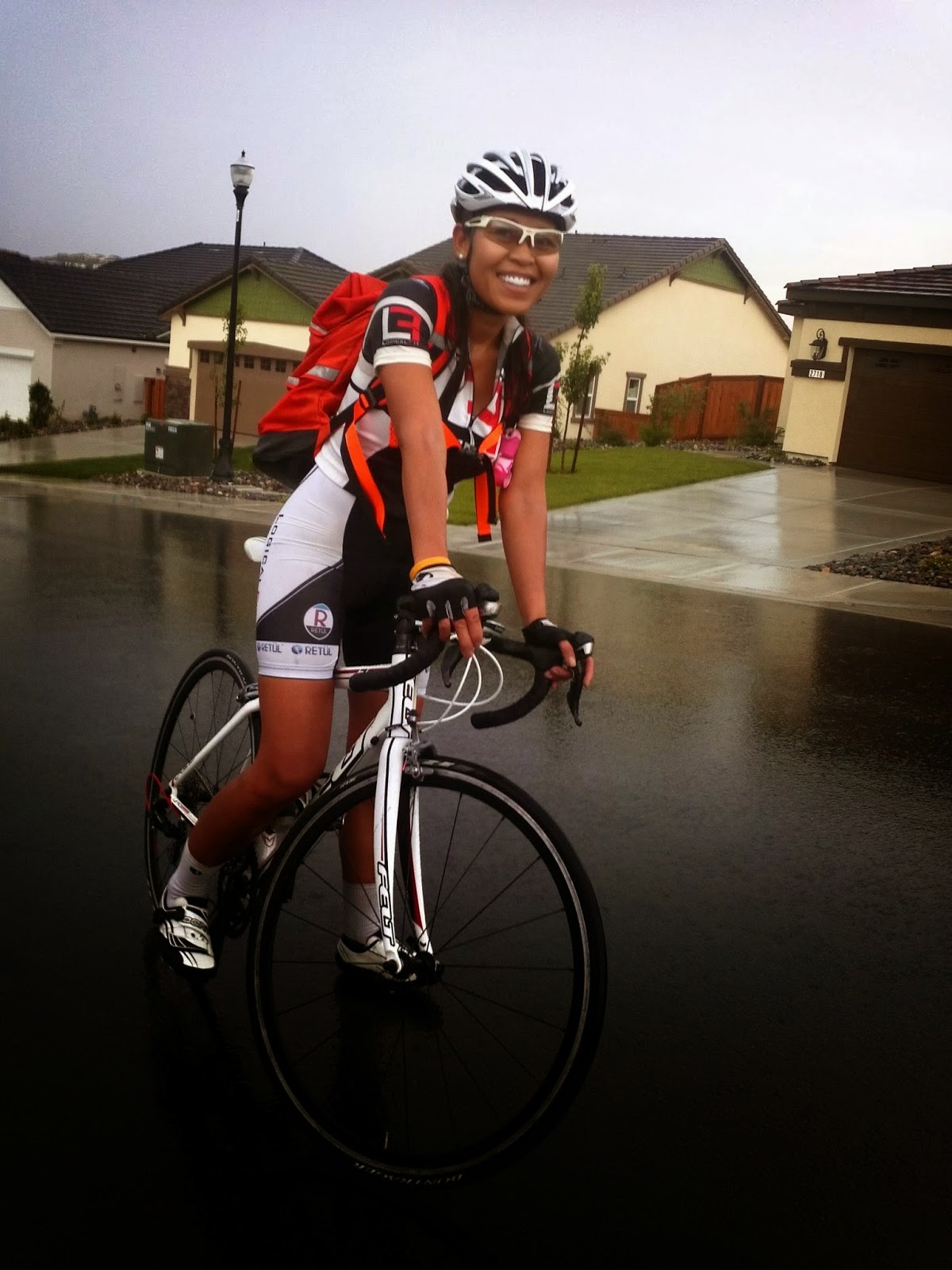 Tell us about your bike(s), what they are like and why did you choose them?
My daily commuter is a 20-speed aluminum mixte. I chose it because it came with front and rear fenders, a rear rack to carry panniers, and enough gears for the climbs on my way to work and home yet still has that classic look from European bike builders of the 40s and 50s.
I have a road bike that is white and we had many, many rides together. I still love it but don't ride it as much because I use my daily commuter to get around even on the weekends. It's a carbon road bike and not really built for commuting.
I have a project bike that I picked up from a garage sale for $25!! It's an Austrian built Sears 5-speed from the late 60s but it's stuck in one gear at the moment. I need to replace the cable before I ride it downhill from our house because it would not be fun to ride back up an average 9% grade road for a mile.
I have a Papillionaire diamond frame that I ride to breakfast with my husband on the weekends.

What do you love about riding your bike?
That I can see everything around me. The changing seasons. Neighbors and people along the way that I exchange greetings with. Life happens SO FAST and riding my bike slows down life for that moment so I can savor it.
Labels: interview