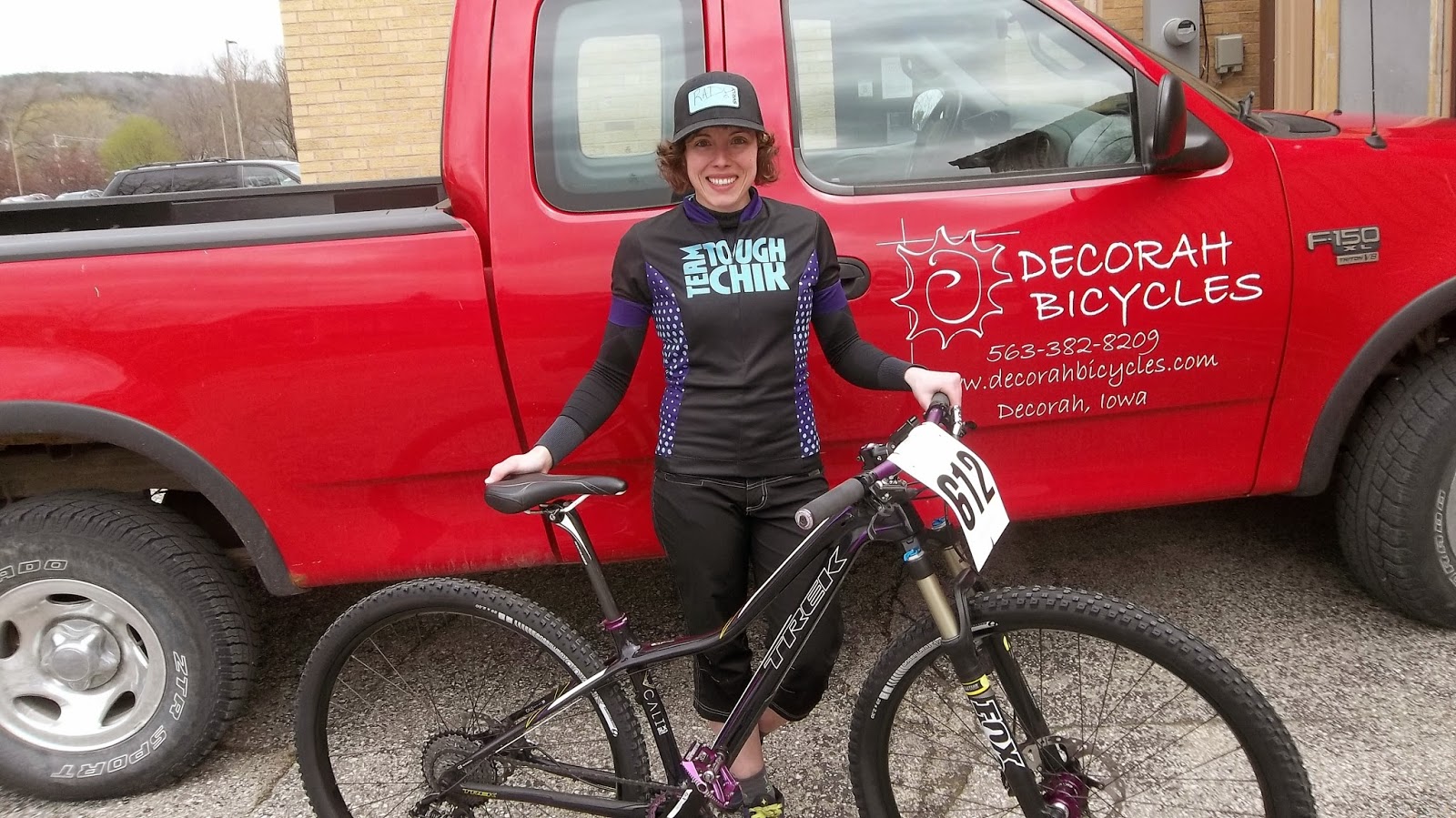 All of the pre-race jitters I had stuck with me up until I hit my inhaler and waited at the start line.
Enter the Decorah Time Trials. My second official event and my first "dirt" race.

Personal opinion blip: to some random ninja who was unimpressed of the PWC event- I don't know what counts for a "race"..but you have a start, finish, and prizes for placing at PWC.

Henceforth, it's a damn race. Enjoy it or don't take away the fun from someone who did.
Back to Time Trials....

I was nervous and sought some insight from two seasoned riders, one of which I see as an alternate father figure of sorts- Mr. Kester.

He and his friend both gave me sound wisdom. "Race for yourself" and
"Don't worry so much about all the stuff in the beginning.
You really won't find your groove until later, probably closer to Little Big Horn."

I got in line behind the rider next to go. My heart was pounding. (sigh) The rider left. You get a minute of riding before the next one is sent off, so in that time you position yourself and Ron "Chewy" Moffit holds your bike. He held mine just as he did those who would be clipping in, so I decided to take advantage of that and position myself on my pedals and be more "ready to go" than hoisting myself off.

A woman to my left said, "You're the first female to race today!" ...OOOH?! Oh...boy. *GULP* How would this work? I knew there would be fast women out here today- just how many and what they looked like, I had no idea. Well. No time to worry about that.

I heard "60 seconds" and next thing I knew Travis came up to me quick and gave me a good luck kiss! (This is something that given his personality and general pda thoughts, was something that I did not expect!) Then it was time to go! I pedaled hard, but reminded myself to not gas myself before the ride even started. As someone who isn't used to this sort of thing, I feel the pressure could easily build and one could work too hard too soon.

I kept going my pace, not really knowing where I was in terms of time. Travis was going to go fast to catch up to me, but where was he? It wasn't until I hit the second climb on North 40 that I saw him from below. I was hustling my bike up the hill as I had lost traction- I was riding a race on tires that were different- the back one a little more narrow with bigger lugs for the potential mud we would have (but didn't have). Not like that was a complete make or break, but for the terrain and trail conditions, they were not shining their best.

Travis was then behind me the rest of the ride. Really there weren't other people until we hit Dust Bowl to Little Big Horn. The climbs were tough- I was not feeling extremely race ready due to various things which one could just point to saying "that time of the month." However, I'm bullheaded enough to tell my body and hormones f-u and plow through it all. Gracefully? Probably not. I managed to make the second hairpin turn on LBH, but the third one I just couldn't. So I hustled my bike up to the top- Travis had noted a fast rider was behind us, so we respectfully waited for him to pass before we got back on our bikes. Rather stay put where it's steady ground to stand on, then hustle off when it's more steep or off camber.

On Little Big Horn was also my first time passing someone-and I felt so damn awkward. Thing for me is I hate passing if I don't know 100% without a doubt I can stay ahead. Nothing makes me feel more self-conscious than playing a passing game. I wanted nothing to do with a You pass, They pass. Travis ushered me, of course I fumbled. I had Travis go ahead, then I started up again- he waited off to the side and swapped positions with me once we were both past the fellow. I would say that by the time I got to the East Pines, I was in a bit of a rhythm.

Things I noted:
I picked a good starting time for myself. People were either exceptionally  faster than me and if so, passed. People were not going to instantly come up on me- which meant I was riding at a pretty okay clip. I found a nice middle area.
What you can accomplish in a minute is fascinating.
I had to tell Travis to refrain from giving me tips on riding/handling. I knew that I was not in a position to really listen or put things into action. I came into this knowing I am still a bit of a "green" rider and that where I can't flourish in technique, I will simply make due and try my damnedest to just not get hurt.

Fred's was fun, Raina was taking photos- I ended up having a huge smile on my face because she shouted "WooHOOO! Go Josie!" *Bam* the so-called "Trademark Josie Smile" came into play.
People hooted and hollered and I laughed- I'm still not used to attention- yeah, all riders get encouragement, but it just seems so special to me. I love the comradery.

Old Randy's would not be ridden today. I rode it Thursday. Great. But towards the middle I said "It's not happening" and did my so-called Death March up to the top. Another local rider, Gunnar, rode up past us. He's really amazing. I said in-between asthmatic breaths- "Next year I'll ride up Old Randy." (I say this but really I mean, we'll see.)

At the top of Dunnings the second half of the race began. I did my best to kick it up in spots where I could go fast. Otherwise I just continued to keep my wheels rolling. My legs and body would go back and forth between "bonking"...I never refueled during the race with GU or sugar. (I should've had something.) And eating prior to was minimal as I was worried about side aches or cramps. I had to work myself through my bonks with sheer determination.

When we were heading towards Snail Trail, we saw Ward and Nikki. In my head I told myself "work HARDER!" Thus far, I had not seen another female. I'm not super competitive- but I felt like I had to redeem myself for how I struggled during PWC. I don't know. Friendly competition and just seeing how hard you can push yourself I think isn't a terrible thing. It gives you a goal. Something to strive for- it's just if it doesn't happen, don't beat yourself up over it.

Snail Trail was hard. We had an experienced rider come up on us, we let him pass. He fumbled a bit and I tried to keep going but ultimately petered out. After my glorious tip over off to the side, he and Travis talked a bit as the guy knew someone that Travis also knew. "So and so says hi!"

He continued on, I continued after- and then it was doing all of the "features" on the upper half of Snail Trail. Little log pile, etc. My legs were saying "No more!" and I kept pedaling forward.
Rode hard down the straightaway, down through Captain's Loop, and then we had to make our way over to Upper Randy's. That was something that neither of us knew was part of the race- so on Tuesday we never included it in our trial run. OOPS! I had no concept of time, so I didn't know how I'd do overall with this added in.

On Upper Randy's we pulled aside on one of the hairpins for Eppen to pass. The younger fellow we had passed prior was right there, too. It was a scramble to get going again, my stress was up because I really felt like we shouldn't have passed the kid.
Rattlesnake came as a surprise as I managed to ride it dabless (FINALLY!) and once we hit River- I knew I had to bust my ovaries- but I was so close to being done.

I made the steep hairpin, rode hard, made it up the steep climb, came behind Pearch and Ward. It was handy, they kept me from going the wrong way! River is a fun trail but at the same time, it has a lot of bends and turns, which is not something I feel adept at doing fast, quick, and adept. I did my best. Travis said he saw Nikki- he knew that would be my carrot to push me to go "just a little harder."

Came out to the straightaway and he yelled something like "Hammer it down!" and I geared to a hard gear and just busted it as fast as I could. Not far behind Ward, I crossed the line. Yelled or at least said hopefully loud enough for someone to hear "612", rolled over to a grassy spot, and laid my bike and body down. I was exhausted! Nikki was next shortly after, then Travis (who opted to wait so his time would be close to mine rather than "better" as he wanted this to be a race we had done together.)

I was the first female to cross the finish line.

I finally got some legs back, went over to Ron "Chewy" Moffit and said "I want my high-five!" (This was due to my having a dream where he gave me one.) Then I got a hug! Woo!

You didn't find out your results until the Awards Ceremony. I had a guess based on my computer- but the time was off as it accounted for my entire ride to the start and then some. But it was under an hour and thirty minutes.

When results were posted- I had Travis look. I guessed I'd be in 5th place or so...and was perfectly content with being the "First Lady" in other ways. However, Travis came to the table and said "How would you like 3rd?" and I literally dropped my jaw. Raina wished she had recorded my reaction- it was completely stellar! Needless to say, without having "trained" and having some asthma issues, I rode very well for a second season rider who was up against some really strong and talented women. (9 women total! The most ever to race, or so someone said.) My final time: 1 hour 15 minutes and 03 seconds. (What can I say, I like the number 3.) (p.s. I had posted the wrong time posted, too many 3's!) 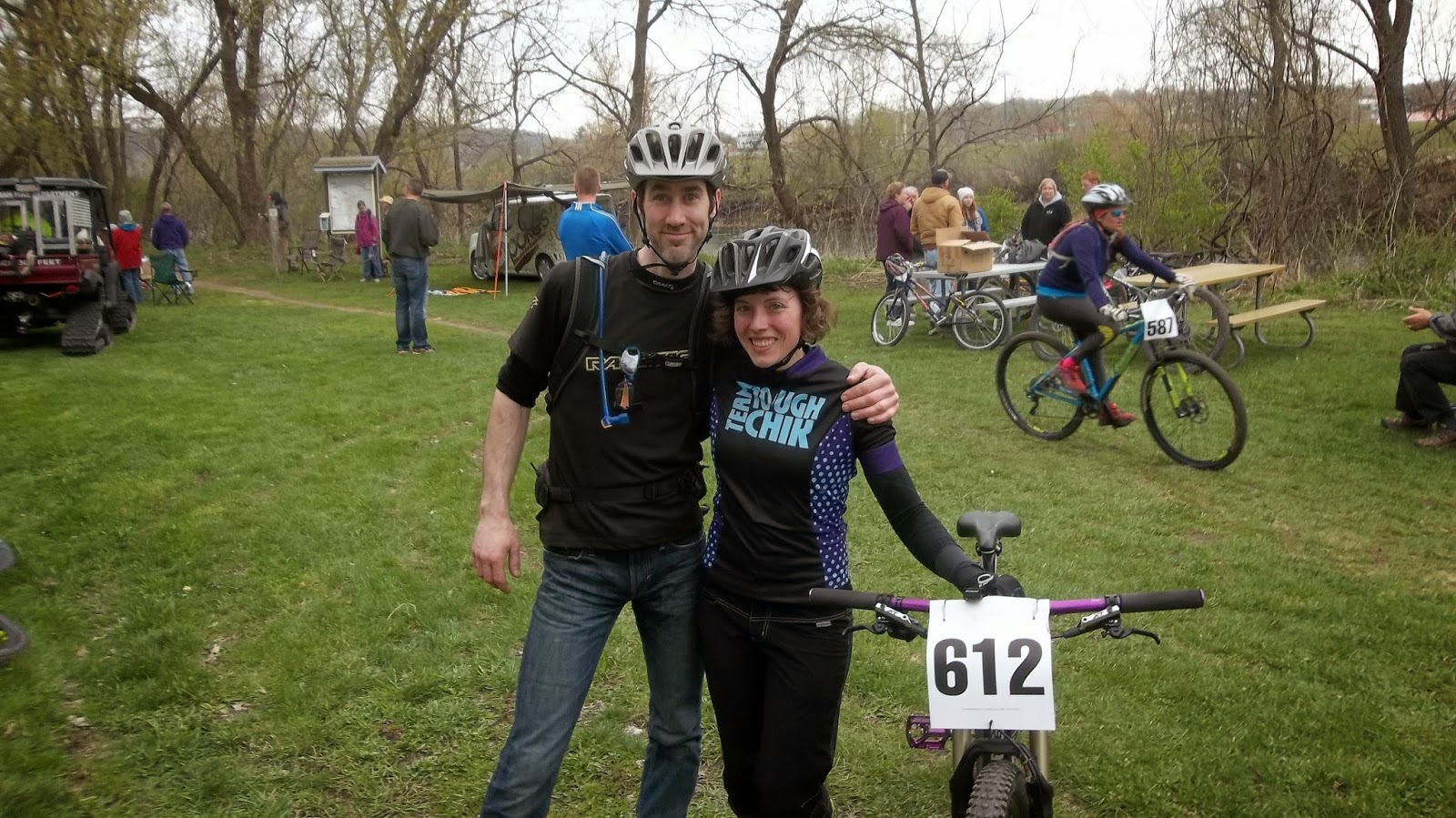 So much positive feedback was given, and apparently I've impressed some individuals. Quite a few seasoned riders said that for starting out- I have some really good potential for being quite the rider. Do I? I guess we'll find out. I'm always going to prefer riding my usual speed (athletic, not hammering) but if I upped my handling a bit better and worked with momentum a bit more (and ate more instead of letting nerves thwart me!) I might have something to work with.

It's pretty exciting to know there is a possibility for me to grow even further with something I love, and maybe inspire others to take the chance and just try something they never thought they'd ever do.
You are never too old to learn something new, develop your passion, and grow with it. Take chances, do your best, and overall love what you do. Maybe you'll place, win an award, but the true reward is just being true to you.