Adventures of the First Lady- Changes 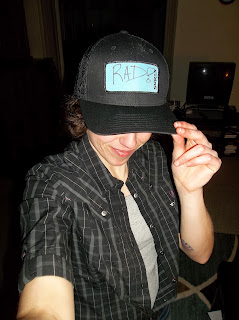 The week at the shop had been going steady as usual. There are the typical concerns that everyone has with a business. Bills needing to be paid, etc. However, things (overall) are going well. Repairs are being called to come in, others that were repaired are being picked up. Bikes are being purchased. It's just waiting for the season to really "kick off" you could say.

Weather is becoming more favorable temperature wise for riding- so as soon as it hits 70 on a regular basis, more rentals will happen.

Rain had been around during the week, and of course overcast skies.

Not completely work-related, but Travis and I certainly had a stressful day on Friday. Our landlord informed me that at the end of the month he would be attempting to sell our place.
(2 apartments, we live on the bottom level.) Now, some people would say "It'll be okay, another landlord will buy it." or "It'll maybe be a year before it sells."

Fact is, I came into the relationship with Travis bearing 3 gloriously wonderful cats. 3 cats to which make it almost impossible to find rentals in Decorah. It's what you get when you take for granted a past relationship and living situation. However, they are as close to kids that I will ever have- so they stay.

Uncertainties overflow. New landlord could decide no pets allowed, also raise the rent up and not include utilities anymore- making this place as expensive or more than us buying a house.

So....we'll go to the bank on Tuesday to see what can be done. It's a big step. One that I thought I would've taken a few years ago but it never came to fruition.

We may also need to hire another helper soon. Something that we weren't expecting and makes us sad, however, we'll get through it one way or another. It's funny, because in the next month or so I had set up a schedule that was going to flow so nicely with the two new hires- now it's kind of not so fluid anymore. Or has the potential not to be. My perfectionist side is again thwarted. My  nerves are up and I'm basically waiting for another ball to drop now.

In July Travis and I were given the opportunity to go to a trade show called SaddleDrive- and we had hopes the shop would remain open in our absence. We're not sure if that will be the case. Of course we will let everyone know what is decided as soon as we know.

I feel a bit helpless again like I did at the Co-Op when I was acting as 1/2 FE manager. All my ducks were in a row, it was great- BAM something got caught in the spokes and all the work I put into it just fell apart. I feel sad, as tho I am a disappointment and didn't do "my job."
It is what it is, and we'll make it work however it happens. Boundless determination. Tho this may mean that regular Sunday rides for guys may not happen every Sunday- and will be more once a month than not. We'll have to see.

Saturday was a good day at the shop. Steadily busy but not super crazy. Kai and I worked with several customers. Some bikes were sold, two that we didn't think would find a home anytime soon- but did!

Popular purchase lately is the Race Face Piper short- we have a size Small left in the black color and Medium and Large in the turquoise color. I say get them now while the getting is good because it may be August before the come back into stock! 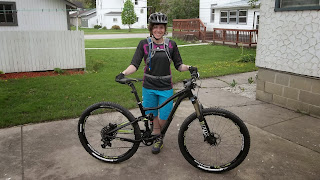 Saturday was also New Bike Day for me and I got to go on my first ride with the Trek Carbon Lush! Super excited! It is my first experience with a full suspension mountain bike as well as 650b wheels. The ride was pretty epic, granted I did have some struggles on a few climbs (lost traction on my back tire) I had some super fun on some descends- Old Randy's especially. I scared myself a little with how fast I went and almost creamed a chipmunk! Poor lil' fella, but he made his grand escape and I rolled on with a sigh of relief.

So here's to another week down and the start of another.