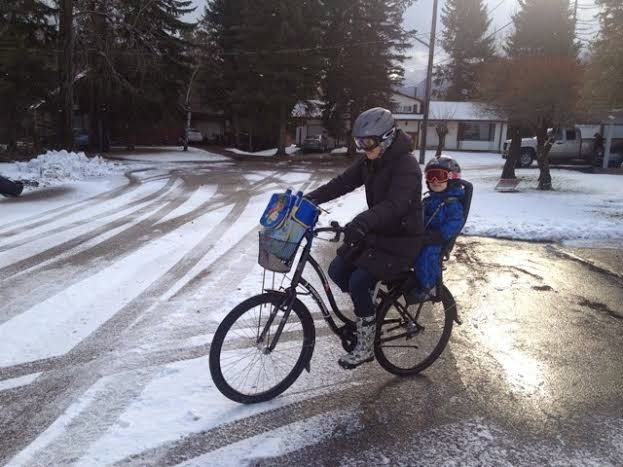 How do you transport your child? Seat or Trailer?
Our son (nearly five) rides most places now. He is on a Spawn Cycle bike (check them out, they are amazing). I still use a Yepp Maxi when we are going further or have to be somewhere on time, but we started with a Burley trailer. I can’t say enough good things about the Yepp! For one thing, it has a very high weight limit so it will last us a long time. Also, it has a quick release so that when I go get groceries solo, I can get more cargo on the bike. Our next family bike will be a full sized cargo with a padded rear rack and handle bars since our son is nearly 5.
For the trailer, I was disappointed to read that they are not intended for use behind a bike before a year old and in fact outlawed before a year in some places (NY). I had to do a lot of reading to figure out what the risks were and what other people were doing. There are options but we ended up attaching the bucket car seat inside and it worked well until my son was supporting himself.

What added precautions do you take when transporting a child? (How do you keep your child safe and what do you avoid?)
We were fortunate to live on paved city bike paths and never needed to go on roads when my son was little. It was part of the reason we lived where we did. 18 months ago we moved to Fernie, BC and other than the usual precautions (helmets and biking on the defensive) we don’t really need to worry about biking as people are very friendly and bike conscious.

What is one thing you would like to see different about bike safety/transport in general that would make you feel safer transporting your child via bicycle?
Designated lanes where possible are wonderful but I think it comes down to education of both drivers and cyclists. We need to respect each other and I’ve been trying to teach my son to understand what it’s like to be a driver around cyclists (especially unpredictable preschoolers!). Defense riding sounds really negative, but to me it just means that we are smaller than cars and harder to spot. I always ride with the assumption that the driver doesn’t see me and I act accordingly.

Have you ever had any close calls while biking with your child? If so, what happened and what was the outcome? Were you fearful to ride with your child again? How did you overcome?
We have a bit of a steep hill to our house and unfortunately my preschooler has no fear of speed and thinks it’s okay to go down with no brakes! I say “be in control” rather than “slow down” because I think it makes him think about his own comfort level. That said, it only took one time of fearing he’d end up in the river before I made him walk most of the hill and telling him that while he might have felt in control, I wasn’t comfortable with it at all!

What were the biggest challenges you faced with biking at different stages of pregnancy?
I didn’t bike when I was pregnant because it was winter and my commute was 20km. My last 6 weeks of pregnancy though all I wanted to do was ride. The only bike that fit my expanded body was my downhill squishy bike so I rode that around the neighborhood. It’s not at all ideal for street riding!! 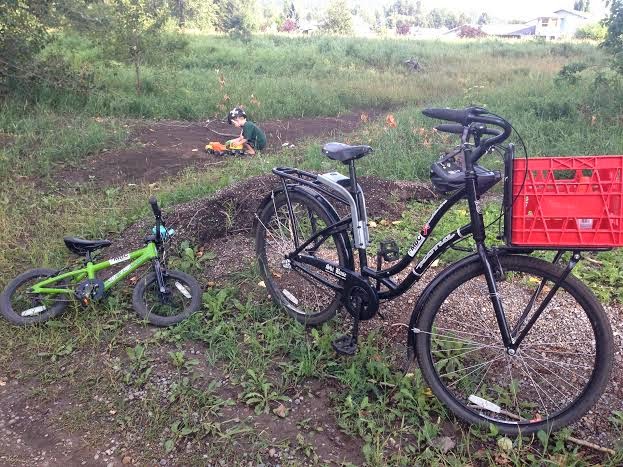 What products do you recommend as a bike riding mom and why?
Definitely look at www.spawncycles.com  – these are high quality bikes for young kids and they are expanding their product line every year. www.yepp.nl - whether you want kids up front or in the back, these are amazing.

What are tips/suggestions you have for starting a bike riding routine with your child?
It’s great if you can start early so it’s just a fact of life! It helps when it’s fun (for example riding to get ice cream is a regular activity). I think it’s really challenging if the parents aren’t cyclists as well but it’s never too late to become one! My 70 year old mom just learned to ride at the end of 2012 and last summer was the first time she really got to ride more than a couple of days. My son learned to pedal a bike on Mother’s Day 2013 and was more comfortable than my mom very quickly. He would call down the street “You can do it Nana!” We rode as a family after dinner all summer and it was a great routine.
Labels: interview