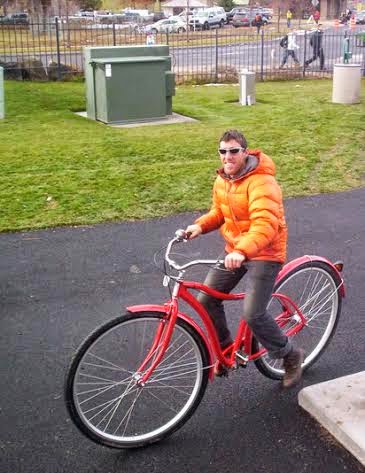 Meet David who lives in Decorah with his wife, Deneb (check out her blog interview!) and their dog, Mesa.
I've known David for as long as I've worked at the Co-Op and it was natural for me to ask him if he'd want to contribute to a blog interview for this project of mine. I'm sure glad I did! It's been very fun to learn more about the bike riding individuals in the town I live in. So a big "Thank You" to David on sharing his experiences and what he's up to!

When did you first start riding a bike?
When I was little (maybe 5?) some family friend dropped off a little red 14” fixie that their kids had outgrown. I’m pretty sure that my folks had intentions of putting training wheels on it and teaching me to ride but things never got that far. I nabbed it when they were all inside and just started rolling around the block. Guess I just never stopped pedaling.

What motivated you to ride as much as you have over the years?
The freedom and the wind in my hair. I love that every ride feels like an adventure.

Have you competed in events? If so, what were your reasons for competing?
I competed for a few years. Probably for the same reasons that little kids race around the block. It’s fun. There was a pretty short period of time that I wanted to make a career out of racing but that ended as soon as I realized everyone else was faster than me. That’s not the kind of bullet point you can really build a resume around.

What would be your favorite competitive biking event?
I’m a fan of road racing. I like the strategies that play out between the riders, the teams and race directors. When you started learning more about the sport you see just how much a team sport it is and I like that on any given day the winning team has to be both the strongest and tactically the smartest.

What kind of riding is your favorite? (paved, gravel, mountain, etc.)
I’m more prone to get out on a road bike for sure, but it is pretty damn fun to rip through the trails and gravel roads or raise some hell in alleys.

Do you remember how you felt on your first mountain bike ride? (If not a mountain biker, how about first commuter ride, paved trail ride, gravel, etc.)
That was a pretty long time ago. I don’t recall, but I obviously liked it enough to keep rolling. We didn’t have any MTB trails where I grew up. My first “legit” mountain bike was a lava orange and black GT outpost that I’d take bushwhacking around in the woods through downed trees and briers. Those early adventures typically ended with a solid amount of blood loss. 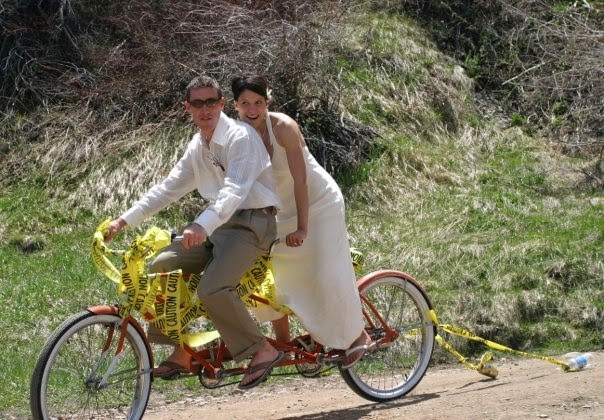 If you had nervousness at all, what do you do or think to overcome it?
I started biking when I was in the core of my “young and dumb” years. I’m not sure nerves ever really entered into the equation. These days, I’m not trying to overcome nervousness; I just go slower.

Do you have the same satisfaction of riding mountain bike trails slower rather than faster?
That's a great question. I think so, though I usually catch myself going harder than I intended. Mentally I approach mountain biking the same way that I would approach going for a hike in the woods. I like the sight and sounds of nature and a little sweat feels good. I like riding with others, but it's pretty common that getting on the mountain bike is a solo journey for me. Without someone to keep me in check, I find that it's easy for me to get bit by the bug. That's probably why more frequently than not I come home all scratched up after trail ride. It's always fun though. That's what's most important.

How have you liked having a partner who also rides here and there (with you?) It seems you both really do your own thing but both have a common like for it.
Yeah, she plugged into the mountain bike scene around here before I did and she can rip the trails pretty good. With competing on the road over the past number of years, I had a tendency to let the dust settle on the MTB bike. I really enjoy when we have a chance to ride together so I'm hoping that will happen a little more frequently now that I'm not working toward any race goals of my own.

Do you use clipless pedals? If yes, what are some tips/suggestions for beginners that you would share? If no, are you thinking of trying it out at all?
I do ride clipless pedals. There are many different kinds of pedals to choose from but most will allow some adjustment to tighten or loosen the release. You favorite bike shop should be well versed in helping you choose the right pedal and getting you set up. I’d start by practicing clipping in and our on stationary trainer or if you want to jump right in and roll, try only clipping in and releasing one foot at a time until you are comfortable with the action. It won’t take long before you are not even thinking about clipping out when coming to stop; it’ll just happen. Ta dah!

If you are a commuter what are some of the challenges you face and how do you overcome them?
I use to commute year round. Now I work from home and my biggest challenge is getting out of bed. When I was commuting the biggest challenge was a really hard down pour. Not so much the biking itself. Once you’ve made the mental shift to commute, it’s pretty easy to just roll with the weather. But… mustering the motivation to don the whole team Aqua get-up never gets easier. Rain pants are the worst.

Do you commute even if the weather isn’t ideal? Why or why not? If yes, what do you do to make it more tolerable?
Yeah. See above. Why? My wife and I shared a car and her commute was a lot longer. My only two viable options for getting to work were walking or biking. I make it tolerable by singing or beat boxing, both of which I’m horrible at. So that’s entertaining.

Have you had a bike biff? If so, how did you recover on a physical/mental/emotional level?
I’ve had quite a many. Hitting the deck is never an enjoyable experience but if you ride a bike you’ll go down eventually. I try to not let it get in my head. It takes a little while to get comfortable on all levels after crashing but that’s all good.

What do you love about riding your bike?
Coasting.

Now I sound like a snoop-but the Credité Velo-Trek? Is that something you've started up? If so-would you like to tell us about it? Also, you were off riding somewhere, yes? Was it for fun or part of a team competition?
I'd be happy to. The Credité Velo-Trek project has been in the making for close to a year now. Last summer I was approached by a (then current) teammate of mine to assist in the formation of a Domestic Elite cycling team. Maybe I should expand on that just a bit.

There are many levels, or categories, of competitive road cycling in the US. To simplify the structure a bit, if you have never competed in a road race before, you would enter your first race at the Elite Category 5 level. From there you would advance through the ranks to Elite Category 1 and then on to Domestic Professional. Our team is somewhat of a composite/in-between level of Category 1 and Professional. It's road cycling so by law it must be irritatingly complicated...

Last fall and throughout the winter, we reached out to a few companies to help get the project off the ground. We were able to tie in with some really fantastic partnerships and in February of this year the final pieces sort of fell into place. I'm not racing but I did take on the General Manager and Team Director roles.

In early April we hit the road with a car full of gear and a trailer filled with even more gear. There are three primary professional road cycling calendars for racing in the U.S. - the National Road Calendar (NRC), National Criterium Calendar (NCC) and the USA Crits Calendar. Our team raced at three NCC events in Alabama and North Carolina and one NRC stage race in Arkansas.


Our goal is to help young aspiring cyclist gain the experience and personal development they will need to become marketable to professional teams. I became involved with the project because I'm passionate about the sport and I respect how hard these guys work in pursuit of their goals. As far as I can tell, our program is the only program of its kind in Midwest which is actively acting as spring board to launch Midwest riders into the professional cycling world.
Labels: interview