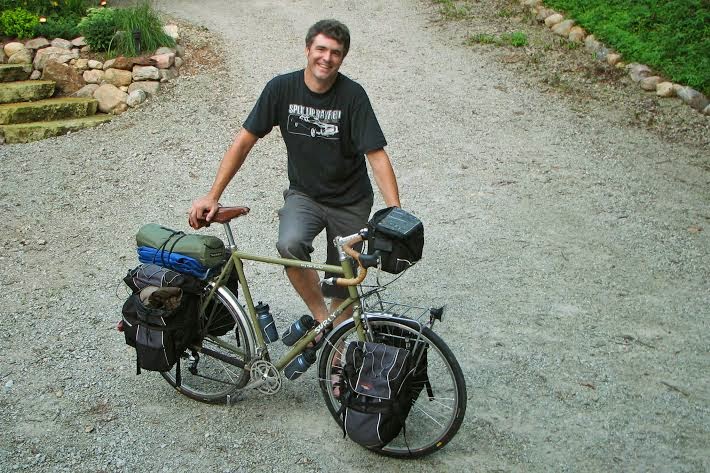 I've known Eric otherwise known as Sov (by many people I know in town) and now by his Surly moniker: Skip Bernet.


I definitely eyed the Surly bikes when I started researching what I wanted/needed in a bike. I will say that receiving my first Surly was one of my greatest days. Ever. The overall attitude of the company as well as the bikes themselves (I mean, check out the names!) intrigued me. A combination of no-nonsense but nonsensical at the same time. Bikes made to ride. Bikes that don't care about being "flashy" and bikes that are in every sense of the word: Fun.

When did you first start riding a bike and what has kept you riding all these years?
I grew up on a small farm north of Cedar Rapids and I learned to ride on our long driveway. Shortly thereafter, I was bugging my parents to just drop me off in the housing development near my elementary school. I just really wanted to ride around a neighborhood and never really had that opportunity – well, at least not without the danger of being pancaked by an 18-wheeler.
I raced BMX bikes when I was around 10-12. My family started doing RAGBRAI as a family vacation when I was 15. I raced road bikes when I was 18-21. I worked in a handful of bike shops in college and later. And, I was a bike messenger for a while in Minneapolis. Bikes have always been a part of my deal.

What inspired you to get involved with Surly and what do you enjoy about your job?
I started with Surly’s parent company, Quality Bicycle Products, in 2000 or so. I had been working in a bike shop (after teaching social studies for a few years) and wanted a 9-5 job with benefits, because those things are nice. I answered phones and was a sales rep for the whole company for a couple of years and just sort of gravitated over to Surly since the products and personalities involved were neither ordinary nor boring. I liked that a lot.
Now I’m the Customer Service Manager for Surly and I make sure our customers get the information they need to have fun on their bikes. I get to talk to bike shops all over the world, consumers who are excited about riding, and that’s pretty cool.

Out of the events/shows you go to, what would your favorite be?
Every year we have a big bike trade show in Las Vegas. That’s fun because I get to see all the yahoos that fill my weird little industry. But, I wouldn’t say that Vegas is my favorite place to be. Riding a bike out there is pretty sketchy.
I like the events where I get to visit bike shops and go for rides with people. I’ve had the opportunity to do this all over the US and in Japan, England, and a bunch of other places. There’s a connection that people who love bikes all have. It’s immediate and pretty obvious. Bike people are an ok bunch. Riding with people is what we call “sales.” It’s low stress for sure.

What kind of riding is your favorite? (paved, gravel, mountain, etc.)
Man, I like them all really. I don’t much go for road rides anymore. I don’t like fighting with cars. I was hit once in Minneapolis by a guy who was aiming for me. It shakes the confidence a little.
Now, I mostly ride to get places and up in the dirt trails. I love riding with my 6-year-old wherever he wants to go too. 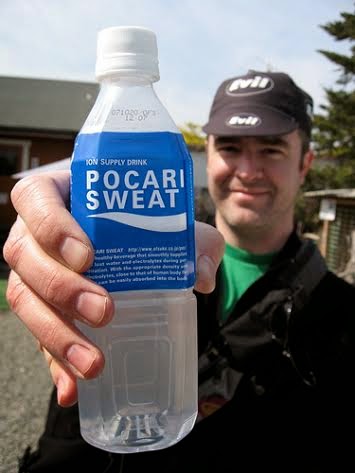 How many bikes do you have and out of those, do you have a favorite?
I have too many bikes. It’s a side-effect of my job and my hobby colliding. It’s also because I usually get bikes in a prototype phase to see if I can break them, so the price is right on those. I’d say I have about a dozen at any one time.
Right now my favorite is my Surly Krampus. It’s a 29” wheeled mountain bike with big big tires – 3” as opposed to the normal 2.1” or so. It makes for a very fun ride. Coming down Fred’s Trail in Van Peenen is probably more fun on the Krampus than it ought to be.

If you are a commuter what are some of the challenges you face and how do you overcome them?
I face living on a hill and having a kid. Honestly, I rode more when I lived in Minneapolis. Partly, that was because it’s super flat up there, and the other bit was that I didn’t have a kid to worry about picking up and dropping off places. I can still do that on a bike – we have a cargo bike called the Big Dummy that I can stick him on and carry his bike if I need. Still, at the end of the day I face a decent size hill to get home. I am easily dissuaded from climbing that thing sometimes.
I get past that by realizing that I don’t pay gym membership fees, but that it takes getting off my butt to make sure I keep things that way.

Sage words or advice for those new to commuting or riding a bike in general?
In cold weather, dress to be cold for the first 5-10 minutes of your ride. If you bundle up so that you’re warm when you walk out the door, you’ll be sweating and miserable when you get where you’re going.
Follow the rules of the road. Cars and bikes have a long way to go before we all get along. Until then, I stop at stop signs, signal my turns, and ride like I’m a part of traffic. That’s how I do it. I still don’t get much respect from some drivers, but at least I can say I’m on the moral high ground after they’ve hit me.
Get your bike tuned up at least once a year. We have two great bike shops in Decorah and they both will make sure your bike is safe and in good working order. It really is important.

Have you had a bike biff? If so, how did you recover on a physical/mental/emotional level?
I’ve wiped out on my bike a thousand times. Sometimes it was because I was horsing around, sometimes it was just one of those things. Getting hit by that car in Minneapolis was a real tough one. The driver and I exchanged a few words when I thought he’d driven WAY too close to me on a really wide uncongested residential street and he didn’t like something I said. His reaction was to run me down with his car and drive away. I tried to get his license number, but those things are pretty tiny when you’re mid-air. That still haunts me.
What I learned was this, however: There’s really not a way to win an argument with a person in a car. People in cars can have a real sense of anonymity and rage sometimes that I just don’t understand. They say things and act in a way that no person ever would if they were just walking by you on the sidewalk. I’ve tried to work hard on letting go and just trying to let people’s negative actions roll off.
It doesn’t always work.
That said, I’ve had a million more good interactions with cars than bad ones. I rode out to the start of RAGBRAI once and on the loneliest back roads of central Iowa almost every car passed me completely in the other lane with a friendly wave. That was pretty cool.

What do you love about riding your bike?


I like the silence. I like not burning gasoline. I like doing something that gets my parts moving. A friend of mine in Minneapolis likes to say this: Bikes are freedom, get some.
Labels: interview