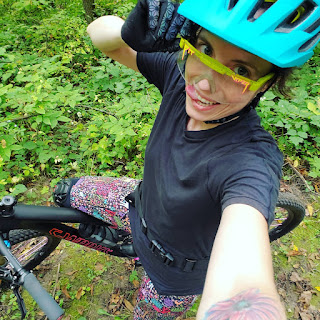 I looked down at my phone, reading the email from Strava saying "Uh Oh!"

I won't lie and say I didn't do an eye roll. More or less because I think their delivery is a bit...stupid. I think it's great that my QOM is gone- I have zero issues with not being the fastest on a climb. I'm one of the fastest. That's good enough for me.

Strava can be a great tool for some- it can help someone feel motivated. Some folks like the drive that competition (among others and with themselves) that Strava gives.

It can be a great tool for keeping track of stats, activities, etc. There can be usefulness behind it, without question.

I am just one of the folks who got sucked in and went to a darker place when I used Strava. It made me stop doing some of what I enjoyed (like stopping to take a photo or two.) It made me turn almost every ride into a personal race, even when I didn't WANT to. I would forcibly push myself to try hard, even when my body wasn't feeling it. I would become annoyed when something would happen that would stop my QOM seeking. I craved the boost I got from accomplishing a QOM and I felt defeated every time I fell short. I also got tired of pushing myself to ride past my comfort level in certain areas, just to try and "win."

For me, it sucked the fun out of riding, because I was someone that couldn't separate themselves from it.

What I'm trying to say, I think, is that I got sucked into this vortex of feeling like I had to continually prove my worthiness as a local mountain biker. This has been going on for a while in a variety of different ways, and only with my stepping back due to work and health reasons, have I realized what I've really missed when it came to my mountain biking #BikeLife.

When I first started mountain biking, everything felt fresh and new. It could incite fear yet curiosity...I had new things to accomplish! I could get that same adrenaline and dopamine hit from successfully making a climb or (scary-to-me) descent.

I would stop and take photos whenever I wanted- because I saw pretty flowers or leaves. Fungi. Animals. Whatever! I'm not a photographer per-say, but it's something of a hobby I enjoy. I've always liked taking photos of things that intrigued me, or that I thought were beautiful.

Then something changed. Mountain biking became easier and there were fewer things to feel accomplished over. What else could I do? The next step was to ride faster- and with that came racing.

I did. On flats no less.

I felt like I needed to put myself out there in other races too...Chequamegon, Pert'Near, Borah Epic, 45Nrth Whiteout, and Frozen 40 (in the 20 mile). I wasn't just a rider, I was a rider who could race and sometimes podium or at least be within the top 10! Amazing!

Truthfully. I had a love/hate relationship with racing. I enjoyed meeting folks (when my shyness didn't take over) and I enjoyed riding in new locations/on new trails. I had immense anxiety that would keep me up the night before and that stayed with me up until the race started. I could hardly eat anything the morning of, let alone take nutrition in during the race. I hardly trained, so anything I did was out of sheer determination, and perhaps a little bit of luck. I would feel like crap the day after I put forth a lot of effort. Usually, I didn't want to touch my bike for at least a week after. All of my season was me trying to get out for a bike ride almost every day, to try and get some sort of training in- and that resulted in burnout at the end of the season. I lost myself out in the woods, but not in a soul-fulfilling way.

After my dad died, I felt like I had been given a different outlook. If it's not bringing me joy, then I don't have to do it. So I decided I wouldn't race again- because it didn't bring me as much joy as I thought it would.

I also realized that I stopped mountain biking for just myself- I turned it into something that I felt like I had to do for other people. I tried creating a women's mtb group in town but found that it was a lot more difficult than expected. I think, looking back, it would have better served me to maybe focus on introducing one person at a time rather than trying to make it a "group" at first. I put pressure on myself to create rides, and continually felt disappointed when it didn't pan out like I thought it would in my mind. The group and its lack of success became a direct reflection on me (in my mind) and that rolls around again to the whole concept of my feeling the need to continually "prove myself" in the eyes of other riders.

Then I pursued an ambassadorship with a bike company, and when I was accepted I was elated! This happened shortly after my dad died, and at the time I think it was a good thing. It helped to motivate me and get me out on the trails. Yet as I continued forward with being an ambassador for a couple additional years, I started to feel...empty. It's not exactly what I envisioned.

My time to ride became drastically reduced, and then when I could ride all I could do was think about the requirements I should be fulfilling- so I lost my ability to just bike because I felt like it- I had to incorporate purpose into each ride beyond just riding my bike. Also, the requirement of hosting group rides- I'm not ready to put myself out there to have 1-2 people show up if I'm lucky. I did that for years and that really bummed me out. Plus my work schedule makes certain days work best, and usually, those days aren't what works for other folks.

I realized that I gave away my personal freedom to just mountain bike.
I gave away my personal freedom to take photos that I wanted to take when I wanted to take them. Sometimes for content, you have to have a certain bike for certain pictures. I personally got tired of feeling forced to make posts when I just didn't feel up to it. I got tired of trying to get photos of myself riding a bike, but not being able to be out during the right time of day, or have the right look, etc. Continually "pushing" myself on social media all the time...I found that it took the joy out of the experience for me. I didn't have the same luxury as some of the other ambassadors, living in areas where there are cool features to ride on/off, and such. I didn't have the luxury of being able to travel all the time, either. I also felt like because I made the decision to stop racing, I was less valuable as an ambassador.

2020 I had one of the most fulfilling and joyful times on the bike when Travis and I took our trip to Copper Harbor. YES....sometimes I can be annoying with how many photos I want to take. Sometimes I want photos of me riding something cool simply because I want to see me doing something that I thought was scary AF or cool AF. YES...it can be annoying when I stop and say "I need to change the battery in the GoPro!" However, I enjoyed going back and making video edits so very much, even if I can't edit videos for shit. (Okay, I didn't do a terrible job, I'm a novice. Gotta start somewhere.)

This year has been a challenging year for my #BikeLife due to work and health. With my not being out on the trails as much, it's given me time to reflect on what I want for the upcoming season.

I want to bike when I want to and how I want to. No agenda.
If I want to go out on a ride to take a bunch of photos and play with the GoPros I own, I'm going to do it. Mosquitos be damned!
I like taking photos.
I like riding my bike and not feeling like it needs to be a race every time. I've crashed enough times going past my point of no return, I think that I'm okay with pulling the reins a little bit.
I like mountain bike adventure rides. (Like Point Trail)
I like sharing bike rides with others either with one-on-one rides or with the videos I create.

All in all, #BikeLife is literally a "choose your adventure" sort of thing. You can make it into whatever you want! You can be the Strava champ, a racer, a weekend warrior, and anything else in between that you can think of. It's a "You-Do-You" sort of thing. Perhaps you'll find multiple styles of bike riding that you enjoy and go back and forth between them. You can race. You don't have to race. You can commute. You can do whatever YOU want.

I put too much focus on areas of #BikeLife that weren't for me necessarily. I lost myself in the shuffle of trying to be what I thought I should be, or what I thought was expected of me. Really, all I want to do is ride my damn bike and take all the pictures. So that's what next year is going to be, and I really can't wait to bring you along for the ride! 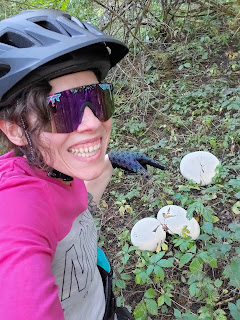