Not Really a #BikeLife Update 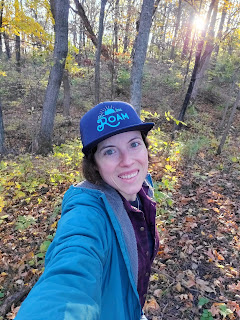 I figured an update on my uterine fibroid journey was appropriate given that is part of why my #bikelife was so held back this season.

On October 22nd I went to the Gundersen hospital in La Crosse, WI for a hysteroscopic myomectomy. Gee, what a mouthful! Basically, it's a procedure where I was partially knocked out aka "conscious sedation" and a scope was inserted into my vagina and past my cervix, into the uterine cavity. There is a little blade that is attached to this contraption, and they used it to chop up my fibroid. Only the fibroid material that is in my uterine cavity could be chopped up, so there may or may not be fibroid material left. The fibroid that was evicted to the best of the doctor's ability was one that was on the posterior of my uterus. From an ultrasound, I'm supposed to have a fibroid on the anterior of my uterus as well, and supposedly the same kind (submucosal) however, there wasn't any portion of that fibroid in my uterine cavity. So at this time, it's safe to say the one fibroid was the main problem causer. You can have uterine fibroids and not have any signs or symptoms- it's when you have symptoms that they become a nuisance and that's when you may choose to do something about it.

Post-procedure I was told I had a weight lifting restriction of sub 20 pounds, so that means for 2 weeks I'm not able to lift bikes off racks or in the workstand. I'm nearing the end of week 1 and decidedly bonkers about the limitation. Obviously, no sex for at least 2 weeks, and the first period after the procedure it's recommended to not use tampons. (For me, it'll be essentially the end of week 2 when I'll have my period, so there we go.)

I've had spotting on and off during this time period, and actually, as of writing this I had a couple days of nothing, and then this morning I had some mild spotting. I also feel slightly crampy again (very very minor, and very different from the cramping I felt daily for months on end.) So perhaps I put forth a little too much effort with removing a tire yesterday- truly I don't have a clue. I am learning to not have concrete expectations.

The first day after the procedure was rough for me- I did feel extra tired and I definitely felt uncomfortable. However, from the start, I've stated that the feeling of discomfort is different from what I had for at least half a year, and that alone makes it more tolerable. I am assuming the fibroid was impinging on some nerves that were contributing to chronic discomfort- hardly minimized by Tylenol, Ibuprofen, or Aleve. It was almost daily that my uterus had a headache, and it was very emotionally exhausting. I hurt, BUT it was different. Pain relievers also HELPED! I napped a good bit that first day after. I had a short day at work the next day and promptly went home to sit with the heating pad. Day 3 I was slightly active, took a nap, and found I needed to take fewer pain relievers. Day 4 I was able to go a whole day without a nap, went on a hike, and found a minimal dose of pain relievers worked just peachy.

Progress has been made, but the situation is not black and white. I could develop more fibroids...but I might not. My mystery fibroid may or may not do anything at all...could shrink, could grow...dunno!
I've decided if I have additional fibroid issues I'm going to heavily consider a procedure called UFE- Uterine Fibroid Embolization. A radiologist would do the procedure instead of an OBGYN, and basically, a summary is that they would inject something that would block blood flow to the artery that feeds the fibroid. That is if I'm a candidate for the procedure based on the type of fibroid- but from reading different articles it seems like a possible good route to go for a plan B. My hope is that plan B doesn't come to fruition. Enough reading has me set on not wanting to have any type of full or partial hysterectomy at this time.

The procedure has left me feeling relieved, and feeling the most normal I've felt for so long. I'm open to saying I'm afraid of losing that feeling as it's so precious to me right now. I can't let it dictate my thoughts on a daily basis, and I'm going to keep walking forward with the mentality that I'm done with this issue. However, I've researched, I know some options, and I will be my best and strongest advocate.

To my knowledge, no one in my family has dealt with uterine fibroids, so I'm a special unicorn. Hormones can contribute. Possibly being child-free has a contributing factor. There are a lot of unknowns about uterine fibroids, so anyone's guess is as good as any. I am starting to take an herbal supplement called FLO from OPostiv, to see if that can bring possible hormone balance. Personally, I would like to steer clear of hormone contraceptives as much as possible as I seem to be one who reacts poorly to futzing with my hormones with pills, IUDs, etc.

So, in short, I am feeling better and I hope it's for good!
I'm grateful to have a break from dealing with constant and chronic pain/discomfort. Because what I went through could be considered "invisible" and being I work in a public setting, having to try and fake it on a daily basis sucked a lot. There were days I wanted to cry, curl up in a ball, and just be left alone. Instead, I had to hustle around the shop, pop my pain reliever of choice, and bear it. It's a reminder to us all that we should be good humans to one another because you really don't know what someone might be going through.

Here is to a happy uterus, a happy me, and more #bikelife!