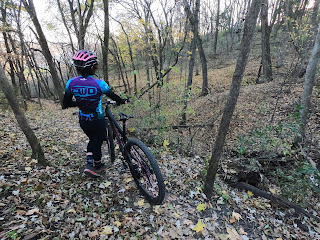 It's a word that actually feels the way that it sounds when it rolls off the tongue. The instant you say it, you want to take it back- because who wants to feel that way?

What? Embrace being uncomfortable?
Yes.

My life felt very uncomfortable.
I didn't feel like I knew who I was anymore. Everything that I would say defined me as a person fell away from me like bark falling off a dead tree. Bare and raw. I encountered feelings of depression, suffocating sadness, and anger.

I also found a gentler side of me.
I knew that I had to take better care of myself physically and mentally. It meant that I had to be kind to myself and not beat myself up over the lack of bike rides or when I felt like I fell short on general life stuff. I had to let myself feel grief and accept that it would be involved in my life for longer than I'd wish. I'd have the hurt feeling in my heart and it would simply be part of me.

I discovered strength.
For someone who absolutely hates making phone calls, especially when it's not for conversation, I found that I could do it better than I thought.
Once you have all of the facts in front of you- the social security number, policy number, etc. it isn't so impossible. Thankfully, even with the most challenging insurance policy, I did find someone who was willing to give me answers.

I dealt with numerous setbacks and challenges. At first, it would frustrate me, because it felt like things were mocking my situation. Eventually, I was able to take it all in stride and find a dose of humor along with the feeling of relief that my dad wouldn't have to figure out how to take care of all that crap.

I lived a whirlwind of a year in 2018 and I have a hard time believing that year truly existed. It did, but it was filled with so much that I feel like I really didn't have a life that year. Everything was on hold, other than the situation at hand, and that situation was the very definition of uncomfortable.

That discomfort permeated my life, and it brought up thoughts and feelings that I did not want to have. It also gave me a new sense of passion for wanting to make the most out of my current life.

2018 gave me:
Pain
Sorrow
Depression
Frustration
More anxiety
Focus
Knowledge (because when you have to deal with something you've never done before, you get a boatload of knowledge.)
Courage
Hope
Love
Motivation
Patience
Appreciation

Life before the loss was pretty alright. I was content and life seemed to be running like a well-oiled machine in most areas.
I was dealing with chronic shoulder/neck discomfort on a regular and feeling frustrated about it, but a solution seemed impossible, but I was determined not to let it drag me down.
Travis and I were happily dreaming of our next Disney trip for our 5 year anniversary.
I was strategizing all of the rides I'd be hosting.
I was planning out my attempt at trying to legitimately train for the season.
I was thinking about our bathroom remodel.
Life would consist of working, riding, writing, eating, and sleeping.
Pretty good.

After the loss, I had to accept that I would have to do things that made me uncomfortable. Simply willing it to go away wouldn't work. Trying to wake up from a dream that wasn't happening wouldn't work. It was reality and it was rough.

Growth happens from being uncomfortable. Your life is a garden that you tend to with pulling weeds, giving it nourishment, watering it, and harvesting. The storm (situations/experiences) is something that uproots everything you lovingly planted. Roots are ripped and torn apart, everything seems strewn around in chaos. Healing is replanting and/or tending to what remains in your garden. You reinforce things and make adjustments. All is not lost, it's just a mangled mess, but it's something that can come back better than it was when you started.

As great as life seemed, I had put a lot of my needs on the backburner.
I let fear of the unknown about my shoulder take away my desire to look into it further. I didn't want to spend time and money to be told that I pretty much was "built wrong" and I'd have to deal with it.
I let my goals for FWD get in the way of actually giving me room to breathe and have a life. I was going to fill up my plate and not have room to really do anything that I might want to do without feeling like it would be out of obligation rather than enjoyment.
I was going to (per usual) tell myself that going on a mountain bike trip would be great, but I shouldn't because I felt like it would be too much for my anxiety to handle. (Even tho I would really like to go and think it would be a great learning experience.)
I wasn't going to apply for an opportunity to be an ambassador, because I didn't feel as tho I would bring enough to the table.

Would I be happy with life?

I realized that staying comfortable can be detrimental. Staying comfortable doesn't inspire growth or change. I realized that I had more in life I wanted to experience. I made a promise to myself that 2019 would be better. I would take chances, seek out opportunity, and go on adventures. I might feel scared or anxious at times, but ultimately, I'll be doing something positive for my personal growth. Life is far too short to keep saying "no" to everything that (while being super new and scary) can be so much fun.

So far for 2019 I have...
Said yes to a summer vacation with Travis.
Started Physical Therapy for my shoulder (and have seen improvement, tho it'll be a long road ahead.)
Said yes to a biking adventure trip.
Said yes to being a Specialized USA Ambassador.
Said yes to leading rides, but also giving me time to do what I want to do.
Had a sweet Josie's Bike Life/Fearless Women of Dirt business card made.
Grown FWD with more Midwest chapters.
Overseen the build of a kick-ass new bike that I know my dad would want me to have.
Said it's time for a bathroom remodel.

Even tho I have said yes to a good number of new things, that does not mean that it's a comfortable yes. Some of these "yeses" are going to push my boundaries, but in order to grow and live a true life, I've got to. Here is to saying yes, doing more for myself, and being uncomfortable.
Labels: fearless women of dirt inspire personal