Welcome To The New Age. 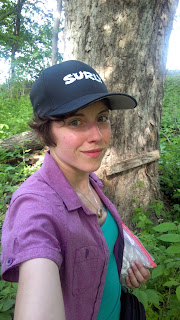 With everything going on, the world continues to spin on its axis while you're swimming in your own pool of ... "stuff."

It's the simple fact that life does go on, regardless of what is happening in your personal space. At this point, most are still understanding of the stress I'm facing. Knowing me and my personality, how I am so much more type A than I let on. How I fear unknowns. Yet I'm waiting for folks to call me out. Call me out on my lack of involvement with "life" right now. How I'm slacking at work. That I need to "shape up" and that I need to tuck my sadness away and be happy. "Fake it 'til you make it." Start leading rides, otherwise, FWD membership is pointless. Do. Do. Do.

Opinions. Thoughts. Feedback. Everything swirling around me. Some are welcome, and some honestly, just add to the pile. Worrying about hurt feelings. Worrying about "what would Dad think?"

It's one of the most humbling positions I've ever been in. Where you're simultaneously thinking about how a dead person would react as well as everyone else around you that you may or may not be close to.

I am not well versed in many cultures. I do feel that our American culture of mourning simply does not jive with me. I feel like there is no time. You have to get down to business almost as fast as the body hits the ground.

I suppose, for some folks, they are not the heir AND executor at the same time. If one isn't the executor, I think you might have more time to process.

My dad's memorial service was on Sunday, June 27th. The days leading up to it made the whole situation feel more "real." I was not going to be able to put on a stone face- my emotions were going to be out there. Raw. Vulnerable. I've gone away from the little girl who once stood by her aunt and said: "I'm so sad." I've become one who tries to hide and cover up feelings. I do not want people to see me for who I am, sometimes, especially the emotional side.

The events leading up to the memorial service were comical.
First, I forgot my reading. Thankfully we weren't far from home, so turning around was simple.
Out at Uncle Bill's we discovered that Travis temporarily lost my thru-axel for McNasty out on the streets of Decorah.
The worst...my realization that I left Dad at home on the kitchen counter.
"^^%$#$%#@&*^%*&^%$^%$#*^%(&^%" is probably what came out of my mouth.

Travis went back to Decorah. He picked up Dad. He also found my thru-axel, undamaged, on the street.

I had a laugh. Dad really didn't want to go to a big "to do." He didn't really seem to like people fussing over him, either. Very much a man who kept to himself in certain ways, even tho he enjoyed company. I think he liked company on his terms- but not in large groups as much.

My goal was to read my reading without choking up. I failed miserably. 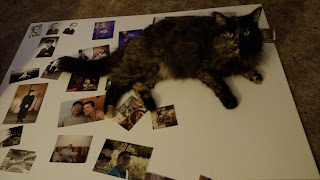 My cousins sang beautiful songs, a couple a bit more religion-based than others. Dad and I aren't so much religious as spiritual. During the last song, a breeze came up strong and knocked over the memory board I created as if to say "Okay, enough Jesus-stuff!" Everyone had a chuckle. It was pretty amazing before I arrived the air was still. After, there was a cooling breeze for us on a very hot day. After the service, it wasn't as pronounced.

I was still feeling uneasy.
Uncle Bill came over and we started talking- what he said almost brought me to tears.
Apparently, he and Dad had discussed what to do/what they wanted depending on who passed first.
Dad wanted to be cremated (I knew that.)
Dad did NOT want a wake. (I didn't know, but I suspected.)
Dad was okay with a memorial service like we had for Grandma and Grandpa, but nothing above that. (Wasn't going to have a choice in the matter, but I'm glad he was okay with it.)
Dad knew that I would likely sell the property. Bill said, "He wasn't mad about that." (I was never sure if he knew for sure, suspected, or if I told him. I did worry he'd be disappointed.)


I had made a home in Decorah. My ideas of living out in the country as an old woman has gone out the window. I know it's not for me.
Also, Dad's home was something he never actually shared with me or made into a home for us when I'd visit. It was always going to Grandma's. I mean, I literally can count on one hand how many times I had been inside his little house. ONE HAND. I have, literally no emotional ties to his place other than wondering why he never made it HOME for US.
The only part of the property I resonate with is the woods. That's it. It's not logical for me to keep almost 40 acres of land just for a hillside. Whether there was ever disappointment or not, I think Dad knew that how things transpired- what was considered "home" for him was never really a "home." In a way, I feel like he inadvertently made it that way for me, too. I'm assuming that there was a lot of sadness during and after building his little house, that it wouldn't house a family. So...he kept me away from it. 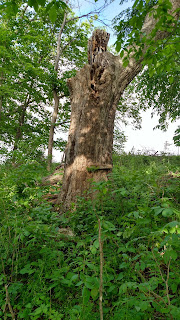 I could be entirely wrong, but it's what I get from it.

As his child, with answers unknown- I have to accept that they will always continue to be a mystery.

My dad was well-loved. With all his idiosyncrasies, he was loved by many. Maybe that's the beauty of having a relationship with him. It's the bits of his world he lets you into, willingly.

It was time to go up to the hill. At the top of the fire road, there is an old tree that has crumbled a bit. The only clue indicating that it used to house a tree stand was one lone board. I remember that tree vividly. I had this goal in my head that I would climb up dad's tree stand one day. I was scared of how high it was. I never did. Now it's a shell of what it once was. It was dad's tree.

I can't get over how strange it is for me to be in this chapter in life. It doesn't feel right. That's the part that bugs me the most.


Riding has been my solace, and so has rest. I hate to admit how this whole thing has taken so much out of me. I, honestly, still feel like my mind isn't all there yet. I'm still feeling as tho I'm forgetting this and that. It's challenging. Hugs are welcome. I miss his hugs so much. 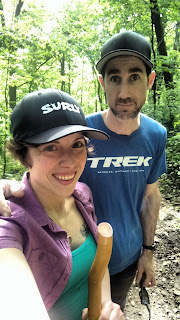 I know what my aunt said is true. He's okay now.
I know that he was aging before he wanted to. I hate how it was right under my nose and I was oblivious. He hurt a lot. I'm grateful that he now can be how he's always wanted to be and do all the things without having to deal with all the other crap he had to deal with. I'm going to be selfish and say I hate it. I'd like to call him up, in tears, and tell him how sad I am. I know it's all well and good but damn it. I.Am.Sad.

I also know that I am strong. I will get through all of this, and I will be afraid- but it's okay.
I will make decisions, and they will be respected because they are mine.
I might make mistakes, but that's human nature.
I will continue to be active with what fills me with passion and hope- because that's what dad did. It's what he would want.

I shall walk with him. I will ride with him. I'll keep him in my heart. When it hurts to talk and when the tears start to flow- I know he's crying with me, too.
Labels: growth healing hope loss personal