Breaking Down Barriers with Mountain Biking 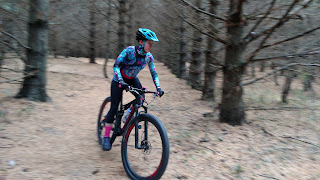 This year, give yourself the gift of proving to yourself that you can mountain bike. I'm serious. Keep reading.


I bet that you would be able to ride an easy trail or two if you simply gave yourself the opportunity to try.

Misconceptions of mountain biking abound due to there being several types and styles of riding off-road. More times than not, folks are seeing clips of "mountain biking" on Redbull TV and believe that is the only style of mountain biking out there. They see full face helmets, knee/elbow pads, folks riding down the sides of cliffs, and some even doing epic backflips. I'm not even going to get into the crashes that you may see from these runs. Because of media- this is what people associate to be "all mountain biking" while their location may not have Redbull-style mountain biking whatsoever.

My goal in life is to break down the stigmas associated with riding off-road. I'm not going to sugar coat the mountain biking learning curve. It might take a few rides before you believe me when I say "It can be what you make it." The problem is, many don't stick with it; they experience "failure" and find it too hard to overcome. They are scared, nervous, afraid, fearful, and the thought of expanding past that mindset seems impossible. They fall once and decide they can't mountain bike- it's learning to push past the "fight or flight" and power thru. It's not easy to talk yourself into "fight" but it can be done. 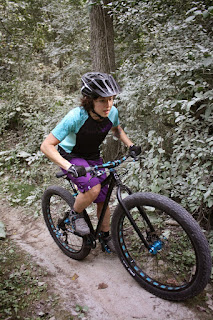 My mountain biking journey started out like so:
An attempt sometime in mid-2012.
3 attempts in fall of 2013.
It was fatbiking in the winter months of late 2013/early 2014.
Then I spent as much of my free time in May of 2014 mountain biking as much as possible with a lot of ups and downs along the way. Simultaneously loving and being frustrated with it.

My first off-road ride had me feeling stripped down and vulnerable. I barely had any handling skills as I was still relatively new to paved trail riding and commuting. I didn't know how to mount or dismount properly and I didn't feel stable or confident on anything other than pavement. Honestly, I was still at a point where I was likely not super confident with riding on pavement yet, either.

In 2014 I had a plus bike which boosted my confidence in terms of feeling more stable on the bike, but I became overwhelmed with everything I wasn't comfortable with.

Each time we went out we seemed to go somewhere new and I didn't establish a comfort level. I felt that I wasn't cut out for mountain biking. The lesson I learned: I wasn't giving myself a chance to grow, learn, or improve.

I also was holding onto fears that I used continually as reasons to keep myself from going outside of my comfort zone...I had all of the following worries and concerns:


The hardest thing for myself to learn was to give me room to accept and grow. In no way would I become skilled in a day. The second hardest was to actually believe what my riding partner was telling me and showing me. He went out with me with full intent to be positive, supportive, encouraging, and to not leave me in the dust. The biggest disservice I did to him was to not believe in him or his efforts.

You think you want to try mountain biking but you talk yourself out of it every time. My answer to that is "Stop it."

It's far easier to talk ourselves out of trying something that we feel we're not cut out for, but most times we do not feel we're any good at something until we've spent hours....and I mean hours applying ourselves. You do not start Pilates or yoga for the first time and do everything perfectly, especially if you haven't done it before. It takes time, patience, practice, and the ability to accept the stages of learning.

Mountain biking, riding off road they're one in the same and many people sell themselves short based on their very first attempt. I didn't start to enjoy mountain biking until I had spent several hours working past my insecurities. 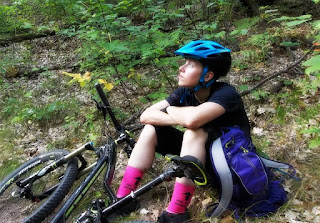 I learned many lessons from my first year of riding:
You don't have to ride fast to have fun.
Practice does make better.
Crashes are usually slow-mo and bruise the ego more than the body
After you fall a couple times, you get past the terrifying worry of "OMG I'M GOING TO DIE" mentality.
After you have your first accomplishment on the trails, you'll be hooked.
You'll have many frustrations during the learning process, but you'll be a better rider for overcoming them.
Flat pedals are your friends.
Giving yourself the opportunity to learn, grow, and become better at something new and challenging
is the best gift you can give yourself. 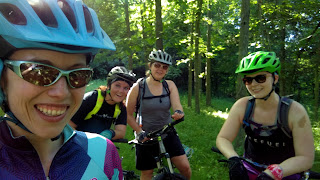 This experience inspired my next step: Fearless Women of Dirt

My goal for Fearless Women of Dirt in 2015 was to break down the barriers and stigma associated with mountain biking. Within a year of mountain biking, I became a self-designated spokeswoman of the joys that mountain biking can bring if, and only if, others would allow themselves the opportunity to experience it. 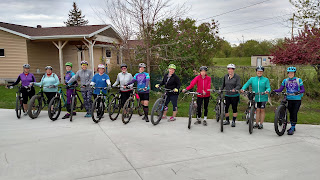 This has been a worthwhile and challenging experience much like mountain biking itself. Filled with ups and downs, successes and failures. If I treated the growth of Fearless Women of Dirt like many treat mountain biking, I would've given up after the first year. I learned what it's like to not have people believe you- until you've done a lot of convincing and they finally allow themselves to experience it first-hand. I continually have to break down the walls between myself and others- showing them one ride at a time that I truly believe in them. That I want to support their growth in this sport, that I will ride with them, and encourage them. I feel so fortunate to have put this goal and mission on my plate! I know I will have challenges to overcome and barriers to break down, but I truly believe that I can bring forth a richer mountain biking community. 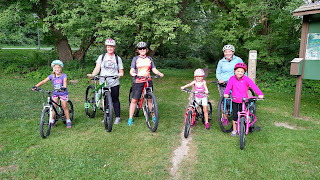 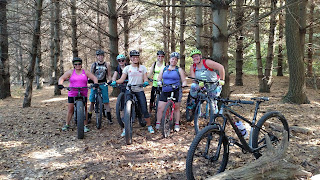