This is my third time having attended the PertNear 20 race in Viroqua, WI and I must say- it's one of my favorite places to be! I've said it for the past two years, but Pete and Alycann are awesome folks who know how to put on a great event.

I hoped that when Travis and I finalized our wedding date, that it would fall on the weekend of the PertNear. I'll admit for a selfish reason- I wanted a second day off from work! Really?

What better way to celebrate your wedding anniversary than going to a bike race? It gives us something to mark on our calendar for our anniversary and know we'll be in for a good time!

This PertNear would be special for two reasons:
#1. Our first race officially as #TeamGreenSmith because we were officially married on October 14th.
#2. This would be Travis' first time attending the PertNear 20. (Can we all say, finally?!)

The weather didn't cooperate for our outdoor, mountain bike-themed wedding, so I hoped with all my might that it wouldn't rain out the race. When I woke up on Sunday morning I kept looking at my phone for updates. When we hit the road I saw the update "You bet it's still on!" so I braced myself for what I assumed would be wet conditions. I wasn't too nervous, as I've had several wet and muddy events and seem to find a way to make lemonade out of that proverbial lemon.

My bike of choice (with a lot of thought put into the choice) was my Salsa Spearfish. A mini pre-ride of some of the course a week prior reminded me there are areas with rock gardens or rocks/roots that I'd feel better needling my tire thru vs. trying to float over with a plus bike. Sometimes I find myself not feeling the most confident riding my plus bike with wet rocks/roots because I tend to slide out more. If I can, possibly, avoid contact with rocks/roots, I'm better off. I have a very good relationship with my Spearfish and would say it's a bike that inspires my confidence.

It was a cool October morning with a damp chill in the air. Temperature prior to the start was around 44 degrees. I have found it difficult to transition into fall riding because the temperature dropped so quickly. I knew I'd fare better if I layered just a little, but not overly much to avoid getting hot. We would be on open road for 3 miles, twice, and that meant being exposed to cold headwinds (possibly.)

The most controversial point of my getup was the lack of ear cover. At the end of it all, I was able to say "I was right, I'd be fine, I got warm, and you worry too much- but I love you." Ha!

We stayed inside Bluedog Cycles until about 10ish minutes before the race. I decided I wanted to be acclimated to the temp more before rolling out. One of our friends, Benji, came from Decorah to join the race! Woot! It was time for takeoff and I made my way closer to the front- time to embrace my inner Rainbow Dash!

The rollout warmed me up plenty, and we made our way to the singletrack. I stayed behind a fellow for I felt he was going plenty fast for my comfort level. I figured I would pass once we got out of the woods and onto the wider sections in the fields. No point in going too fast at the start and flubbing up! I wanted to avoid crashing or causing pileups if possible.
We were on the road before I knew it, Benji caught up to us and we tailed him. He has amazing stamina and endurance! It was awesome to use Benji as my carrot and keep up with him as well as I could.

We arrived at Sidie Hollow and rode around the lake, which was beautiful, and then hit singletrack. This is where I knew I'd be challenged a bit with the trail conditions, but I took it in stride. We came to a section where Travis and I pre-rode on my birthday (I messed up on it that day) and I rode it clean! I was nervous I wouldn't make it, especially since another fellow didn't and he was off to the side. I get anxious when I have to pass folks in a spot where I don't know if I'll succeed or not. Travis was majorly impressed!

I had several more points where I rode sections where Travis was impressed with my handling skills along with a couple areas that just weren't worth trying to ride, so we walked. I was in disbelief I was doing so well!

It was fun when we were closer to the top and the trails snake back and forth, we kept seeing Benji and letting out "whoopwhoops!" I also liked it because I knew I didn't somehow get lost. At the top, Benji took a break at the aid station that was set up with hydration and snacks, we continued on...I forced some GU down and drank some water. Today was a day that the texture of GU, no matter how good the flavor was, made me gag. I will blame nerves for that one.

Things were going well, I was riding pretty alright even tho I did have to remount my bike after spinning out on a rock. While we were higher up on the trail we saw Benji coming from below- Travis suggested I up the pace a little. I was already thinking about the road ride back and the enormous climb we'd have to make out- I wanted to make sure I had ample energy for that. Okay, let's try this.


So I upped the pace, I came around a corner and hit some leaves (?) totally wiping out. I landed hard on my left front calf/shin and my bike came down on the opposite side of it. I hurried to get up, brush myself off, and pedal on. Damnit, that sucked. We made our way out of the woods and up the road to the next trail entrance- Benji was with us and I let him go first. I knew I wouldn't be able to go faster than him, especially now with my leg feeling like Gimpy McGimperson. Eventually, it felt less uncomfortable and I was able to get myself going at a solid clip again. It took me a bit to shake off that feeling of "Crap, it's slippery" and not go to the extreme of slowing myself down too much.

We turned to go down the trail that has this root/rock drop step that had thrown me for a loop the past two PertNear 20 races- this time I knew how to ride it....and succeeded! Yeah! I was so happy I managed to make it in front of the photographer. Even better!

We eventually exited the singletrack and started our march up the pavement back to Hubbard Hills. The climb was long, but not too bad- you just pick a pace and go. I wasn't able to really hammer it out due to my leg, so I plugged along as well as I could. It wasn't too windy back to the trails, either, so without having to fight headwind I didn't feel absolutely spent once we hit dirt again. This time we rode back exactly the same way we came; I was pleased to make it thru the rocky sections as well as I did!

It was awesome to see folks spectating, even tho it was a cooler day- when people cheer for you it definitely helps motivate you to put a little more "oomph!" into your ride! 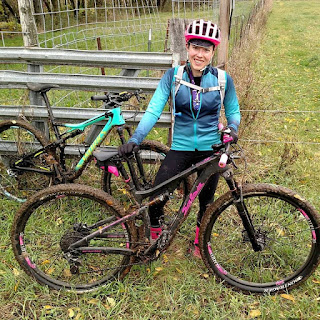 Crossing the finish, I was smiling! I was quite happy, a bit muddy, and almost started to cramp! I had Travis take a couple pictures of the muddy mess that was our bikes and we headed back to the truck. Of all things, I didn't bring clothes to change into....and I regretted that decision tenfold. I did have dry gloves and a different jacket to wear, but I was still chilly. Travis let me use his sweatshirt for extra warmth and we went inside the bike shop for a bit to warm up. My stomach was still not thrilled with the idea of eating a lot of food, but you can't say no to hot pizza! I helped Travis eat a few slices because sharing is caring.

Pete read off names for some raffle prizes, and I couldn't believe I won something! I joked that I would use the bike lock to lock Travis up with, haha! Pete is quite the character. Travis said he reminded him of Sov. I would love to be at a party with both Pete and Sov, I think it would be absolutely stellar.

Then awards.
I suspected, but I never actually, fully assume until I see it or hear it.
When Pete said something like "returning champ and newlywed" I let out a snort! Oh gosh!
I was giddy! I did it!
I wish I didn't have this habit of having crashes during a race, hopefully, next year will be a little less bruising. I have literally crashed for every single race minus Chequamegon this year! (4 out of 5 to be exact!)

Folks, if you want to attend an event by two folks who absolutely love their local trails and the folks who come ride them- you should sign up for the PertNear 20. Pete and Alycann are great people who do great things. The put smiles on faces with their bike shop and the trails, and that deserves support.

Until next year, PertNear20! Maybe the weather will cooperate and I can wear my tutu, either way, I know it will be a dang fine way to celebrate our first anniversary!