Somewhere during the middle of Chequamegon 40, I was riding next to a fellow who noticed mid-climb that I was riding flat pedals. "You're riding all of this on flats? You're a badass!" I gave him a smile and said "Thank you!" Confidence brimming; especially since 99.9% of the folks at Chequamegon were likely clipped in.

When I first signed up for Chequamegon and Gaston was just a bare frame with color accents, we had gone thru the process of choosing some double-sided ISSI pedals (in pink, of course) that would let me feel more comfortable riding clipped in. I like a wider platform for my foot, especially if I can't engage right away.

Then we heard classic Chequamegon stories of folks piling up in Rosie's Field and other areas. Soon Travis' insistence of my riding clips for that race went far, far away. HT pedals were mentioned; his anxiety of my riding the race solo would lesson knowing that I wouldn't be part of a pileup of people who couldn't clip out in time.

After I started riding off-road trails on a regularly, seasoned locals started asking me:
"Are you clipping in, yet?"
Always, the answer was "No!"
I felt ashamed because everyone was riding clipped in and I wasn't ready to try.

A summer about 2 years ago, several of my friends got the "clip in" bug and it was the thing to do. The pressure to switch was strong and I caved in, feeling ashamed that I wasn't the one to start this "revolution" of newly clipped in riders.
The first ride clipped in was on my FWD ride, and I was so afraid of making a fool out of myself that I had Travis drive me up to Van Peenen while the others rode trails to meet me. I wanted to be able to ride a hill or two in private before taking up my ride lead duties; I found it wasn't impossible and it resulted in an okay time. Of course I made the common mistake of unclipping the wrong foot when I came to a stop and I fell over. Great. I got over it as quickly as it had happened.

On less than perfect trail days I would ride my other mountain bike that was set up with flat pedals and on dry days I would ride clipped in. I know that swapping back and forth wasn't going to make learning any easier. My average speed plummeted and areas where I had grown to be more confident to ride had become intimidating again. I was torn, but bullheaded enough to not quit trying, even tho I didn't like it.


It was said "You're not riding clipped in enough to get used to it."

But I thought "Maybe I don't want to get used to it." 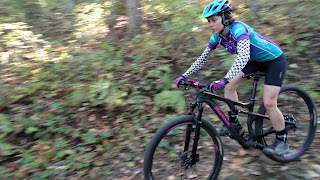 It was a struggle for some time, this battle between what was seemingly "right and wrong" for off-road riding. I didn't like how connected I was to the bike and I learned I relied on my clips too much. For example, I went back to flats when the trails became leafy and found myself spinning out on climbs. "Why?!" "Because you could be in a harder gear clipped in and still pedal thru it." "Oh...." Thus, the battle of emotions I had towards clips and flats continued. There are benefits that come with clipping in, but were they truly worth it to me when I felt so much of my carefree riding escaped me?

I started my timid walk into the clip-in world again for the 2016 riding season. One evening I was having a really awesome ride on my Cali on the mountain bike trails. I was feeling good, strong, and not focused on how "attached" I was. Then I clipped a tree with my handle bars while riding over 9mph. I was flung from my bike, forced out of my clips, and rammed my shoulder into the ground. My bad shoulder. I laid there afraid to move for a bit, feeling like a rag doll that had been tossed out of a bed. That sucked. Would riding flats have helped? Probably not in that situation, but it would've saved my ankles from feeling like I had rung myself out like a wet rag.

For my gravel rides I used clips and battled the same insecurities I had when using them on the trails: "Will I unclip in time?" and various other things. It didn't help that I had deep-rooted fears and concerns of riding on gravel in the first place. I found them useful for our rollers, but on the downhills I battled the worry of "What if I eat s***?" Visions of myself and my bike as one catapulting down a hill were playing in my head. Eventually I got over my high anxiety of being clipped in on gravels, but it took time. When it was closer to Chequamegon the clips came off and I rode flats. I wanted to feel like I didn't condition myself into believing I would fail based on my pedal choice.

With all of the pieces of this puzzle put together I feel like I can ride a bike with flats just as well as if I were clipped in. The oval chainring has been one of the best things I've tried! I felt it gave a smoother, more fluid pedal stoke and the efficiency it provided for getting up our inclines was fantastic. I also felt it was more beneficial for my knees.. It may not be for everyone, but I am of the attitude "don't knock it until you try it."

HT pedals are going to be costly, but they are absolutely worth it if you want a high-performance, super grippy flat pedal. The HT pedals I use are light and not bulky, which is excellent in helping me avoid clipping my pedal on roots/rocks. The pins are amazing, tho be warned, you will bleed if you smack yourself in the calf or shin. It's just part of riding flats. 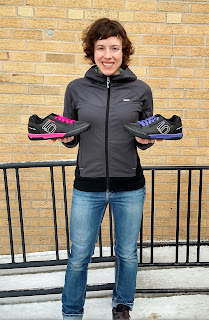 Five Ten Contact shoes are my go-to shoes for flat pedal riding. I really like the compound of the sole and the smooth surface on the bottom of the shoe, more so than the honeycomb of the Freeriders (non-Contact style.) I felt I was playing around with shoe placement much more with those, plus they aren't as stiff as the Contacts.

For me, a stable foot equates to a less foot fatigue, which is why a lot of folks go for clip-in pedals/shoes. Clipless compatible shoes are usually much more stiff than non-clip shoes.

For me, Freerider Contacts are what I need for a supported foot and Travis prefers to ride in the Canvas Freerider shoes as he likes to feel the pedal beneath him. It's all personal preference as to which shoe style will float your boat.

There is no pedal style that is truly right or wrong, it's all about what you feel will make you a more confident rider. Which setup will allow you to have the most fun on your bike, especially if you are new to riding off-road? Personally, I would ride flats the first two seasons before considering clipping in. Riding flats allows you to work on learning how to ride; you figure out traction, you learn how to lift your wheels up without relying on a contraption, and you have the ability to put a foot out easily.

When riding clipped in you are guaranteed to fall at some point for a couple reasons, you couldn't unclip in time or you unclipped on the wrong side. Clips also allow you to cheat with some skills; you can easily hop around like a bunny because you and your bike are attached, but you won't learn the technical aspects of that move if you only do it clipped in.

I was told a couple years ago by a friend and excellent rider that if I wanted to win races, I would need to clip in....and guess what?
I've won races....not clipped in.

There is a growing trend among the cycling community with more folks switching to flats periodically so they can purposely work on skills or re-learn skills. I think that is rad! It's a great way to spice up your riding, challenge yourself, and keep it fresh! 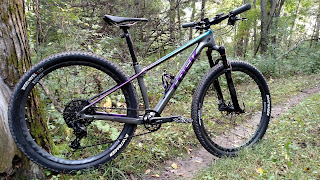 Many folks find benefit and enjoyment with riding clipped in while mountain biking, but it's important to remember that clips are not a requirement! You should try both pedal styles yourself to make your own judgement on what will work best for you and where you're riding.

All in all, you want cycling to be something you enjoy, so do what you want and have fun! Clips or flats, this is your #bikelife. Own it!
Labels: absoluteBLACK fearless women of dirt Five Ten growth HT pedals mountain biking personal women bike