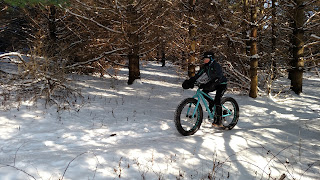 Last week, anticipation had been building during the day on Saturday for the first true snow ride of the season. It was like waiting on pins and needles for Christmas Eve to roll around when you were a kid.
My stomach had been all tingly and fluttery and I was ready to have the most epic snow ride of my year.


I knew it was going to be great!

Oh, Josie. Why do you make promises to yourself that you can't keep? I swear, there are times where I have a hunch yet reality is different. I envision myself riding this or that perfectly only to completely mess it up moments later and have a bewildered sense of disbelief floating around myself.

Travis was stoked. He would be riding the new Trek 9.8 that we got at the shop, sporting 27.5" wheels and 27.5x4.5 Gnarwhal tires that had beauteous lugs. I would be on the Snow Queen who had undergone a makeover. New, lighter wheels and my tried and true 45NRTH Vanhelga tires- I had ridden her a few weeks ago when conditions were dry and felt like she was more nimble, which excited me. I knew that this ride was simply going to be amazing...I would totally rock the climbs and feel like a superstar. 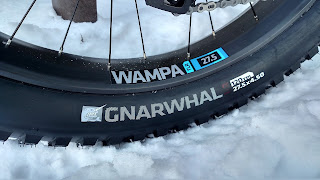 However, reality checks came and they came in plentiful during the ride. Travis was like a kid again, feeling absolutely invigorated and inspired by his new steed. I felt slow. I felt awkward. I didn't feel confident. I couldn't ride up all of the hills. I was growing increasingly frustrated and irritated with how completely wrong my hunch was.


The feelings that riddled my head were all based upon my habit of being too hard on myself. Also, my hopeful wish of being inspired by my fatbike were squashed when seeing how easy it all went for Travis. My bike didn't have larger wheels or as wide of tires and I didn't have a carbon frame. Not only was I putting unnecessary blame on myself and my snow riding, but I was putting blame on my bike. My pride had taken a hit and I was in a nasty funk- when I should've been elated for Travis as it had been so long since he had felt inspired by a bike...I was jealous.

We got to the pines and I followed behind, telling myself I needed to cut it out and just enjoy being able to play in the first "real" snow of the season. It could be worse.

Travis was patient, and I can't thank him enough for that. I got a hug, one that I feel I didn't totally deserve, but at the same time it was helpful to have. Being a grumpy curmudgeon was not going to benefit the ride or us one iota. My confidence inched back when we rode the upper portion of Little Big Horn, that is, until we turned around and Travis had me lead us back. Of course going the opposite direction and feeling timid with momentum had me spinning out on some uphill sections. The exact reason why I didn't want to lead- because I knew he'd get past those spots without issue. I also had to remind myself to stay seated more, which seems to take a ride or two before I really "get" it. It takes me back to the days when you got a week of roller skating in P.E. It took almost the whole week to get used to it, by the last day I was skating forwards and backwards like I had been doing it forever. It took 3 days of falling on my ass in front of people to get the hang of it; fatbiking seems to be the same way. I also had to figure out what was too easy or too hard of a gear, and for me, that takes some time and rides before I remind myself what feels "right" for the conditions. Word to the wise, be in a gear that feels one step harder than you think you should be in- because it's probably the right one and once you shift to an easier gear, you're S.O.L.

I wanted to ride back and try going up North 40 again as that was the trail that left me the most sour. I tried about three times, each time spinning out on a root. Travis wasn't able to get up the hill perfectly either, and said that the snow felt more slippery since we had ridden it and that I had to accept the fact that neither of us would likely make the climb. I hated to admit defeat, but sometimes you have to pick your battles. I was becoming hungry and I had no patience for wanting to try a futile climb...a lesson one needs to learn with mountain biking or fatbiking is when to call it.

You can exhaust yourself into a stupor if you want to, trying time after time to make this or that. One of the best lessons I learned is to give yourself a number- I will try this 3 times or 5 times and if I can't make it, move on. Try again tomorrow. Burying yourself in frustration will do nothing to boost your confidence or desire to keep working at the challenge until you conquer it. It's good to come back with a fresh mindset!

It's humbling to look back on an evening of riding and realize you took everything for granted. If I had not brought perfection into the equation I would've had a far more enjoyable time. I would've been truly happy for Travis and his ride, I would've laughed off my flubs, and I would've simply enjoyed being out in the beauty of winter.

Why do I ride in the winter? Because it gets me outside, it challenges me more than riding any other season, and it makes me grateful for what I was able to accomplish during the other 3 seasons. Winter riding and snow riding make me appreciate what my body can do, it reminds me that you can't go into a ride with high expectations- because you never know what you're going to get. Especially with snow conditions.

I enjoy feeling strong, I thrive on discovering that I can ride up a snow-covered hill, and I love that it makes me feel like I can accomplish anything. It makes me feel alive. 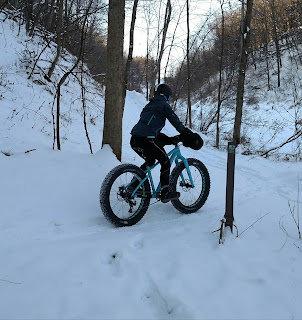 Fatbiking reminds me that I take things too seriously and I compare myself way too much to the riders around me. I need to be me and ride my way- not try to be the next Travis, Jeff, or whomever I idolize for their remarkable riding ability and skill. If I spend all my time trying to ride like Travis, I won't be able to enjoy or appreciate what I am able to do or have yet to do.

When you feel frustrated about your riding ability, take to heart that we all feel that way at some point. Eventually, those feelings may dwindle and become infrequent. I feel if one has a perfectionistic tendency, it may be harder to let those feelings go by the wayside- but know that if you allow yourself to live in the moment...YOUR moment...you will have a much more fulfilling riding experience.
Labels: bikelife fatbiking fearless women of dirt growth personal snow women bike