Keeping the Stoke While Battling Burnout. 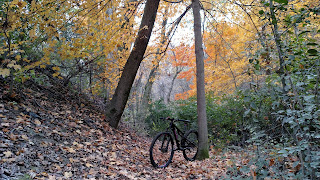 After trying to write this post a handful of times yesterday, a conversation with a friend helped me come to terms with accepting that I need to "live in the moment."


I'll admit, I'm not a person who lives well in the present, I'm always thinking back on past events or looking towards future things and finding my life encased in an envelope of ever-increasing stress.

Coming to terms with this isn't making the writing of this any easier, but it will hopefully be a source of comfort for other folks who may have felt the same way at some point in time.

Part of my funk lately is the fact that progressing with riding has now become more difficult. My friend said "your first year of riding you had a 10% growth. Now you're down to 5%" which honestly, is probably more realistic in terms of how one usually grows with mountain biking. I was fortunate enough to be able to devote copious amounts of time and energy due to my non-traditional work schedule. This allowed me to attain the most basic skills to be a semi-successful rider in a short period of time. After that, it's fine-tuning those skills so you become a better rider on multiple levels:
being able to carry speed thru corners, ride faster with more confidence, ride technical sections successfully, and be better at handling skills in general (like wheel lifts, etc.)

I was feeling anxious over attending my first Co-Ed ride in weeks after hosting regular women's rides. For some reason, I had reverted back to old thoughts of "holding the guys back" and worried about "being slow." My pride plummeted when I spun out on climb in front a rider and let him pass me; I felt sour over my apparent "lack of ability." I spent the rest of the ride trying to keep up and feeling pathetically sorry for myself. Add in that it was my first truly cold ride of the season, I didn't think I needed to use my inhaler prior to heading out. I was so wrong.

Travis knew I was in a funk, but I did the wrong thing when it comes to group ride participation- I sucked it up, didn't request a slower pace, and pushed myself grudgingly thru the entire ride. I cursed my lack of speed and damned myself for not being strong enough to just "deal with it."
That night I admitted to Travis that I was stuck in a pity party and that I knew I was the only one feeling negative about the ride. They weren't standing around talking about how slow or poor of a rider I was. Not at all! They were happy to be outside riding bikes and I should've spoken up. An act that would've been been appreciated more than my radio silence.

Several days later Travis and I went on a ride again. I was in the throes of my monthly cycle and it took probably half the ride to really get myself warmed up and "going." The second half I was feeling stronger, but screwing up on little things that made me want to throw my bike. "Why do I even think I'm a decent rider?" Again, the negative self-talk and thoughts started trickling in and skewing my way of thinking.

I finally opened up to Travis on my feelings and while doing so, spun out on a root. I had to throw my leg out to prevent myself from falling sideways...great. I made my way to where he was standing and he told me it was time for a trail side hug. Trail side pep talks are a rarity, but that night Travis felt it was necessary.

"There is a similarity of how you're feeling now, with your own struggles relative to your current reasons, compared to the struggles that of a newbie rider who has his/her own struggles for their reasons. They both affect confidence and the overall fun had through the riding experience.

You can't let these situations take over your emotions and take away from why you're out there in the first place. It's almost like going back to the beginning, although you're way past that; it's almost a replay but with a different mentality on the subject. Is refining the ride once you're at a higher level harder than accomplishing the goals of climbing this or that hill, getting through that skinny section, or whatever it is when you're starting out? They're very similar, however, you almost feel worse now that you're good at it- because you're still searching for perfection.

Perfecting is harder than accomplishing the skills needed to be successful on the basic level, so don't be so hard on yourself. Your rate of acquiring skills has been excessively fast, therefor the current goals not coming at such a high rate can seem to be a bit of a let down or a greater frustration." 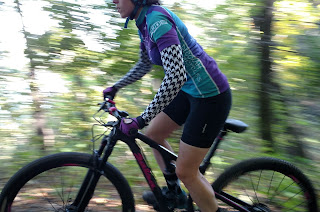 Dealing with the concept of having rapid growth and leveling off into a more natural and steady progression is something I haven't dealt with before. Instead of seeing it for what it is, I got pissed off with myself and my supposed "lack of ability."

I started to feel panicked. I've signed up for a second fatbike race, a 30 k, and the weekend after I have a 20 mile fatbike race with Travis. Then my goals for the summer season...Time Trials, a 30 mile mtb race, Chequamegon 40, and the PertNear 20.

I'm not a racer from the sense I'm on a team nor am I heavily sponsored by large companies. I hardly qualify as "grassroots," and in general I have limited time to train and race. I do well for someone with my time constraints for training, but I started feeling like a sham. I questioned how I won the women's category for the Time Trials and I wondered how 10th in my age group at Chequamegon could be considered doing "very well." I did these events to challenge myself and have fun, but I started to feel like a nobody. I took everything that I accomplished for my season and deemed it unworthy of praise.
This is when I told myself to "cut it out."

Why do I ride? Because I like it. It's fun, it's freeing, and it makes me feel strong and confident. The challenge.
Why do I race? To see how I can push myself. To ride somewhere different than Decorah. To try something new. To meet new people. Buy different beer (ha!) and show women that even if they aren't racing to podium, they can still go and be proud of what they accomplished. Finishing is an accomplishment!

The other side of the burnout coin involves my work with growing women's participation in mountain biking. I didn't take the words I wrote about being "Your Own Advocate" seriously enough to believe them. I started to feel pressured with my lack of accomplishment in my area; I've barely given FWD a chance to grow. I had become impatient, frustrated, and wondered why I was putting forth such an effort. "No one cares." My mind said that without being a "someone" in the industry/advocacy world already, looking for sponsorship as a women's advocate in mountain biking would be nearly impossible.
I took my so-called lack of local success and used that to negate everything I had done over the years as a voice for women and mountain biking.
I took an "I'm sorry, but you're not" from earlier this year and started telling myself "You'll never be" and let me tell you- there is nothing more crushing than taking your passion and slapping yourself in the face with it. It was time for an attitude check.

Burnout is when I become overwhelmed with what I'm passionate about and ultimately run away from it. I started to procrastinate. I found myself withdrawing from riding, withdrawing from writing, and withdrawing from believing in what I feel is something I'm meant to do. I hid from myself. What lit up my soul's fire ended up making me disconnect emotionally and mentally because I decided for whatever reason- I couldn't handle my own success or the success yet to come.

I realize that getting more women to be active with off-road riding in Decorah is a challenge, but it's one that I set out to accept and change. It may be slow going, but I committed myself to this for no matter how long it will potentially take me. I know it may be years and I might only see a handful of women stand up and overcome their fears and anxiety of our trails and gravels- but that is more than if I didn't try at all.

FWD- Fearless Women of Dirt is going to expand next year with the help of some wonderful women who will be ambassadors for FWD, who believe in helping more women find their #bikelife on dirt- be it mountain biking or gravel. I had to accept that FWD is something I can't do solo- it's something that is meant to be shared. FWD is a mindset and it's something I need to actively do myself- Move Forward. I feel grateful and excited that other women feel the same way! 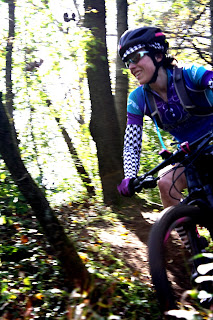 I have been humbled by the support of other women, some in the same boat as myself with smaller groups and others who have support of larger entities helping them with their goals. I have to remember and take to heart- there is a place for all of us.

I'm always grateful for the companies that choose to support a person such as myself. Thank you for believing in me and letting me have a chance to represent you, your philosophies, and your products along with supporting a women's mountain biking/biking advocate. You rock!

Burnout happens, sometimes it sneaks up on you and other times it just completely blankets you. Either way, how you choose to move past it is what will bring you peace of mind. If you love something enough, you will find a way to get out of the muck that is negative self-talk and avoidance. Remember why you are passionate about whatever it is that fuels your soul and be thankful for the opportunity to reflect.