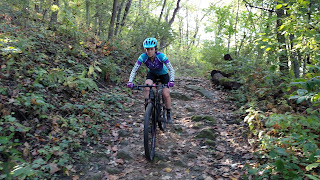 Right around the time we made plans to explore the HPT trails in La Crosse, WI we were told that we should go to Winona, MN and see what they had to offer. So, back-to-back riding Tuesdays ensued!

The trip to Winona, MN from Decorah was an easy one.

The drive was simple and not complicated- which gives extra points for the destination. We got an address for a trail head/parking spot and getting there was relatively easy. On a Tuesday there was ample parking and the port-a-potty was well-stocked and mostly empty. (Yay!)

There was a large kiosk with a trail map at the trail head, but you also found smaller kiosks around which we thought were great and super helpful. I still haven't quite mastered the MTB Project app, but I had downloaded map on my phone and Travis has good navigational skills where I am lacking.

We found that the trails were very similar to ours and less rocky in areas than La Crosse. We really enjoyed the Wildwood section of trails, tho for me I had anxiety over some of the bridges we had to cross. That's a personal thing on my account and it's a work in progress- but the bridges were well made and wide.

The overlooks were beautiful, however the first one we came to apparently was a nesting ground for Asian Beetles. As soon as we stopped so I could try to get a photo, I kept feeling the wee pinches of the beetles biting me. We decided it wasn't worth the effort and continued on. We found other overlooks that were lovely even tho the fall leaves hadn't really changed yet.

I rode my Salsa Spearfish, Gaston, and was pleased with the choice. Ideally, I should've ridden him in La Crosse, but I wanted to have more time on the Procaliber. The Spearfish was excellent for the terrain, which in some areas was pretty rocky, like on the Quarry trail! There was a good amount of leaf cover, but you could tell where you were going. The only downside of the leaves was the moisture they had- but we have that in Decorah, too, so it's not a huge deal. The bike was able to handle it well given the tire pressure and circumstances. A plus bike would've been a great choice as well for some of the trails. If I get the opportunity to go back before the leaves fall next season I would like to try riding the Procaliber on the trails.

Quarry was a challenging trail, really it was the most challenging one we rode. I enjoyed parts of it, even tho there were areas I either didn't feel confident riding or simply wasn't skilled enough to ride. I wasn't able to make it up a rocky climb, but I looked down at it and thought "Gosh, I want to try and ride this because it scares me." So we set up camp for me to ride down it...and my front tire hit a rock, completely stopping me. What ensued was nothing short of a comedy film and I yelled to Travis that I was okay but "Don't look!" and "Don't come up here!"

So I gave it another go, successfully making it, and opted to ride down it a couple more times for good measure. In Decorah we don't have a rocky downhill quite like that where I can work on skills that would make me more confident on similar trails elsewhere. So I took advantage and tried to desensitize myself as much as I could in a short period of time. I did feel nauseous a couple times, but my last run down the rock-laden hill was the smoothest and I felt damn proud. Okay! Time to move on!

There was another steeper hill we eventually came to which had a weird root poking out from under the leaves. Travis said for me to make sure to lean back, which had me instinctively stop to look and assess what was coming up. I'm a cautious rider and I like to know what's up- so I walked back to a spot to give me a better go towards the downhill...and I hit the root wrong. So I had to go back and do it again. 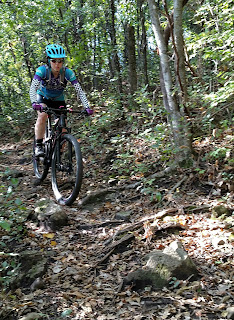 We had a fun downhill back to the rollers and rode a double-wide, smooth trail down and back to our parking area. That was super awesome!

If you enjoy Decorah, you will most definitely like what Winona has to offer for trails. They may not have oodles of mileage for them, but what they have are well-built and I feel, well marked. You do have a bit of climbing to get to the top, but as in Decorah- the climbs are well worth the effort. The views are beauteous and you'll have a mix of intermediate and advanced riding which is sure to please.

The second best part of the day? A random trip to the Starbucks in Target which had the option of using almond milk in specialty coffee drinks. If you're happy to have something besides beer for your post-ride beverage, I highly recommend the salted caramel mocha frappuccino!
Labels: bike life Holzinger Minnesota mountain biking Winona women bike