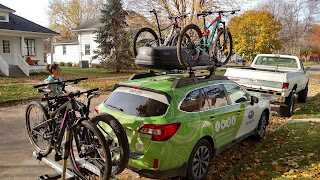 What do you do when Michelle Barker contacts you and says that she is planning to go to Duluth with a couple other women and she'd like you to join? Well, if you can get the most significant of significant others to take the kitty kids to the vet for you go on a road trip!

It's good for me to take these opportunities as they come, because it's helpful for me to get out of my social "shell." Also, it's great to see what other communities are doing to encourage more women to get on bikes.

The purpose of our trip to Duluth would be to join their weekly Tuesday women's mountain bike ride. This ride brings in double the amount that show up for my FWD-Fearless Women of Dirt rides on a regular basis. My hope was to have fun riding with a diverse group, see how they have their rides set up, and hopefully learn what I could do to possibly attract more women to join the Decorah rides.

Michelle and Co. showed up to our doorstep on Tuesday. Travis helped me get my bike situated and I was extremely proud over how well I packed my bag. I hoped that I would have enough clothes to choose from when it came to figuring out what to wear for the evening ride, because I'm always precariously on the fence between over-prepared by a landslide and under.

The drive to Duluth was scenic. I made conversation with Lillian- it was great to chat with and hear about her involvement with her local bike shop. Also being a solo female, hearing her goals and hopes that she would to see accomplished.

Quick stop to Trader Joe's to get something to eat, I had decided to make a questionable choice of sushi. Let me tell you, it was alright. The wasabi sauce was out-of-this-world nasal passage opening. Frankly, I needed that sauce a couple days after the trip due to a head cold cropping up...dang. 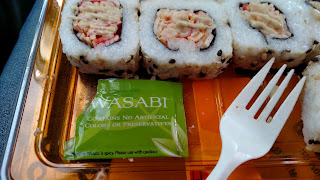 Anyways, back to the trip.
Eventually after some hours later, we came to a rest stop that we would use to change.
The sun was still out and the air was pleasant, so I figured capri tights and a thermal jersey would be fine. Michelle then took us on a bit of a tour of some of the Duluth Traverse. Our ride would start at 5:30 p.m. so we had some time to kill before heading to the school. The Duluth area is beautiful, the lake looks more like an ocean, and the amount of trails they are making happen in their area is amazing.

The ride for this evening would be on the Enger section of the Duluth Traverse. What I was told of this trail would be that it would have berms and be flowy and not "Decorah climbing".
Prior to the ride, I chatted with Dee about women's rides and what had helped her get such a great group going. I was feeling giddy seeing all the women showing up- this was going to be so cool!

Speaking of cool, my body said "Hey! You're cold!" So I nixed the thermal, put on a light jersey over my base layer, and wore a soft shell. I will admit now, I should've stuck with my original plan because I totally got too warm.

Dee was going to lead the "fast" ride and I said I'd come along....and I planted myself right behind her. I was nervous because I still don't know how to gauge my riding and the worry of if I'd keep up was on my mind. I didn't want to hamper the women behind me- those who were used to the trails. 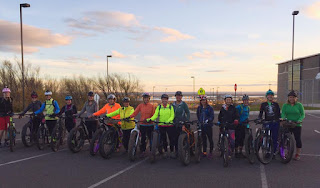 The trails were immensely fun, there were a lot of berms- the climbing was going up the berms vs. a lot of steep and straight climbing that I'm used to. We have some switchback areas in town, so I felt like I knew what I was doing. Now, when it came to going fast, I was excited! We do not have much for simple flow trails. Talking with a local, eventually you can find flow in our trails- but it takes time to figure out how to link them up, etc. Here in Duluth, holy cow! I didn't know how to handle it!

Following behind Dee was a great decision on my part. Being local and an experienced rider- she knew good lines and how to carry speed. I was able to put my focus on following her (not lagging behind) so there were many things I did that I would not have done if I had gone slower or ridden solo on the trail by myself. As a lone rider 99% of the time as well as being a cautious rider on new trails (especially in the dark) putting myself squarely outside my comfort zone from the start was the best decision I made. (Like going over some rocks I know I would have avoided otherwise!)

As the sunlight faded, the lights came on- it was so awesome to see so many women out at night! These were women who had such a great time on the Tuesday rides that they wanted to continue into the "headlight" season. Trying lights out and thus, going to their local bike shop(s) and purchasing lights so they could join the ride. 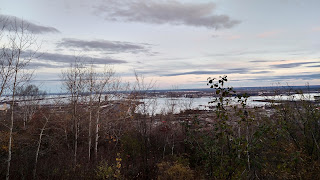 Being involved with their Tuesday group was an important thing for them- of course I dream of that concept happening locally in Decorah and am more inspired to do what I can to make it happen.

There was one point when we were riding back I almost ate it. I should have reduced my tire pressure a little prior to the ride, but I decided to roll with what I had. Coming around a corner too hot, I could feel my bike wanting to slip out from under me. Foot out to counter-balance in a "Gary Fisher Klunker Style" I saved my rig and from myself from causing a multi-woman pile up. RAD!

I shouldn't have worried about if I could keep up well or not. At one point during the ride back, Dee and I stopped so folks could cross the street and meet up with us- however, we saw no one behind us! I felt invigorated! I question my abilities too much, and moments later the rest of our crew showed up.

I loved that I was able to join this ride and the women who were there made me feel welcome even tho I wouldn't be able to be a regular at this event. It was awesome to hear all of the women be so encouraging to one another. I felt very comfortable with the women who were there that evening- it's a really great setup that they have so everyone of all ride levels can feel included. Check them out on Facebook and hopefully you can join them for a ride, soon! 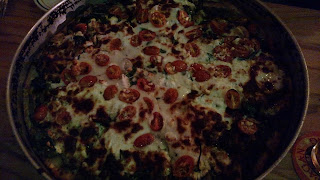 For supper, Michelle suggested we go to the Thirsty Pagan, which is known for some good local brew and delicious pizza- my two favorite food groups!

Now I have a secret. Even tho I am of German descent I dislike sauerkraut, so I will admit I was nervous when Michelle said she ordered a Ruben Roll for us as an appetizer. Oh boy...
It...was...amazing!!!!! I have never had something that delicious before that had an ample amount of sauerkraut with it- and I wasn't bothered by the kraut at all. I now know one place where I can have a Ruben and actually like it.

The pizza was fantastic- our eyes were bigger than our stomachs, tho. One slice ended up being enough to fill us up. It had a generous amount of pesto, tomato, and cheese- way to get out of my usual "pizza zone" and try something different and most definitely good!

After our meal, we then had a drive to Wisconsin Dells as Michelle was giving presentations in the morning at the hotel we would be staying at. I managed to stay awake for awhile, but eventually my eyes drifted shut and I was out. I'm notoriously good for falling asleep in a vehicle as a passenger, it's one of my "flaws" as a human being. I would try to reawaken for long moments, because I wanted to ensure I would fall asleep at the hotel.

When we arrived at the hotel, I was thrilled with the idea of getting my contacts out as well as lying in a bed. My neck was feeling a bit disappointed in my sleeping positions in the car, thus, a pillow would be a welcome treat. We all went to bed and I was happy to fall asleep pretty quickly given the fact I'm not a great hotel sleeper.

I allowed myself to wake up naturally, so after 8:30 a.m. I was ready to be up and out of bed. My shower felt great and I wondered how fluffy my hair would get. Coffee was acquired and we waited for Michelle's presentations to be over before heading on the road. The nice thing about leaving the Dells was that going home took a lot less time than getting out of town! One amusement was driving by a farm that had old (little) satellites attached to fence posts that were painted with "CIA, FBI, IRS, etc." Oh boy.

I was happy when we pulled into my yard to unload my bike and stuff. It was good to be home and the weather was great. The shop had remained (unfortunately) slow, so I had made the decision to go for a bike ride. After being in the car for multiple hours I was ready to exert myself on the trails! 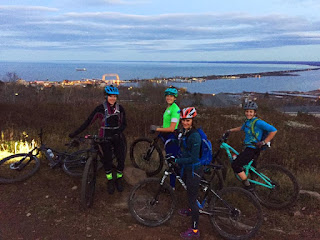 I can't say enough words of appreciation for the experience that Michelle included me on. I am continually inspired by folks and what they do to increase the women's ridership- it was so wonderful to see so many women on bikes!

It was fabulous to see such a thriving and active women's off-road group; to be a part of their ride was a treat! I am so grateful for the opportunity to meet new people and ride in a new area. Travis and I will most definitely have to make a future trip to Duluth so I can explore even more trails up there!
Labels: bike life fatbiking fearless women of dirt FWD inspire involved mountain biking women bike