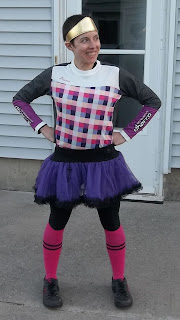 Many apologies for the late publication of this- it was too fun of an event for me to let it sit unpublished until the end of time! This event happened in October, on my birthday, and was also my first 1st place finish to date.

The Decorah Night Shift race has been around for 9 (maybe more?) years and is the last mountain bike event of the season for Decorah. Last year the Night Shift was scheduled in November- this year the consensus was to have the event earlier in hopes a few more people would attend. Irony would dictate that the race would be held on my birthday, October 3rd- because I was lucky enough to have my birthday fall on a Saturday.

The Night Shift is a nighttime mountain bike race, which adds additional challenge to the ride if one isn't "seasoned" with riding singletrack at night. Last year I was encouraged to participate but ultimately didn't due to having only gone on 3 rides at night. At that particular moment, it was still too new to me and I worried about my handling skills too much.

This season, I felt like I did great on my first night ride. I felt confident and wasn't so easily spooked by invisible cougars and bears- and in true Josie fashion- I wanted to attend all of our riding events this year.

Let me state plainly- I do not "train" for events. The most I do is maybe shift up a few gears to give more resistance and ride more consistently without breaks. I don't feel disciplined enough to try and legitimately train for something. Originally I was working on riding up Old Randy's on a weekly basis and that subsided for some reason or another. I guess I figured working on my cornering skills in the pines would be more worth my time than working on climbing a large hill slowly.

I do not have the best mentality when it comes to events. I get really anxious, more or less I psych myself up over performing and thus, put a lot of pressure on myself. It's a mixed bag- I seriously choose to participate to increase female rider numbers, but I also want to push myself and do the best I can. I also deal with nerves terribly. The more nervous I am, the less I want to eat- so when I managed to eat my 3 slices of pre-ride pizza I felt pretty darn proud of myself.

Getting ready for the race was also a challenge. Dissecting the heck out of the weather and wondering what would be too much or "just right" because I am not going to stop and take layers off. There isn't time for that. Of course, the main staple of my ride outfit would be my tutu (Tough Girl Tutus- check 'em out!) because if you are racing on your birthday, why not dress up?

We dressed and headed over to register. There was enough time to register and leave if we wanted, but I felt like that would be silly. Let's just stay in the warm building, see who shows up, and then I won't feel worried over coming back "on time."

I knew for sure that one other female would be riding and happily, Steph joined in last minute. 3 women would be riding vs. just 2 and I was stoked! My hope is that slowly and surely I can somehow inspire other women to participate in our local events. Start changing the 1-2 entries into more- because that would be just awesome. Take away the worry of "oh, what if I'm last?" and simply do it to do it, not care about placement. It's a fun environment if you go into it with a positive mindset- don't let the mental pressure stifle your experience. I find that my anxiousness melts away once I'm on my bike and pedaling.

We eventually were led to the starting line which had us on the road near the start of the trail called IPT and from there you had to ride up Quarry Hill to the Van Peenen park entrance. With a break the climb was not so grueling and I'll admit, I shifted so I could spin and spin I did. With exercise induced asthma my objective is to not blow myself up on areas I don't need to. Soon enough we were on the fire road to the pines and my confidence grew. The route for Van Peenen is something I ride a LOT and I was ready to take the pines head on. I was behind a fellow who was going a nice clip to where it would've been pointless to pass. 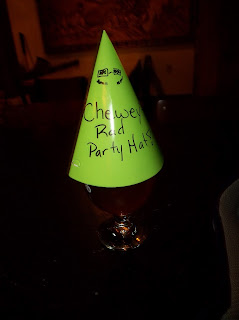 Once we were out of the pines I made my pass and went onto Little Big Horn. This is where my scrambling fumbled me up a bit. I can, apparently, ride fast- but when you are scrambling you can be a little sloppy. I was a little sloppy going over a log I go over hundreds of times, nothing detrimental, just not very graceful.

After Little Big Horn it was onward to Fred. Fred is one of my favorite trails and I've completely humanized it. The past few rides I didn't fully turn my suspension on so I could get the full effect of the steps that take you to the downhill. "Keep your arms relaxed..." "Be smooth." "Sit back, be steady." Riding down the last part of Fred makes me think of a washboard and there are some loose rocks that sometimes fly up at you or the bike. I take my time and try to ride smart while riding fast...not the easiest thing to do.


Making my way up Old Randy was somewhat successful.
I rode up most of it, tho had to stop and walk a short ways in the middle area. We passed Benji again as he gave encouragement; at the top my pedaling was slow to go simply so I could catch my breath. Travis was giving me kudos as well and all I could spit out was "I can't talk right now..."

There was one spot I knew I would walk and that was the corner at the bottom of Wold's. It just wasn't something I felt I needed to do to prove anything, and the last thing I wanted to do was DNF because I biffed it badly. On Lower Mother's Day I passed the fellow we had been riding behind most of the ride. There were points while on Lower Mother's Day I that I felt like I was going to throw up or simply questioned if I could keep going at the pace I was at. We rode up the new section of Boa and I almost psyched myself out- it felt at first the climb was going to be much steeper than it was- you bet I was thankful to find that it was pretty darn short!

At the top it was a "hammerfest" to Captian's and from there- Upper Randy's. After Randy's it was Backside to Rattlesnake Cave. Rattlesnake is a trail I don't go on much at all other than for events. It has a steep climb that takes a lot out of you for a short moment, then you come down and climb up a really loose and rocky section. After the climb you have a rooty downhill that shoots you down to the road and then a left turn takes you to River Trail. The downhill turn on River tripped me up last week, so I was hoping for a smooth downhill, which I accomplished.

River turned again into a "hammerfest"- I was happy to make the uphill climb successfully and then proceeded to lead Travis and Benji along the turns to the finish. Travis and Benji added some color to the night with hoots and hollers, keeping it lighthearted and fun. I pedaled as hard as I could to the finish line- I was stoked! My anxieties had all dissipated during the ride and I felt great. Maybe not super awesome in my lungs, but it was totally worth the experience.

Travis and I waited to see Carrie and Steph finish, he also was put to use by changing a tube for a fellow rider. After that we headed to the shop to grab the truck (because who am I kidding, I was going to celebrate and I had no plans of riding my bike after beers.) 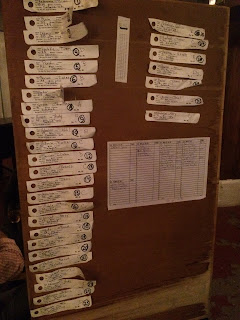 The awards ceremony was at the Courtyard & Cellar and we gathered 'round and made merry! I can't promise things didn't get a wee bit silly, but who cares? It was my birthday and I was going to have fun!

I finished the course in 0:51:01.66
The best part? I was riding flats....and in a flouncy tutu. RAD!
Carrie came in 2nd and Steph was 3rd. Steph's biggest worry didn't happen and Carrie finished, so I would say all-in-all everyone had a great ride and I had one of the best birthdays ever! (How could you not? Especially when Sov serenades you "Happy Birthday"?)
Labels: mountain biking personal race day women bike