Putting Riders On a Pedestal 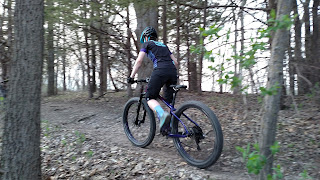 Over the past few years I have learned one very important thing about the women I’ve interviewed-they are human.

When I started out with contacting women to interview for my blog, I set my sights on locals and then progressed to women from all over. I reached out to anyone who seemed to love life on two wheels, in any shape or form.

Eventually, I became brave enough to contact riders who I felt were on the more “famous” side of the spectrum. Names heard all over on the internet or sometimes bike magazines- coaches, racers, and industry folk who truly set the bar high for inspiration.

Women who I would be afraid to ride with, given the opportunity…because I did not and still do not always see myself as being “good” at riding.

Let’s take a step back.

I just admitted that I would be afraid to ride with other women…other women that I deem “better” than myself. Why? Because I put them on a pedestal- and on one so high that I could probably never reach.

Why am I creating a setback?
Insecurities.

At Frozen 40/20 when I met April Morgan at registration and then later met Martha Flynn post-race. I was so incredibly awe-struck over how wonderful and genuine those women were. It was one of the first times I actually met and had conversations with the women I had interviewed. I was nervous about how I looked and sounded. I didn’t see myself as a “great” rider like I had projected on to them- I got to smile and converse with mountain biking idols that day. Women that I would love to aspire to be like- an advocate for cycling and a damn strong rider.


But.....
I am an advocate for cycling/mountain biking and have grown into a stronger rider than I was in ’14. Why did I shortchange myself?


Why do we place people we admire and respect so high on a pedestal that we become intimidated by the mere thought of interaction?

When I started riding with Travis, it was extremely difficult for me to not put him high on a pedestal. This made the first few rides of the season extra challenging because I was ridiculously hard on myself. I wasn’t able to filter his comments/feedback and took everything as a negative criticism. I continually questioned why I was out there trying.

Even tho he was more experienced and could ride forever (so it seemed) he made sure that we took time to session spots that were tricky and I had as many breaks as I needed. He was happy to show me how to do something multiple times if requested. He was far beyond my skill level but took the time and energy to show me he was there to help, support, and guide me.

The more I rode with Travis and with others, the more I saw that we ALL make mistakes- there is no such thing as perfection when it comes to mountain biking. I threw my “I could never _________, so why try?” mentality out the door.

Now, as a slightly more experienced rider going into her 3rd season, I have started to wonder how high on the pedestal I am to others- and how to help break away the insecurities that way of thinking can encourage.

I know that I have improved with my riding, but I am no "professional athlete." I'm just a woman who loves mountain biking.

I might not have to take breaks like I used to, but that doesn’t mean I don’t enjoy time off the bike during a ride. I love taking photos, and sometimes my ride is filled with many stops to try and get a snapshot of a pretty flower or two. Maybe my bike, if I’m feeling particularly proud of her that day.

I’m at an awkward “youngish adult” age. Early 30’s seems to be some sort of grey area where you are a now mystical unicorn - it's difficult to attract other women to ride with you. You’re either “too young” or “too old.” It doesn’t help that I am also told that I look younger than my age.

I’m experienced enough to be intimidating yet not experienced enough to be believable or relatable. Add casually* attending events to the mix doesn’t help, either, but I enjoy going to them because I can find other women who are open for conversation and similar in age. Events are FUN!
(*I say casual because I do not have time to legitimately train and I'm not interested in competing on a regular basis.) 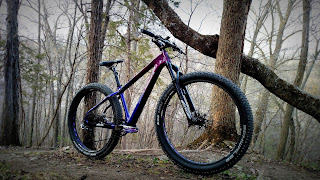 Placing another person you admire/respect on a pedestal can be a detriment, especially if what you are doing is comparing yourself and feeling poorly about your skills. Looking down on yourself is not working towards accomplishing short-term goals that fit within your long-term goals.

There will always be someone better, stronger, and faster- and sometimes those are the people that want to help you succeed!

They go out of their way to invite you on rides and show support/encouragement; don't push those individuals so far back that you can’t see them. You'll probably be surprised with how well they can relate to what you are feeling or struggling with- they were there once, too. They still might be. We are our own worst critics- don't allow the insecurities you have keep you from enjoying the company of other rad riders!
Labels: growth mountain biking personal women bike