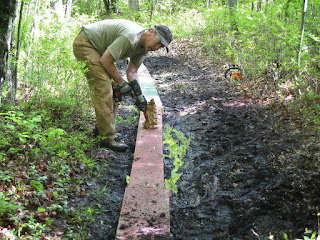 I started working on the Levis Mound trails in about 1987-when a friend and I bought our first mtn bikes (Rock Hoppers back then!). Levis had just a few old ski trails so we started making singletrack to avoid the wet sections-so basically by-passes.

We realized the terrain was so unique, so I started laying out trails over and on top of the various mounds there. Over the years-we learned a lot about trail design and what works and doesn't. Until this summer, all trails were built by hand.


I had been a XC ski racer and did the expert class in Mtn Bike racing for about 18 years-also tossed in some road races and biathlons. For income (for the trail) we started the Buzzard Buster WORS race and I took on duties as race director each yr. After 15 years and no one sueing us, I stepped down (and the race ended) We've now brought the Buzzard Buster back as a WEMS race (much more low key) and it has been a fun event. We also started the Sweaty Yeti 3 or 4 years ago as a winter fatbike race-that has been loads of fun! We started machine grooming trails for winter riding 4 years ago and finally I ended up designing a roller to pack singletrack (we used everything else, and nothing did a really good job). A local fabricator made one, then as of last year, 40 more, which have been shipped everywhere! The winter riding scene has been great-10 miles of packed singletrack and expanding 2 more miles this winter.

I also do the XC ski trail grooming in the winter and along with a couple other people do all the trail building and maintenance.

I also do some outdoor writing ( Fat-Bike.com, Wis Bike Fed, Wis Outdoor Fun web site, Cross Country Skiier Magazine, Gannet Media). Along with that, I also am a photographer.

I enjoy all outdoor sports-hunting, fishing sea kayaking, backpacking and of course working with wildlife-especially wolves and now elk (we just released a new herd just south of Levis in Jackson Co.)

When did you first start riding a bike?
Rode as a kid, but then really didn't start again until I bought a Specialized Rockhopper in about 1987-a friend and I were so stoked about these new fangled "mountain bikes" and were dying to start riding on trails and dirt.

What motivated you to ride as much as you have over the years?
Probably because I'd rather be outdoors than anyplace else and the bike helps me see more of it all. Building trails also became a motivator-it worked hand in hand-build trails=wanting to ride them ( or more). Ride more= wanting more trails.

You work at Levis Mounds, for those unfamiliar with the Wisconsin area, tell us about the trails and what makes them unique?
Levis (Lev-IS) is located at the top edge of the driftless area. A geologist would call these mounds "stacks" for their precipitous sides have been carved by wave and current action in Glacial Lake Wisconsin, where they stood as isolated islands during one or more ice advances of Woodfordian age into central Wisconsin. They are striking features because they rise so abruptly from such a flat surface to the north and east and because their yellowish sandstone contrasts with the green vegetation that surrounds and partly covers them.

The Levis Landscape, in Southern Clark County has features totally unlike those anywhere else in the United States east of the Mississippi River. The hills of this region are buttes and mesas. They have the straight lines, steep cliffs, and sharp angles of an arid country rather than the soft curves of a humid region. The features to be seen are isolated, rocky hills, which resemble ruined castles and crags of sandstone along a line of bold, irregular bluffs, which soon run into unglaciated coulees to the southwest toward LaCrosse, Wisconsin.The banding in this sandstone of dark red iron oxide contrasts markedly with white to yellow quartz and is locally called "zebra rock."

It's a unique area and we always try to feature in when designing trails-I don't know of any other trails system quite like it.

What originally inspired you to start working at Levis Mounds?
The purchase of that first Rockhopper. The trail then was just a crude XC ski trail with wet spots and a rather tame route. Levis had maybe 8 miles of ski trail then, usually not well maintained. We wanted something better to ride-at first, "singletrack" was created to by-pass mud holes, then those section started to become connected to create a totally seperate singletrack trail system. We then wanted to take advantage to the terrain and started building up and over the mounds exploring other parts of the forest here.

What has been one of the most interesting things you've learned since you started building trails?
That we made a lot of mistakes in the early years. Cribbing the sides of trails didn't work (all log cribbing is now gone, replaced by better benching). Understanding water flow and knowing if you can actually build a trail in a certain location-if it'll hold up in the long term.

For those who have enjoyed riding the trails at Levis- how can they help?
We publish work days on our FB page and welcome anyone who can lend muscle. 99% of our trails have been hand built. Also, we always are looking for help at our events (currently, the Sweaty Yeti fatbike race in Feb., and the Buzzard Buster WEMS race in the summer). We have a really small club, so additional help is appreciated. Those are our only funding mechanisms. 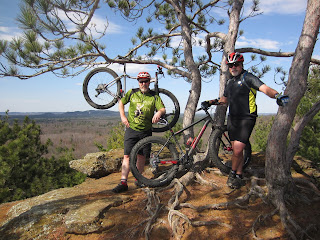 Devil's Advocate question- if you had to pick 5 trails for a Levis newcomer to ride, what would you suggest?
For an appropriately skilled rider: My top 5 are in order- 1) Sidewinder. I trail I laid out in the winter on snowshoes, not a long trail, and our only one way trail. It's serpentine, with three levels of trail stacked on top of each other. "Visually intimidating" one friend calls it. Beautiful views.

2) Cliffhanger. The longest downhill we have and one that has facets of Colorado to it-riding in pine, a lot of rock and fast. Super fun.

3) Toad Road featuring Plumbers Crack. Another fun downhill, which we are starting to leave less "manicured." It calls for your attention. Plumbers Crack is a name someone came up with for a section that drops off the top of the mound into a split rock, barely wide enough for handlebars. It's a location I'd looked at for many years thinking it would be so cool to ride down and through that fissure....so the pin flags came out and we did it. It did require a lot of wood ramp engineering, but so worth it.

4) Goat Dance. A trail we wanted to build for a long time-it reaches north west from the main trail system and takes advantage of two more sandstone mounds-the highest ones in the area. It's a 3 mile loop and as of Oct. 16th 2015, also includes a downhill only section, which will be included in our 14 miles winter loop. It has tough long climbs and fast descents.

5) The Hermosas (Upper Hermosa, Hermosa, Lower Hermosa). The three trails combine to make a return route from Trow Mound, which is the NW mound in the trail. Each section gradually lowers in elevation-good climbs, some switchbacks and then a flowy final section we call "Beer Run" that empties riders out onto Dead Turkey or Lower Glen. 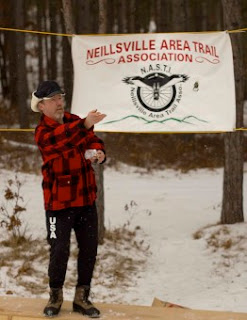 Tell us about the (current) Buzzard Buster and the Sweaty Yeti and why people should consider visiting for said events:
The "old" Buzzard Buster was a founding WORS race with 78 people the first year-it kept doubling until it peaked at 900+. At that point, it just wasn't fun to put on. WORS ran it in name one last year on their own and then it was dropped. Fast forward to 4 years ago and the advent of fatbiking/snowbiking and machine groomed trails which we had incorporated at Levis. A small race for fun loving people was initiated based on the enduro concept pioneered by Gomez. The race has evolved some-in the early days, few people had fatbikes so riders would share and we actually had a team "draft". Now most riders have one and solo riders make up a larger percent. We still try and keep the team concept because it's just plain fun.


We do really want to keep it a small town, low key, have a great time in the snow sort of race.
No dog-eat-dog race head attitudes please.
Lots of prizes, beer sponsorship and even winter camping.

The New Buzzard Buster is now a WEMS race (Wis Endurance Mtn Bike Series) which features 3-12 hr races and generally have smaller, and again, more low key fields. Because it had been run here under a different name and by out of town race directors, we asked if the club could take it over and re-brand it. It's gone well and now will move to an earlier start date because Levis is almost always the first trail open in the state. (sandy soils dry quickly). The WEMS series is friendly and we try to keep it similar in nature to the Sweaty Yeti. On the books is a possible Summer version of the Sweaty, a fatbike only race-stay tuned.

How have you seen fatbiking grow over the years since having groomed singletrack in the winter months?
Exploded. In just 4 years, our machine groomed trail has seen a ton of winter visitors. It's pretty common to see the parking lot filled with 1/3 XC skiiers, 1/3 snowshoers and 1/3 fatbikers. Sometimes fatbikes outnumber skiiers. To me, it's a whole different sport than riding in the summer, besides the obvious. It tends to be more social with group and no-drop rides, a lot of stops, pictures and sips of body warming liquid.

Fatbikes! Why should people try them before they knock 'em?-
I thought they looked silly at first. My first ride was kinda slow and strange, but there was something about a bike you could ride anywhere. The newer bikes handle so well in comparison and for the past 3 years, I ride fatbike 80% of the time, all year. They are so good at a lot of things-traction, downhill bombing, climbing and of course snow riding. I've been able to explore frozen rivers and places you can't get to any way else. I just love them and with weights coming down, you don't have that penalty any more. Folks riding them now come back with a smile almost every time.

What do you love about riding your bike?
Being outdoors, exploring being with friends.

Tell us about your bike(s), what they are like and why did you choose them?
Currently I've downsized a lot from my stable of bikes in the past. One of my favorites was a Bridgestone MB-1, which I rode to death. A Sarotta T-Max followed. I jumped in to the full suspension craze on a Trek Y-Bike, then a Klein Mantra-both great for their day. Now I've come full circle-back on fully rigid- a Salsa El Mariachi SS, just to have a singlespeed 29er for quick rides on a local ATV trail or forest road and commuter. My Salsa Beargrease-such an awesome bike, light, responsive and my year round go-to ride. 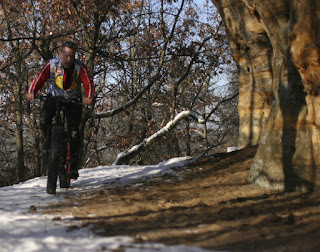 A Muckluk proceeded this, but after testing one, I fell in love. I also have a Carver Gnarvester 29+ Ti for faster ripping. A friend lent me their Krampus and yes-there was something great about 29+ so I set out to find one.
The Carver was reasonable in price and I could build it as I wanted. It has a carbon Carver fork and just rolls along so fast.

Tell us a random fact about yourself-
Retired from 32 years teaching art and photography and currently a Wildlife Technician for the Ho-Chunk Nation DNR. Love the new job!
Labels: interview involved Levis mountain biking