Adventures of the First Lady- Catching Up 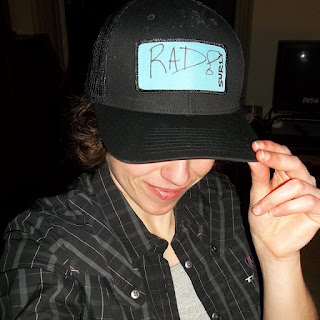 Thursday evening a woman and her daughter came into the shop. I knew them well and by that, I mean I knew them when I worked behind the counter at the food Co-Op. Never did we really have conversation, but I knew they regularly had an after school "date" of sorts for a treat.

Mom with coffee, daughter with a milk (?) and sometimes a cookie to split or Lindt ball truffles. I thought it was sweet to have such consistency with their time together.

After awhile of checking them out regularly, she was one individual who I remembered to always print a receipt for without asking.

(I loved when I could impress people by remembering how to run their card, if they needed a receipt, or could remember their name and/or # and most impressive- if I knew they were coming and saw an item or two I could ring up without a bar code or plu.)

In for a gift for the husband/father who is a well known rider in town. At the counter, she asked me how my women's group was coming along. (The rides, etc.) and I admitted that it's slow going. I knew going into it that it might take awhile for it to pick up, but I was hopeful and it would be around until the end of time. I mentioned that I've had some mention interest, it's just they've been busy with other things and it kept being pushed back/off. However, I'm hopeful interest will perk up next season.

She had went on to mention she'd been up in Palisades and noticed how nice and buff the trails were- how nice they would be to ride. Then went on to mention that I had done well at the Night Shift, she used to race and had looked at the results. She talked about how she could remember so clearly when she used to, and it was a little surprising for her. I said based on how well I did at the Night Shift, I was "retired", and by that I mean I'll still join in our local events (and non-local!) but my focus can really be just upping the female numbers. (Let me be honest with myself- I'm still going to try my best...because I'm really not good at trying to "not try.")

She mentioned maybe next summer she'd give riding a go again. I told her I'd be happy to ride with her if she decided. Her hiatus from the trails was due to work becoming busy and fear of getting hurt. Like my friends (and myself)...we all have jobs that require our arms/hands. For this individual, if she broke even a finger she wouldn't be able to do her work, which would not be positive. I told her that when I first started riding, I was SO fearful of getting hurt. I hate saying I'm not as worried now...I'm more worried about getting hurt to a point where I have to be off the bike vs. not having employment. Working at a bike shop, you could say that I wouldn't get as many eyebrow raises for an arm in a sling vs. working at a grocery store.

The conversation ended and we went our separate ways, me back to a rental bike I was cleaning and she with her daughter back home. I had asked Travis about her mountain biking days- he said she was an excellent rider and placed very well in local events. I was awe struck. I was given another chapter in local mountain biking history- and honestly, I wanted more!

In other news, Casey Sheppard visited Decorah on her nomadic trip, and I was again awe struck! She is such a rad individual, and you can scope out her adventures here: Case of the Nomads

You can check out her blog post about her visit with me in Decorah here: Fire in Their Eyes 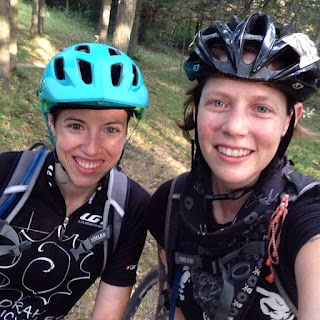 It was a wonderful experience which I feel so fortunate to have experienced. Casey is really an amazing woman and her adventures leave me feeling so inspired! For as introverted as I am, there is a small portion of me that is intrigued about the idea of going to other places.

At first I will admit being nervous over riding with someone who I hadn't ridden with before. I always get butterflies! I was really thankful to know I'm not the only one who isn't an early morning person. Mornings are doable, but I'm certainly not a bushy-tailed ray of happy sunshine! Half a cup of coffee was all I allowed myself to have prior to the ride. I was tired, I don't sleep well when I'm doing something outside the norm aka waking up an hour+ earlier than normal...so I took my waking hours into thinking of a route for us to go on.

We ended the ride with smiles and I realized I was worried for nothing! 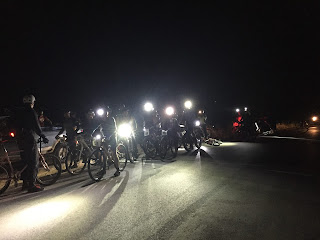 Meeting up later for drinks at the Courtyard & Cellar we talked for much longer than anticipated. It was so refreshing to meet another woman who was so genuine and real. Her experiences were inspiring, her thoughts were refreshing, and I hated for the evening to end. She is a rad woman and I'm happy to have made a new bike-riding friend!


The Night Shift landed on my birthday, so of course I felt a genuine obligation to turn an event into an "easy birthday party"...because when there is an event, usually there is a post-event celebration. Said post event celebration would be at the Courtyard & Cellar and that would mean birthday beers! Not to mention, a sweet serenade from the local Surly fellow- Sov.

It was my first race at night, and originally I entered the concept of racing at night with extreme nervousness. However, my first ride at night this season gave me such a confidence boost, that I knew I would be pretty darn ready. I did a few other night rides in the mean time, and day of I took myself out on an easy afternoon ride to calm my nerves with familiarity.

I did ride hard, I gave it my all...and rode a bit bumbly in some spots due to how fast I was trying to go. I become a little sloppy when I'm concerned over hustling- but it was all good and I came out finishing first! I'd say that was an excellent way to ring in my 31st year. 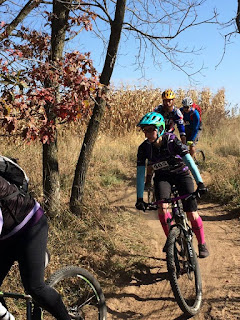 Weeks later, Steph and I explored the trails in Viroqua, WI for the pertNear20 (our numbers got switched somehow so results are flipped- I placed 5th overall for the women's category. Sweet!)
It was our first "official" FWD team event. We do not have jerseys or shirts yet for FWD, so we wore the new Decorah Bicycles shop jersey.

I also took a gulp and registered for another event out of town called Frozen 40, however, I shall be doing the 20 mile race vs. 40 miles. Being I survived my first (mostly off road) 20ish mile event, I figure that it would be a better option than not. I'll be honest, I am not a "trainer" for events and simply go off of sheer willpower and that I ride almost daily. So let's see how a 20 mile race in the snow goes first before I commit to 40.

I'll be honest, I'm nervous as heck! I'm not really a person who travels far from home, etc. So we shall see how it all pans out. I think it's good to get out of a comfort zone sometimes, so that I shall. I've forewarned Travis we'll be driving up to the area sometime in the following months so I can get a feel for the traffic and figure out how to get from point a. to point b.

Otherwise, shop life has been on the slow side. Social media time, TrekU, and prepping the store for winter. (Snowshoes, Skis) Cooler weather has limited the amount of rentals, but we have had takers on bringing in service work. (Yay!) Our turnaround time has been fantastic and will continue to be so until Spring rolls around again. (Take note, if you wait to bring your bike in for service work in March/April, you will likely be waiting weeks to get it back....hinthint.)

Now we wait for the fatbike season to officially start.
We have plenty of fatbikes to choose from: Surly, Salsa, Trek, and Specialized products. Literally there is a fatbike for everyone, and the decision making process can certainly be stressful. Travis is a tremendous resource of knowledge and can help you make the best decision possible. 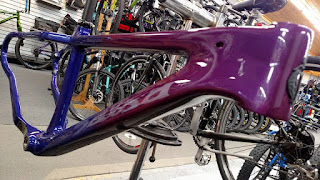 In the works is my future Salsa Beargrease X7, now completely stripped down to the frame, will be built into a 650b+ bike. It'll be a next-season bike for sure, but it was fun to start the process! Holographic rim tape will give it a serious bling factor, and I'm pretty certain I'll name it Jem (Yes, like Jem and the Holograms...but cartoon version...) 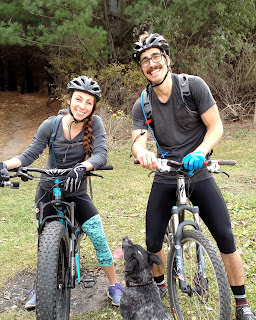 And another reason working at a bike shop rocks? When it's slow enough that you can take some rad
out-of-towners out on a mountain bike ride! This is something that I can potentially do on a spur of the moment Monday thru Friday, but if you have an idea that you will be coming to town- a heads up is preferred. That way you can be shown the trails vs. just reading a map.

This is a fantastic option for women who can't make the Sunday ride. I can easily make scheduled rides happen during the week while we're quiet around the shop.


And while you're at it, head over to FWD on Facebook and join the group!


Just recently Travis and I went out and did some trail raking- which is a really simple way to clear up some of Mother Nature's clutter.

Leaves were still a bit damp, so rakes worked much better than a leaf blower (that we didn't have, anyways.) We cleared off the Luge, Backside, and Captain's trail. Oh the dirt under the cover was glorious, pretty much what you would consider "hero dirt!"

You can read more about the experience here: Giving Back to the Northeast Iowa Trails 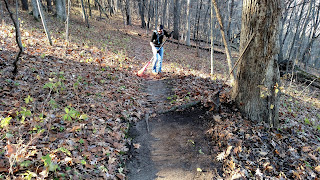 Donating time to make the trails more enjoyable for everyone is so rewarding! Plus, you can enjoy your own handiwork once you're done. Who doesn't love riding smooth and buff dirt? I know I do!