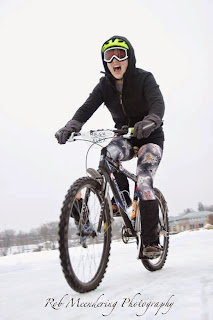 
When did you first start riding a bike and what has motivated you to ride over the years?
I lived in Chicago for a few years and started riding a bike to work because the El was unreliable and the parking downtown was way more expensive than I could afford.

From there I started going to the monthly Critical Mass rides from Daley Plaza--
I liked the party vibe and the shenanigans, cruising down Lake Shore Drive or ramping vintage Schwinns into Lake Michigan. After I moved back to the Mitten, I just really easily fell in with a group of similarly-minded velo-misfits. I feel that the bicycle is sport and fitness, art and creativity, individual as well as communitarian. I can spend as much or as little money and effort as I want on bicycling; the bicycle can be anything I want it to be.

You are a year-round commuter, awesome! What inspired you to stay on your bike during all seasons?
No joke, my fat bike has allowed me to stay sane (and probably stay married, too) through the cold months… the winters here can be long and brutal, and being trapped indoors for that long can do some really weird things to the mind.

Do you have any tips/suggestions for those who are new to commuting?
Please, please, ride in the road. You might think that the sidewalk is safer but you’re way more likely to get hit by a car backing out of a driveway, you’re riding through more driver blind spots, and you’re an absolute menace to small children, pets, and the elderly. It ain’t a “sidebike.”

You are involved with a start-up mountain bike program for kids. What do you feel is important about getting kids involved with biking?
You’ll hear hippie parents talk about “Nature Deficit Disorder,” the idea that little ones aren’t spending enough outside and it’s leading to individual squirrelliness and cultural malaise. I think biking is the best way to counter this, to be outside and to be aware of one’s surroundings and to note the consequences of decisions made in a low-key setting. It’s also important to get children interested in environmental stewardship and healthy living early on, that way it’s habit and not a drastic/difficult change of pace later down the line. But it doesn’t have to be biking. If I was super into geocaching, I’d be trying to get kids into geocaching. If I was super into skateboarding, I’d be trying to get kids into skateboarding… that being said, I am so super stoked about this team!!! It’s gonna be a really good time and I’m so proud to be a part of it.

You also involve your own child with biking (either taking along on commuting rides or mountain biking) what suggestions do you have for introducing the younger generation to two wheels?
I’m not sure Badger was ever “introduced” to bikes, if so he can’t remember, he’s been riding in a modified Burley since he was about three months old. But for everyone else (kiddos as well as adults,) I’d say to keep everything as pressure-free as possible and to let the new rider go at his or her own pace. Bikes are waaaaaay more fun than cars, and that sells itself. 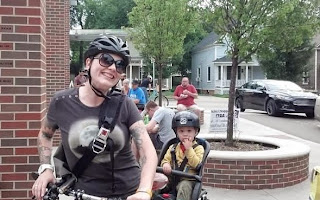 Your heart is with endurance mountain biking. Tell us about your first mountain bike ride-
It was awful! My husband was really trying to be encouraging but he kept giving me what he thought were helpful tips and I’m kind of a curmudgeon and I don’t like being told what to do and I was so frustrated! We were that couple screaming at each other on the side of the trail that everyone hates. Disclaimer, it’s gotten infinitely better and Alex is my favorite favorite favorite person to ride with. But now whenever he’s talking with friends who are trying to get their wives/girlfriends into the sport, he’ll tell his friends to back off and let their riding partner make their own mistakes without a bunch of unwarranted input. Everyone ‘gets it’ eventually. Perhaps the two of us should get into Cautionary Tale Mountain Bike Marriage Counseling, heh.

When you started mountain biking, were you nervous? If so, what helped you overcome?
Every time I’m at a trail, doesn’t matter where the trail is located or how technical the terrain, I always see an old fella, usually wearing a polo shirt and khakis or blue jeans, riding a hybrid bike with bald tires and creaky gears and an ancient pie plate and platform pedals and the bike itself is probably twenty years old, and he’s just happily puttering along, and I think to myself, “if that guy can do it, and have a great time, so can I!” This dude or someone just like him assuredly lives in your town. He is awesome. We don’t owe anybody anything when we’re shredding. 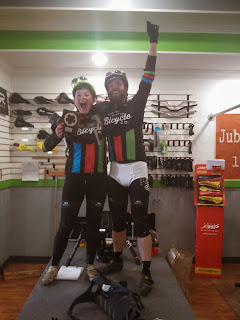 Have you had any biffs that were challenging for you on a physical/mental/emotional level? What did you do to heal and overcome?
Biffs? Not really, although I do injure myself pretty frequently. Last year I broke my wrist, got a bunch of really nasty backside abscesses (TMI?), and a few months ago suffered a severe concussion on the ice about 100 miles north of home. I’m currently dealing with some weird sort of whiplash-like neck soreness from crashing on the trail yesterday. It happens, and it especially happens when I try to challenge myself in new ways. However, I really think the mental butt-kicking of a bad race or not meeting the goals I had set for myself or feeling like I’ve disappointed people I respect, are much harder, and at that point it’s best just to take a step back and focus on something else for a little while. Sometimes I can get really down on myself about things that truly don’t matter. I’ve gotten way more posi about it all this year, maybe it’s that wisdom and clarity I’ve heard about. Not sure.

When you started out riding, what were some handling skills that challenged you? Do you have any suggestions for what helped you grasp them?
I didn’t really get good at standing and hammering on a climb until I started riding single. I didn’t get really good at descending switchbacks until I swapped out my suspension fork for a rigid and it altered the turn radius. I wouldn’t recommend it for everybody, but limiting my ability to rely on the bike’s technological bells and whistles has really improved my performance.

Are there still handling or technical riding aspects that you find tricky?
Wheelies! But I think this is my year!

You aren't much of a competitor but have participated in races. Which would be your favorite and why?
For someone who always talks about how much I hate racing, I race a lot! And for how much I talk about being terrible at bike riding, I’m really not bad.

This year I’m most looking forward to racing the Hellkaat Hundie (MI), the Lumberjack 100 (MI) and Single Speed USA (WI) with my aforementioned BFFFFFFFFF, Alex. I might also hit up Riverwest 24 (WI), I hear it’s a riot! I think all will be great opportunities to push myself, to enjoy the natural beauty of the Upper Midwest, and to socialize.

Single speed is fairly popular with many people I know, are there any tips or suggestions/ things to know for those who have used gears but converted to SS?
The best thing about single speed riding is that I am simultaneously limited and liberated by my lack of options. I actually find comfort in spinning out, falling behind on the flats, and hammering up the hills. I think, “OK, no worries, this is where I and my bike are at right now, this is literally as fast as we can go, we’ll get there when we get there, and this is the best we can do.” It’s very Zen to me. Once you get that, you’re gonna have a great time!

What do you love about riding your bike?
What DON’T I love about riding a bike? I meet so many amazing people from around the country from both the racing and the bikepacking/touring circuit and on the advocacy side I get to be involved with my community in meaningful ways. I eat all the food and drink all the beer (generally) without consequence. I save lots of money, which is then funneled right back into my bike.

Tell us about your bike(s), what they are like and why did you choose them?

…all are practical, distinctive, and endlessly customizable- perfect for letting off steam, racing, light touring and camping, cargo-loading, tot-hauling, and fleeing the impending zombie apocalypse.

Tell us a random fact about yourself! 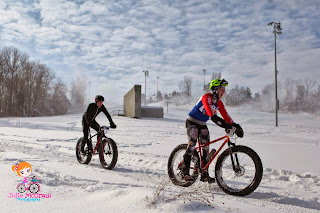 My diet is largely based around tacos – Tex-Mex ‘American’ crunchy tacos, fusion tacos, vegan hippie tacos, breakfast tacos, dessert tacos, truck tacos, food stuffed into a lettuce leaf and erroneously called a taco… name it and it’s probably on the menu for at least one meal today. I’m not sure how tacos translate into performance, but damned if they aren’t the most delicious.
Labels: interview