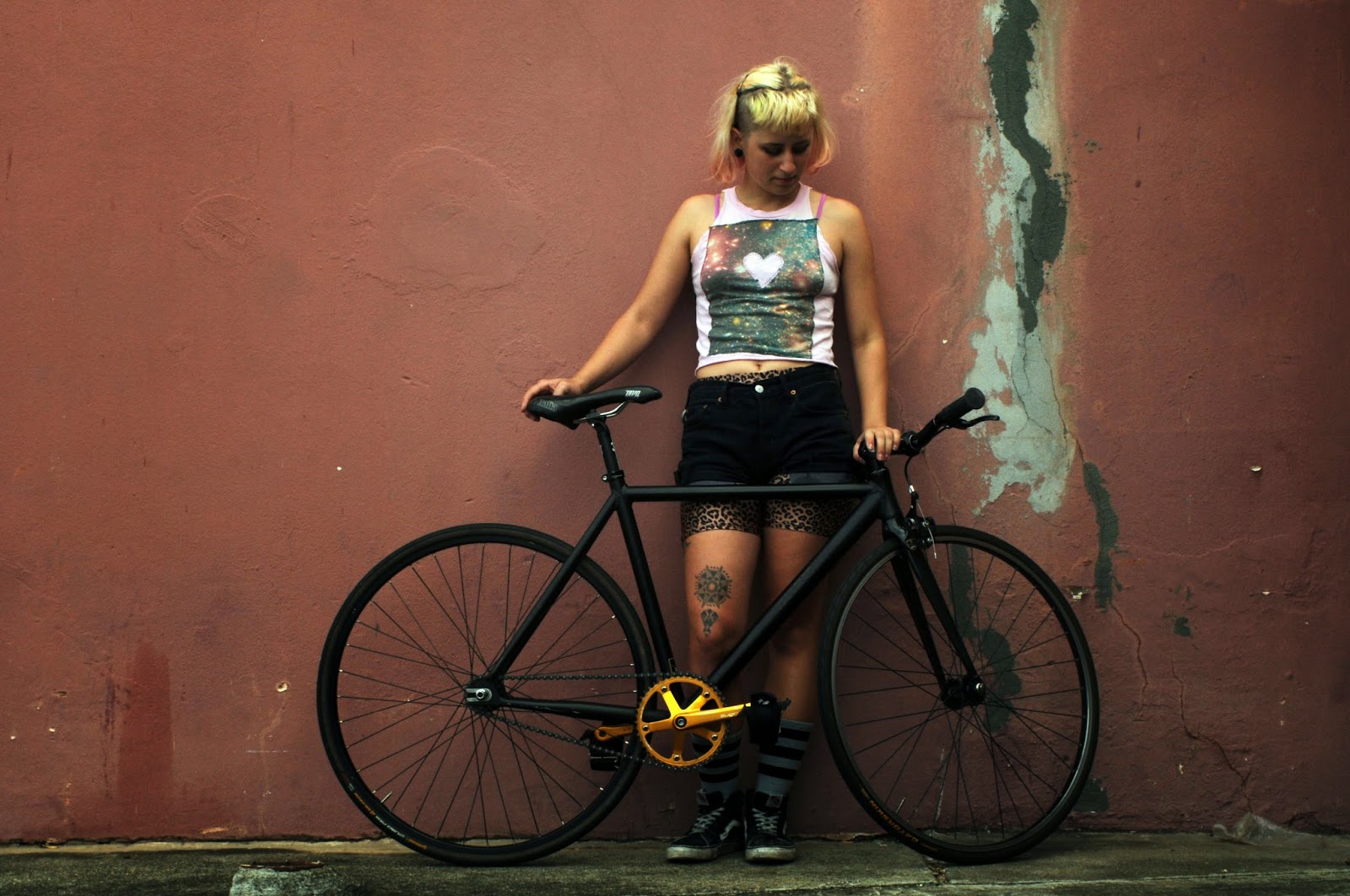 "I'm a mechanic at Velo Cycles in Melbourne, so when I'm there I'm mainly doing servicing or repairs or talking to people about their bikes.


With the help a bunch of great people, I've also been involved in a new women's/non-binary/gender diverse bike maintenance collective called Wrenchworthy Bicycle Shed, which is very exciting.


I'm also a recent art school graduate with a focus on printmaking and tattoos, and I have a seriously intense love for pole dancing and Muay Thai fighting. Between all that I keep pretty busy."


What inspired you to seek employment at a bike shop?
Bikes have always been a huge part of my life, when I was growing up my mother was a passionate cycling activist in Sydney (tough slog), my father ran a catering business out of a modified cargo trike and my older brother was a bike mechanic in Newtown - I remember at our peak we had fifteen bikes between the four of us. So it made a lot of sense, all I had to do was get over the hurdle of "how could a young woman like me be a bike mechanic"? In the end a string of horrendous cafe jobs gave me the prod that I needed to go for it, going into my local bike shop and hassling them nearly every second day for about three weeks until they finally hired me.

Are there any other women who are employed at the shop?
Yeah, there are two other women who work at Velo, both sales staff. It does make a difference not being the only woman like at the first shop I worked at, but I look forward to the day when we're no longer a minority and a more balanced mix of genders is standard.

What do you enjoy about working at the bike shop?
I enjoy working with my hands, and I love it when I figure out how to do something that I couldn't do yesterday. I love when women come in and express relief or happiness about being able to speak to a woman about their bikes - bike shops can be unwelcoming places for people who are not men and it feels good to be part of making that space more inclusive. And I enjoy when younger kids come in and see a woman working in what has traditionally been a masculine role, undermining traditional gender roles in their impressionable minds.

One of the highlights was a couple of weeks ago showing a young girl of about 6 how to replace a spoke - she was really curious and when I asked if she liked to build things too she said yes. It was great because I feel like it was encounters like that when I was growing up that encouraged me to be who I am today so it feels important and exciting to be on the other side of it.

Have you had challenges at the shop?
Yes, though my current shop is much better than my first one, ultimately the cycling world is a masculine space and it's challenging to be a feminine person navigating that. It's the little-big things that get me, like male customers insisting on trying to help me with physical tasks like lifting their bikes into the stand (like every single shift) or assuming that I don't know something because of my appearance ("I don't know if you know much about this, but...") or needing the opinion of a male mechanic as well before they believe what I'm saying. But I feel like it is getting better in some ways. I just wish I could feel like I didn't have to pretend to be more masculine than I want to be in order to be taken seriously. I am excited for the day when I can feel comfortable wearing a skirt to work!

Any tips on what helped you understand the mechanical aspects?
Trying to remember that everyone (even dudes) has to learn by doing and to trying not to be too self-conscious about making mistakes sometimes even when I'm worried about seeming to be the clueless girl that people expect to find. Also google.

What do you feel are common misconceptions about women who work at bike shops?
That we're frail and less competent. It can get really boring.

Why should women not be apprehensive about seeking employment at bike shops?
Well there will be different challenges and it will be hard in ways that don't apply to our male counterparts, but every one of us that pushes our way in makes us all harder to ignore or disrespect.
And ultimately we just deserve to be active participants in the cycling world if we want to be, so let's do it.

What are some of the things you’ve learned since working at the shop?
Well aside from all the super cool mechanical skills that I've learned on the job, I've gained a lot of self confidence and I'm getting better at asserting myself.

Tell us about your personal bike(s)!
The bike I ride everyday is a fixed gear mongrel that I've built up from a Pake French-75 frame. I love it because it's nimble and reliable and handles the city perfectly.
But for the things that it can't handle, I built myself a Surly Long Haul Trucker as a touring bike with dreams of riding off into the sunset, so that's pretty exciting.

What clothing/bike accessories do you love? What would you recommend to your friends?
I'm kind of in love with my Aerotech padded lycra bike shorts with the big blue roses on them. They're pretty fabulous.

What do you feel deters women from getting involved with cycling?
It's a very male dominated culture. In my experience, we often see ourselves represented in it as objects in bikinis draped over impossibly clean track bikes or looking cute in cute dresses standing next to our 20kg+ steel retro bikes, while the images of people actually riding or fixing are usually images of men. The scenes, clubs and shops are often male dominated too, and there tends to be a real feeling that we will not fit in, we will not be taken seriously, or we will be objectified - which is pretty justified.

What do you feel could happen to make changes and/or encourage more women to ride?
Well I feel like ultimately the men who participate in this culture need to start really thinking and talking about how they can undermine their dominance in this space and make a culture that is welcoming and inclusive to participants of all genders. It's not enough for men like my male co-worker to tell me that it should be fine for me to participate in male-dominated groups because I'm "not that girly" - as if I need or want to assimilate in order to fit in. Men need to be asking why women and feminine people don't feel comfortable in the first place and start getting serious about doing something to counter it.

But good things are happening, there are so many amazing female cyclists doing incredible things and it is really heartening and encouraging to see us creating our own spaces, our own rides and dude-free autonomous collectives like Chain Lynx in Sydney or GirlRide in Melbourne, and it's great to see that more and more shops in Melbourne and Sydney are actively seeking mechanics and staff who are not men, as well as more and more cycling groups who are actively making an effort to make themselves inclusive. It's also great to see local councils like Darebin, where I live, running regular cycling courses to encourage people to get started. 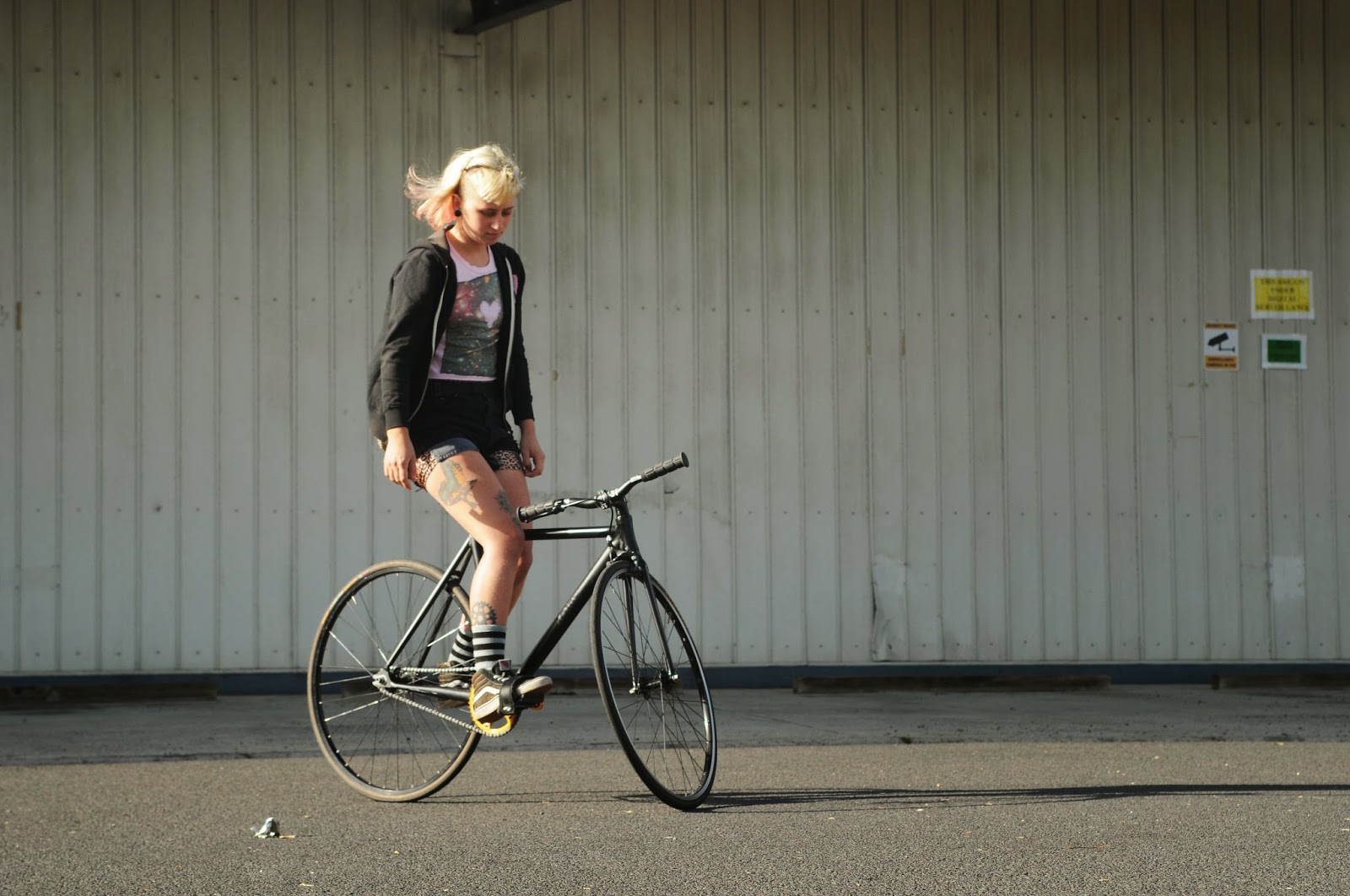 What inspires you to encourage women to ride?
We deserve to be able to!

Tell us a random fact about yourself!
I am a Trekky. There, I said it. (Next Gen onwards only)
Labels: interview