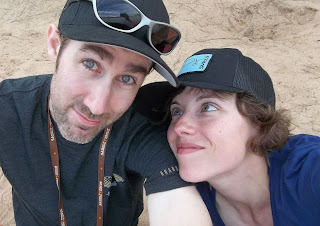 Let me tell you, climbing hills in Utah is unlike anything I've climbed in Decorah. I experienced half-hour climbs that challenged me immensely. On our second day of riding, my legs were shot.

My excitement and over-zealous enthusiasm made my body quite fatigued. It seemed that I could eat an endless amount of snacks and drink as much Skratch hydration mix that I'd want and I still couldn't get myself energized.

For the start of the second day I rode the Surly Instigator, which boasted 26+ wheels, which equates to feeling like a 650b set. At the show there were some set up as 650b and others as 26+. For the life of me I can't remember which I got- I'm pretty sure 650b tho. 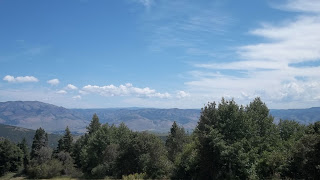 The downside of my ride on this bike was A. the gearing just wasn't "Josie Friendly," especially for the climbing I had been doing. B. I needed to let air out of the front suspension fork- most of my ride was pretty harsh because I didn't eat enough cookies. (Ha!) In all honesty, the bike was alright, but it wasn't my favorite ride. Traction was great, handling wasn't bad- just a few things I'd need to tweak to make the ride a better fit for myself.

Travis rode the Surly Karate Monkey SS- "The Karate Monkey is a steel classic and is a trail machine all day. Being single speed, no rest for the wicked on this bike."

My second ride of the day and I'd say my second favorite (overall) was the Salsa Spearfish Carbon SLX. This bike featured a Fox FLOAT Performance fork and shock as well as familiar 29" wheels. I felt really confident on this bike given the smaller tire diameter vs. large, rounded rocks. The suspension was set up specifically for me and that helped a lot. I felt rejuvenated and enjoyed the nimble feeling of this ride. 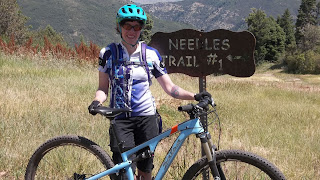 The funny experience I had with this bike will forever stick with me. I'm too comfortable with 1x systems to think about paying attention to bikes not set up the same. This was a double, and I failed to realize that on a half-hour climb. I made it to the top, but I was questioning myself on how much more climbing my legs could take. Travis noticed it was a double, "You can shift!" along with "You are a strong woman!"
Let's say that we were both dually impressed with my leg strength that I didn't know I had. I can also say that the rest of the ride (which we found a full loop that was super fun!) was most excellent and less challenging.

Lunch was a welcome break and something that I knew we had to partake in so we could fit in one last ride. Our goal was to do the loop we found one more time. I made probably the most huge burger ever. (Well, no world records were broken, but I did eat it in under 10 minutes.)

My final ride was the Salsa Mukluk, which I found to be an alright bike but a bit more "bike" than what I needed due to the tires. I'll blame the fatigue.
The suspension was nice, but I felt like the tires were overkill for me, but I will say that it made going over rocks easy. 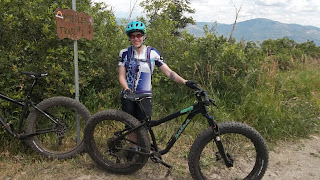 SaddleDrive was an amazing experience for the two of us and I feel so fortunate to have gone. We got to meet some awesome people, make new friends, and see/try new products. For example, the Skratch Labs cookie mix is AMAZING! Holy cow. I was so grateful for a delicious tasting cookie, and if you were lucky- you got one with bacon!!! 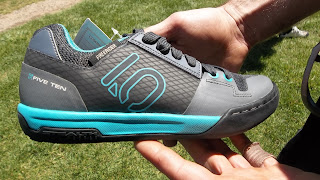 Things we are excited about:

New Women's Five Ten Contact shoes
(available around October or so.)
Read my review on the Women's Freerider Shoes. 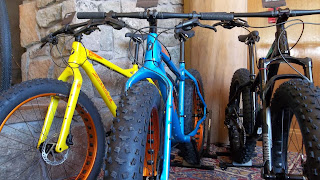 Salsa Mukluk X7's that will be brought in for fatbike rentals!
(The yellow and blue bikes- can't loose 'em in the snow!) 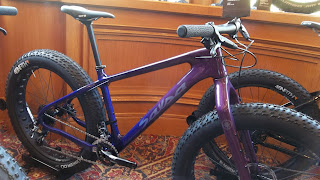 This bike for me!
(a future 650b+- see the white Beargrease below.) 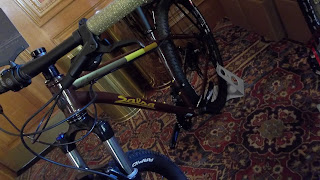 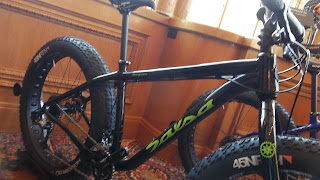 Salsa Beargrease X5
An aluminum fatbike with TLR rims in a reasonable price point of: $1,599 (also comes as a frameset for $999- aka custom build one of these!)

Thanks again, QBP, for a wonderful adventure!


Want to read more about my first mountain bike experience outside of Decorah, Iowa? Check out the post featured on IMBA's Dig In blog!