Bike Life Interview: Meet Ed and Cory aka The Duke of MTB 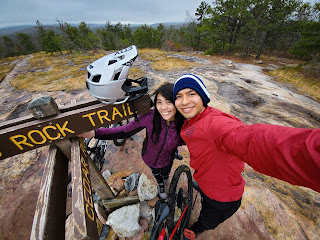 Who are the folks behind the camera?
Edward & Cory, aka The Duke of MTB
Outside of the channel, we're mostly just a regular couple.
We've been together since college. It's been thirteen and a half years now and we've just always done everything together.
I've been in the flooring business for almost a decade and Cory's a BSN-RN, but mountain biking is our true passion. We're always counting down to the day that we can ride again.

When it came to mountain biking, did you both start together or did one of you introduce the other?
We started together. It was by accident really. We were looking for something we could do together to break up the daily grind of work, sleep, rinse, and repeat. We bought some cheap bikes and started riding on the sidewalk at first. One day, we saw a dirt path that led into the woods. It turned out to be a "green" mtb trail. The bikes broke right away but we were hooked. That green trail at the time felt exhilarating. It all just snowballed from there.

What inspired the two of you to create your YouTube channel?
About a year into riding, we were planning to go to visit family in Alberta and bring our bikes. Cory insisted that we buy a GoPro to record our "adventures" there. I was resistant at first. I tried to explain that it would be a waste of money. We would use it once, see that the footage doesn't look as good as the GoPro commercials, and it would sit in a drawer for the rest of time. She was persistent though, so we bought a GoPro anyway. My OCD just kind of took over. We recorded some footage in a kind of vloggy way to make a video that we might post for friends and family to see, but I just randomly decided to make a YouTube account and post it there. Again, it all just kind of snowballed from there. I found that I enjoyed doing it. It started as a hobby on top of a hobby.

Was either of you nervous when it came to launching the channel?
Not really. The nervousness came after we actually started getting views and comments. I was like, "Oh, sh*t, people are actually watching us."

The channel showcases the awesome, humorous, and human moments of riding- why do you feel it's important to show even the less-than-ideal stuff?
We really just wanna show that we're regular people. Not everyone can do backflips and stuff. We crash a lot. Things happen. We want to show that it's okay to just have fun and that you shouldn't worry about what people might think. There are enough channels out there that just show "badassery" done by people that seem like bike gods.

What has been the most interesting thing that has happened to you since creating the YouTube channel?
It still feels weird when people recognize us. I still can't quite wrap my head around that one.

What has been the most challenging part of having your YouTube channel?
Editing. It's so much work to take hours of mundane footage and turn it into an entertaining video. When I'm not at work, I'm editing. It can be a little much at times.

What are your (current) future goals for the Duke of MTB channel?
It would be nice to grow the channel to a point that it can sustain itself, so we can really focus on making entertaining content. We hardly have any time to make videos, and that's with me burning the candle from both ends. The ultimate goal would be to travel the world, riding trails all over the place and making videos of all our adventures. It's a little "pie in the sky," but it doesn't hurt to dream big.
How can folks support you?
At the moment, we don't have a Patreon account yet. I just don't have the time to offer any extra perks or content due to work.
But...if someone would like to make a one-time donation, we have a PayPal link here:
https://www.paypal.com/cgi-bin/webscr?cmd=_donations&business=thedukeofmtb@gmail.com&lc=US&no_note=0&item_name=&cn=&curency_code=USD&bn=PP-DonationsBF:btn_donateCC_LG.gif:NonHostedWe also have a merch store:
https://teespring.com/stores/thedukeofmtb
and an Amazon storefront you can make some purchases through:
https://www.amazon.com/shop/thedukeofmtb
2020 has been a year of change and growth, what would you say has been something you both have learned in 2020?
Don't take things for granted. Enjoy every moment. Go out there and experience things with people you care about. At the end of it all, that's the stuff that you'll look back on. That's the stuff that really matters.
Labels: duke of mtb ed and cory mountain bike mountain biking youtube youtube channel