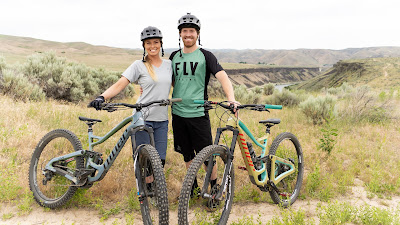 This year Travis and I discovered an awesome YouTube channel called Kyle and April- Ride MTB and it's been one that we have started recommending to folks on a regular basis who are new to mountain biking.
One of the things I've loved about watching videos on this channel is seeing April progress during the video, which is awesome to see as most videos out there are of folks who are already super great at a skill, teaching that skill. To be able to see someone practice and visibly progress is inspiring and helpful.
I reached out to Kyle and April to learn a bit more about why they started Ride MTB and what their plans are for the future. You can learn more about Kyle and April here!
How did mountain biking/biking in general, bring the two of you together?
On a macro level, mountain biking is 100% responsible for us meeting. April is a gear designer at a motorcycle racing apparel company called Fly Racing and back in 2016 they were in the early stages of launching their mountain bike program. They wanted to find some athletes to help them market the new Mtb gear and they reached out to me to become an ambassador. On my first trip to Boise to meet with Fly they had a big company-wide lunch and I actually ended up sitting down across from April and got to chat with her for a little bit. To be honest, neither of us really thought anything of it, but a year later we connected again at a big company gear launch and we got to mountain bike all day together at a ski resort and just really hit it off. It was one of April's first times riding a mountain bike, and she had such a great attitude and was so fun to hang out with. Since then mountain biking has been such a huge part of our relationship. It's allowed us to share a passion, travel together, and push each other. Without mountain biking, we wouldn't have had the opportunity to meet and share our lives together.

What inspired the two of you to create your YouTube channel?
Honestly, it kind of just happened organically. I had seen the impact that YouTube was able to have on people a few years ago while I was at the Sea Otter Classic event in Monterey, California. The line for a Seth's Bike Hacks meet and greet was the longest line in the pits and so many people were so excited to meet him after spending so much time watching his videos. I just thought that it was so cool how he was able to connect with people and I started my own little YouTube channel and started experimenting making some videos and trying to learn how to use a camera. After about 2 years of messing around with YouTube and acquiring camera gear, we found ourselves in the middle of a pandemic, with all of the races and events canceled, and a lot of free time. It was April's idea to try to learn some new skills over the lockdown and try documenting it. We never expected it to be something big, and that's why at first it was just still titled under my name as the channel. After a few videos started to get some serious traction it was apparent that people were enjoying them for some reason and we should try to do some more haha. At that point, we changed the channel name to Kyle & April - Ride MTB and the rest is history :)

Was either of you nervous when it came to launching the channel?
We are both somewhat private people so we were nervous about putting ourselves and our relationship out there for people to judge. Surprisingly though the majority of all the response has been really positive. There has been some negative stuff here and there which can be really tough but overall it's been a really cool experience.

For many, having their partner coach them with mountain bike skills can be for lack of better words...challenging. How do the two of you make it work so well?
Honestly, we aren't perfect by any means. We try our best to work well together and to be understanding of each other but there are times that the film days can run long or there can be frustration over learning something new. I think that having a shared goal of creating the video really helps us a lot though. It allows us to get through any of the rough patches throughout the film process and see light at the end of the tunnel haha.

What inspired you to start mountain biking?
April: When my work, Fly Racing, started making MTB apparel there was more of a buzz around mountain bikes around the office and I would more regularly see bikes in the back of trucks, so it was in my face more than ever and the interest came naturally from already having a long term passion with dirt bikes. It took me a little longer to actually pursue MTB because I was overwhelmed with the number of options that go into getting a mountain bike as well as pricing. When Kyle and I first started dating, I was able to borrow one of his bikes and he eventually did the hard work for me by picking a bike for me and gave me my first one for my birthday!

You are so inspirational when it comes to showing your progression! Do you have any words of advice for folks who are nervous about working on skills?
April: Thank you so much! I am also trying to figure out some of that for myself, but I can share from where I am at so far. I am known for my stubbornness and I also have a strong desire to conquer things, it can become addicting for me to be able to check things off. So basically I don't give up too easily. Passion is also another factor that drives me even further and can be very crucial. I would say that I work on many skills, probably too many, and am always trying to better myself. I just want to be a well-rounded person (except musically, there is no hope for me there haha).

Tell us about "Look for Success, Not for Failure" and why that's a good phrase for folks to keep in mind-
April: That saying actually came from a corning video that we did when Kyle was giving tips on where to look in a corner. Many things learned with riding or racing also apply to other areas in life and this was one of them that really stood out to people. When applying it to life, It is kind of another way of manifesting your destiny with your thoughts or actions and works really well in a corner too!

What are your (current) future goals for Ride MTB/YouTube Channel/Podcasts?
We actually have some really exciting plans for 2021! We just bought a building to act as our HQ and Film Studio. We really want to try to slowly grow the channel to be something bigger than just April and me. We will be announcing the studio in the next week or so and then plan on building it out through a series of videos. It will serve as a bike shop to film maintenance videos, a podcast studio to host some round table style podcasts, and a merchandise warehouse for some of the new stuff April has been designing :)

How can folks support you?
We have had a lot of people reaching out via Patreon which has been amazing! Also, a lot of people have helped support us by buying some merchandise. It has been really fun doing some clothing this year and we have some big things we are working on for next year :). The shop / HQ is a huge investment for us but we really want to do something special and try to build something bigger than ourselves so we can reach as many people as possible.

2020 has been a year of change and growth, what would you say has been something you both have learned in 2020?
Kyle: The biggest thing that I have learned this year is how small and connected the world is. It's been insane to see just how many people stop us and say hi or thanks for the videos while we are out on the trails. It's been really cool to see :)

April: I feel like I have learned more than I can put into words. The obvious for me is that I have learned so many skills this year and more about MTB in general. But maybe the biggest thing is my communication and people skills. I am more of an introvert and shy person, so it has been a really big improvement for me this year and I look forward to getting better at it.
Kyle and April- Ride MTB Instagram
Kyle and April- Ride MTB Facebook
Ride MTB Website
Kyle's Instagram
April's Instagram
Labels: april kyle kyle and april kyle and april ride mtb mountain biking Ride MTB