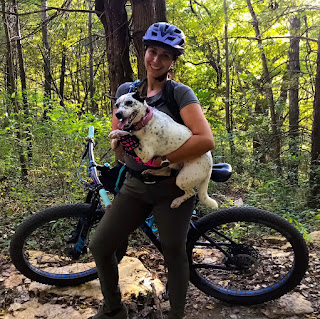 I am an engineer located in Albuquerque, New Mexico. I was born and raised here, although I spent some time out in the midwest for work.
I am of mixed race -- my mother's side of the family is mostly Norwegian, and my father immigrated from India when he was five. Growing up in New Mexico, there's a huge Hispanic population so the difference in my skin tone wasn't anything out of the ordinary for the most part -- it wasn't until I moved to the midwest that I felt my visual look set me apart from other people.

As far as mountain biking goes, I picked it up a little over 4 years ago. I fell in with a group of mountain bikers and figured I'd give it a try and I became addicted to it very rapidly.
There's something about mountain biking that engages my brain and my body in a way that is extremely satisfying.
What are your preferred pronouns?
She/her

Being a BIPOC, have you felt that you had to go the extra mile to prove that you belong in the cycling community?
This is an interesting question! As women are already at a disadvantage in the cycling community, it's hard to even dissect what obstacles I've had to overcome due to race vs. my gender. I would also like to point out that as an Indian, I see significantly less bias towards my race than others -- in fact, in some instances, South Asians have a positive bias because only skilled workers were allowed to immigrate starting in 1965 with the abolishment of the Immigration and Nationality Act, which is also the same time period my father immigrated. The systemic racism that Black and Indigenous people face in the US is rooted in the history of how we've treated these people since the beginning of our country; S. Asians do not have a similar heavy history in the US.

What would you love to see happen in the industry to make it more inclusive to the lgbtqia+ and BIPOC communities?
The main thing I've been focusing on is promoting the images and voices of lgbtqia+ and BIPOC in the community. It's hard to pick a single thing to make the industry inclusive, but the first steps for the images of people of all colors, sexualities, and gender expressions to be normal. I also think there's a lot to be said about allowing space for people to control the way their content is going to be promoted -- the one thing I'm wary about is companies trying to capitalize on the current movement by bringing BIPOC on board, but still controlling their narrative and image, which leads us to...

Do you have any favorite cycling-specific organizations/groups that are BIPOC and lgbtqia+ friendly that folks should know about?
There are a ton of great ones out there, but I would start with @theblackfoxes on Instagram! They're a black-run organization promoting black cyclists of all types. I also love following Alexandra Houchin, although she does not have a strong social media presence. She does have a blog, and there are a ton of interviews, podcasts, and articles on her for those who aren't familiar. Rachel Olzer is also a great mountain biker to follow on Instagram. As a side note, while this isn't cycling specific, @pattiegonia on Instagram does great things for the lgbtqia+ community in the outdoors. 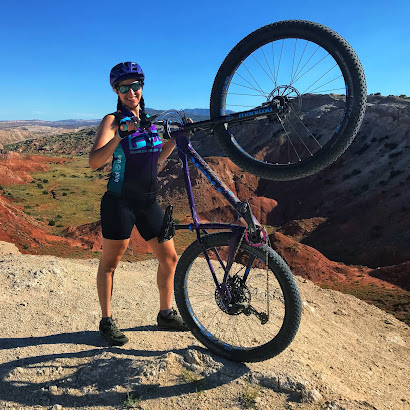 Any final thoughts/ideas that you would like to share?
If there is any main takeaway I want to emphasize it’s that while we've always tried to label the not-white folks (first PoC, now BIPOC), it's very hard to apply blanket statements to the entirety of people who aren't white. Every racial group faces its own distinct biases, and each one needs unique solutions to it to fix it, which is hard to do for every single race. The best thing anyone can do right now is to keep an open mind, and listen to folks who aren't like you with an open heart.
Diversify your feed and be open to learning things. Also be willing to make mistakes, because it will happen. It's just like mountain biking; you're going to crash sometimes, but the important part is to get back up and keep trying.
Labels: BIPOC fearless women of dirt inclusive inthistogether involved LGBTQIA+ POC