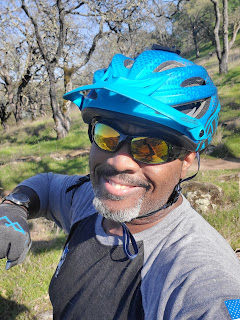 Hello, My name is Derrick A. Holland I am 43 years old, married Two kids. I am a former Military brat (Air Force), Suisun City, California is my adopted home.
I have been a teacher for 19 years, I have coached Track and Field, I earned my blackbelt in Kajukenbo, I started mountain biking 4 years ago as a way to get healthy. Start it for health reasons but ending up falling hard for it. I am a major lover of Music. I started playing bass 3 years ago. I ride a 2016 Diamondback Mason Trail 27.5 +, it has held up from my weight at 390 to my current weight.
I rode bikes as a kid but I reintroduced myself when I was 40 after I had a deep conversation about my health with my family that lives in Portland, Oregon.

Being a BIPOC, have you had any issues establishing yourself in the cycling community?
Yes. I would say that people base your abilities on the trail and in the shops on how you look. On the Trail, they seem to question you more about if you can do something or not.
In the shops, they will automatically assume you either you have no money or you don't have a clue. Then there have been times when I have checked out shops and I let them talk about bikes to see what they are going to tell me. They show me the cheapest stuff and the weakest gear. But once I start showing that I do know something they start showing me better stuff.
A buddy mine who is BIPOC had $5000 to drop on a bike and he went into a shop and they treated him like he had $5 dollars. As he walked out he told them how much was going to spend and then they all of a sudden seem like they cared. He was like nope and left.
Being a teacher I am big into doing research so instead of going through the local shops I just start learning a lot of the stuff about bikes through youtube and reading articles. I only go through local shops when I need stuff sooner than later.

What has been your favorite part about documenting your weight loss by bike journey on Instagram?
My Favorite part is seeing the difference in size from when I started to present. I am like wow I lost the equivalent of a 12-year-old human! I post because it motivates me and It motivates other people. I like showing people that it can be done, never say never. Also, you are never too old to start anything.

How do you feel documenting your #bikelife journey has helped to open doors to more inclusivity?
I want to shows that biking is not just for certain groups that it is for everybody. We need to get out of the habit of saying " white folks do this" and "BIPOC do this" !
We need to stop letting society pigeon hole us into these boxes. Because people are missing out on a lot of things that they could love or potentially be good at. For example, my brother and his friends were Skaters growing up. A mixed group of kids. They were the first group to push for a skate park in Fairfield Ca.
I love seeing BIPOC and LGBTQIA+ doing things outside the Box! Don't let society define you.

What would you love to see happen in the industry to make it more inclusive to the lgbtqia+ and BIPOC persons?
I love how Diamondback and SRAM have both said that they are down for Social Justice. @SRAMMTB Post on their Instagram " Black Lives Matter" I was like wow you see me!
@Diamondbackbike posted on their Instagram "Stick to bikes". They were echoing what some customers have been telling them but they took it further. Here is the quote: "We have also been told to leave politics out of it and “Stick to Bikes”. We are going to do both. We believe bikes are important. We believe they provide mobility, a way to a healthier lifestyle, and a tool to simply get out and have fun. We also believe bikes can be a tool for social change. We want to support all people, especially BIPOC, in joining this community and to feel safe doing so." I was like Holy Shit you just got a lifetime customer!
Because people will say race is not an issue but they say it isn't because nobody talks about it. Also, they don't see it as an issue because the sport is predominantly white. I have seen a total of 12 BIPOC on the trails where I live. Other places there might be more. When it doesn't affect you, people don't see it as a problem. Companies cannot turn a blind eye to society's ills. They have to take a stand. "Once we can see things as a WE problem and not a YOU problem the world would be a better place." 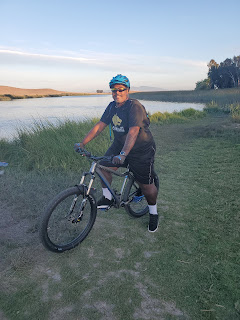 It is insane to think that societies' ills don't affect other parts of life. They also need to put more BIPOC and lgbtqia+ in the advertisements. representation is very important. Because if a person sees a rider in an advertisement that looks like them, it might be the spark that gets them out there riding. Plus for African Americans, bike riding is apart of African American History.
For example, there was a Regiment of Buffalo Soldier that rode bikes all through the west. Isaac Johnson, while not the first person to invent the bicycle frame, was the first African American to invent and patent a bicycle frame that could be folded or taken apart for easy storage. Also, Major Taylor was the first African American Cyclist Champion.
Do you have any favorite cycling-specific organizations/groups that are BIPOC and lgbtqia+ that folks should know about?
@Allmountianbros, @blackgirlsdobike @pedal2thepeople @patagonia_mtb, @blackmenbike are a few

How can we, as a collective, ensure that the cycling industry is more inclusive?
Support causes that represent other groups that are outside of your norm especially if they benefit the collective as a whole. invite your friends to come along for a ride.
Support causes that push for inclusivity.
Any final thoughts/ideas you'd like to share?
I am a lifer for riding. The more riders the better. Once a person sees my humanity then they can say that we are all riders. One Love and Much Love.
Labels: bikelife BIPOC interview LGBTQIA+