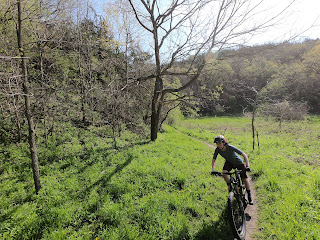 The singletrack trails located in Decorah, Iowa are some of the most unique mountain bike trails in the Driftless area. They would be classified as "old school" in terms of being completely hand-built and not machine-built. They twist and wind around the bluffs, giving you a feeling of being far out of town when you're actually minutes away from joining civilization.

These trails are challenging, and I can say that because I learned to mountain bike on them. As a new rider, it took a lot of perseverance to learn on the local trails. They are riddled with punchy climbs, quick descents, and twists and turns.

Some areas have trees that are close together, and many a bar plug has been lost in the woods. I should know as I've lost a few myself!

Eventually, there will be trails at Carlson Park to enjoy, at the moment there is a perimeter loop that is bikeable.

There are roughly 20 miles of dirt trails in Decorah, and all of the trails can be ridden both ways (tho there are some that are definitely not as fun to ride up!) They are also multi-use, so you may encounter hikers/runners, and the occasional horseback rider. (Not all of the trails are equine friendly.)  Each of the parks has its own flavor, but all will have a fair amount of climbing to get to the top if you go by bike.

Palisades Park and Van Peenen both are driveable to the top if you are wanting to eliminate some of the challenges if you desire. There isn't an option to drive up to the top at Dunning's, so you'll have to ride uphill, and there isn't a truly easy way up at this point. However, once you are up on top you can enjoy some beautiful overlooks as well as some easier riding.

There is definitely something special about the Decorah mountain bike trails as often I'll hear from folks that stop at the bike shop that we have a gem of a trail system. It may not flow together as nicely as some, and there are comments on signage both ways (not enough/just right), but folks from different areas seem to enjoy the unique flavor that the local system has to offer. Download MTB Project or Trailforks for the most complete mapping. There are signs at the beginning and end of each trail, but there won't be anything at intersections or offshoots to let you know where to go. If you can't ride with a local, the apps will be your best bet to ensure you know where you are at/where to go.

When I started mountain biking, what helped me get past the challenging stage of learning was keeping in my mind "If you learn to ride in Decorah, you can ride anywhere!" I was curious about how that would play out, so I kept my determination high. Turns out, they were right!

Because Decorah is climb intensive for being a non-mountainous area, my climbing technique became strong. I found that most of the areas I rode were not as climb-intensive, and that made me feel that those areas were easier to ride. For example, I did the Borah Epic in 2017 and found that it was not as challenging as I thought it would be to ride over 35 miles of mostly singletrack. I was tired, for sure, but if you had asked me to ride 35 miles of Decorah trails I would've been far worse off!

My first Chequamegon race I played leapfrog with a woman during the final stretch of Birkie rollers. She said that I was a good climber and asked where I was from and was shocked to hear I was from Iowa (which is commonly known to be flat.) I explained to her that Decorah was far from flat and that there was a good bit of elevation to contend with.

Decorah has a lot of hard-pack dirt/clay trails with some areas that have exposed roots and/or limestone rock. You'll find tricky areas to maneuver over when riding either up or down, and in order to be successful, you have to learn finesse rather quickly. Especially when certain times of the year have humidity because so often rocks and roots will be slippery. In our area, most of the trails can be rideable rather quickly after a rain of the temperature is good and there is a breeze, but you'll still have to contend with slimy clay or wet leaves. You learn when you can go fast and when to tone it down along with body posture to give yourself the best chance of making it up a tricky climb. 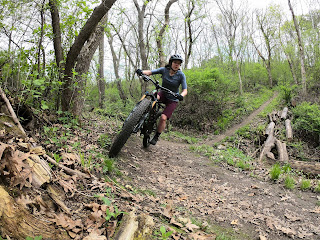 The three parks have similarities yet differences with how the trails are in terms of rock/root/dirt.
If you are afraid of drop-off ledges, Dunning's Springs would be a park to ease into as certain trails will have open ledges that could make someone nervous if they dislike heights. In my opinion, Dunning's has longer climbs- which means the downhills can be a little longer. However, it can be challenging for someone who may not have a lot of endurance/stamina or asthma.

At this point, there are several unmarked intersections at Dunning's that could trip you up. You'll be at the top and the next thing you know, you're back at the bottom. That can be fun for some, but not for others, especially when it comes to climbing back up.

Van Peenen doesn't have much for ledges similar to Dunning's, but when you ride the Gunnar trail don't look off to the side if you don't like heights. In my opinion, the climbs in Van Peenen are punchier and not as drawn out- this means the downhills may not be as long. You'll work on bursting up more rather than grinding out. The one bonus that Van Peenen has for newer riders is you have a lot of mowed prairie you can ride as well as the Pines trails (East & West) which can be good for boosting confidence.

Van Peenen also has a great intermediate trail called IPT- which gives you a dose of just about everything you can anticipate when riding our trails. You'll have punchy climbs, descents, twists, turns, rocks/roots, and exposure. If you can ride IPT cleanly, you'll have a pretty solid skill set to ride most everything else.

Van Peenen has some intersections, but I don't feel as many as Dunning's. That's all opinion tho, but the nice thing is that there are 2 kiosks located in Van Peenen that can give you a sense of where you're at. Like I mentioned before, it's ideal to use an app rather than the map, but it's better than absolutely nothing.

Palisades hosts some of the older singletrack in Decorah and it also has some scenic overlooks. There are not as many offshoots or intersections, so it's harder to get turned around or lost in Palisades. The one thing that might be seen as a drawback is when you are riding up or down, you'll cross a road that vehicles will be driving up (to the overlooks) and you'll need to be watchful. Vehicles aren't supposed to drive fast up the road, but certain times of the year you may encounter youth blasting up the road when school gets out. Personally, I do sometimes avoid Palisades during weekends, especially popular ones when it might be homecoming or a holiday, simply due to the vehicle traffic.

In Palisades you'll find one of the more technically challenging trails called Dead Pet. This trail challenges the tech-loving rider with big rocks, roots, climbs, and more. It has multiple entrance/exit points, so you can choose your adventure with which way you want to go.

It also houses a trail called Smeby's, due to it passing through Smeby's yard. It can be a fun downhill exit or a very challenging climb into Palisades if you want to ride down all of the trails without riding anything twice.

The mountain bike trails in Decorah, Iowa are beloved by many, garnering attention from folks up in Minneapolis all the way to Colorado. There aren't many communities I've been to where you can hit local singletrack in 2 minutes or under. In general, we are super blessed in this community to have the trail access we do and are fortunate to have more coming in the future.

Also, if conditions are right Decorah provides a unique winter biking experience! We do groom our mountain bike trails in Van Peenen and Dunnings for fatbiking as much as we can, however, unlike some areas where you can groom wide we are unable to do so. You'll be fatbiking on legit singletrack, which makes it fun and challenging! The Pines trails in Van Peenen are absolutely stunning in the winter. 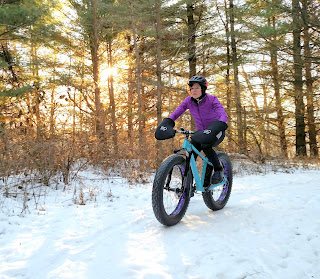 A personal note: if you are a mountain biker who has a YouTube channel or blogs and wants to come to ride our trails, I highly encourage getting in touch with me for a guided ride prior to your filming ride. Even with signage and apps, folks often get turned around, and that can lead you to spend more time trying to figure out where you're at rather than riding. I've also seen or heard of folks going up trails that really aren't easy to ride up (they are more or less intended for riding downhill only, and can be dangerous if you are riding up when someone else is riding down.) Certain times of the year may be more challenging for me time-wise, but I will do my utmost to help anyone out! Contact me here and we can work something out.
Labels: adventure Bike Life Adventures explore fearless women of dirt iamspecialized