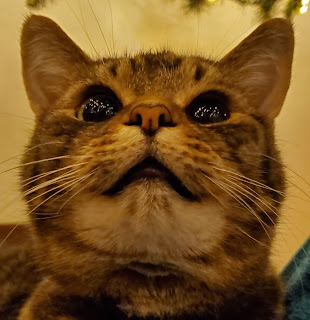 The other night I decided it was time to watch one of my classic childhood Christmas movies, the 1994 version of Miracle on 34th Street. It was a movie my grandma Gert purchased for me, and I'm sure she didn't expect me to keep that VHS tape into my adulthood, nor would she have expected me to turn it into a holiday tradition. Most times I kick off the Christmas movie watching with that movie, but this year I went a little bonkers with watching the Hallmark-esque movies featured on Netflix and Hulu instead.

Anyways, the 1994 version of Miracle on 34th Street is the only one I know, and for me, it is my true Christmas classic movie. In my older years (yes, I'm saying 30's is older years compared to my single-digit years of kiddom) I can appreciate the movie far more.

One message in the movie that struck me hard this year: "I'm not just a whimsical figure who wears a charming suit and affects a jolly demeanor. You know, I'm a symbol. I'm a symbol of the human ability to be able to suppress the selfish and hateful tendencies that rule the major part of our lives. If you can't believe, if you can't accept anything on faith, then you're doomed for a life dominated by doubt."

After that movie, I decided we should watch Prancer. I remember a long time ago seeing the movie Prancer with my mom and step-dad, and I think my two step-brothers. It was one of the few times we all went to a movie together, and frankly, I can't remember much of it. I just remember seeing a reindeer and that's about it. I never saw the movie since I saw it in the theater so many years ago, so I figured there isn't any time like the present.

The relationship that the little girl had with her dad was under a lot of stress. At one point, she goes to rescue Prancer who is being kept in a Christmas tree lot. She had her backpack filled with clothes, because not only was she going to rescue the reindeer, but she was going to run away from home. She felt that her dad didn't love her nor understood her.

There were times that I felt the same way, and I was incredibly frustrated. I felt as tho my dad would've spent more time with me and loved me more had I been born a boy. Little did I know in my younger years, that wasn't the case. It took a long time for me to realize the depth of my father's love for me, and it's bittersweet.

In the movie, all the little girl needed was for her dad to rescue her and tell her he wanted her around. Basically, she just needed to see once and for all that he loved and cared for her...that he wanted her to be in his life. During that scene, I became a blubbering mess of tears and snot. Never have I seen a scene in a movie that so perfectly represented a block of time in my childhood that didn't get closure while my dad was alive.

It's the second Christmas that I'll be spending without my dad. About a month ago while I was going through a purge to donate items to the local Depot, I found a second Christmas card that my dad had made for me. I'm pretty certain that it will be the last surprise card I'll find that I kept, and that makes me sad but also glad. I'm grateful to my past self for keeping some of those memories instead of recycling all of them due to my fear of collecting too many "things."

It's funny how you can see a movie so long ago, and really not have any grasp of what the movie is about. Then you watch it as an adult after you've had life experience, and it brings forth so many emotions because you can relate to it.

As Sam Elliot spoke to the girl who played his daughter in the movie, I felt as tho it was my dad talking to me. All I wish he could've said to me in person, but spoken to me in a movie instead. A movie that I almost didn't watch for a variety of reasons, but chose to. A Christmas miracle perhaps? I'll let you be the judge.
Labels: growth happyness personal