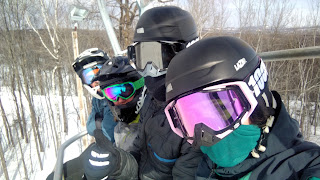 A few months ago, a friend of mine suggested that we (and our husbands) should go downhill fatbiking up in Duluth at Spirit Mountain. Not one to really go on a whirlwind weekend "vacation" I convinced Travis that this would be a great learning experience. Plus, it would be our "last hoorah" before the spring season hit.

Our original weekend was canceled due to extremely cold temperatures. As fun as it sounded, downhilling in -40 or whatever degree temperatures just didn't sound appealing! Fast forward to Mid-February and it would truly be our "great escape" before the busy season would start.

Our friend Libby secured an Air B&B that was close to the ski resort. On Saturday, the 4 of us rolled out in our respective trucks, starting the journey to the "great white north" aka Duluth, MN.

The drive up was simple. I think the best part was the wide array of music one ends up listening to as the radio stations change. From rap to 80's rock ballads...I have decided my life needs to be narrated by 80's ballads. Nothing says "road trip" like singing off key to the likes of Journey, Cinderella, and others.

After hours of driving, we landed in Duluth at the Air B&B and unloaded our trucks. We figured that we arrived early enough to try and sneak out onto a groomed fatbike trail for some bonus riding. Unfortunately, we discovered as we entered the trail that it was definitely not groomed- or if it was, it wasn't packed down. We eventually exited the trail and rode back up the road (as far as we could ride, there were sections we had to walk.) It was beyond challenging (the whole adventure) but I was grateful to have gotten outside. Being in a truck all day really makes you appreciate being outdoors, even if it's not ideal snow conditions. (Duluth had around 30" of snow over a 10 day period?!)

After we got back to the house, we readied ourselves to head out for some supper at the Duluth Grill. Did you know that Duluth Grill was featured on Diners, Drive-Ins, and Dives? I didn't! For folks who look for a beer- we didn't see anything there. However, if you want some really tasty food that is super fresh with unique flavors, and super healthy portions (as in big)...this is the place.

We ordered up some appetizers including the Brussel Sprouts (amazing), Buffalo Chicken Cauliflower (also amazing...and strange), and Onion Rings (yaaas queen.)
Libby and Nick ordered two different bowl options that seemed absolutely huge (and delicious), Travis ordered a Cheddar Burger, and I ordered Wok-O-Tacos (chicken with a delish Korean bbq sauce.) With the appetizers, I can say I was legit stuffed...and then we decided to order 3 pies without knowing that for being small, they would be on the big side! I definitely had plenty to eat.

The amazing thing with Duluth Grill is there is absolutely something for everyone. You can have breakfast all day, too!

We went back to the house, socialized, Libby and I worked on our stretches, and then we went to bed. I will admit that I didn't sleep the best. The bed had this amazing blanket that felt heavy and comforting, but I got super warm. Also, I think I was nervous about what the day would bring on Sunday. Sleep eventually came, but so did waking up.

Libby and Nick worked together to make pancakes, Travis went out to get butter and bacon. We sat at the kitchen table, ate, and got excited about the day. I was so happy with the breakfast, it was the perfect amount for this notorious "I don't really like eating in the morning" eater.

We got ready after breakfast, donning layers upon layers. I worried that maybe I didn't bring enough to wear. What if I would get cold? How would I survive? Should I double up on baselayers? Should I have more hand warmers? The list goes on. I decided that I brought what I brought and I would have to deal with it. 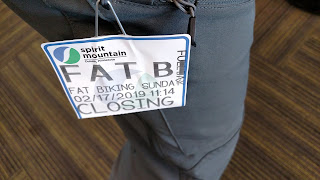 We followed Nick and Libby to the doggy daycare that Izzy would stay at while on our adventure, then we hit up the hill! We were told by a worker to ride down a groomed trail to the bottom of the hill, and there we could purchase our lift access passes. I was excited and nervous! What if I wiped out before I even got started. What if a skier didn't see me? Could I move out of the way fast enough if a skier went in front of me? Aaaah! I made it down the hill just fine. I was shaking, my adrenaline was up, and I was feeling stoked. 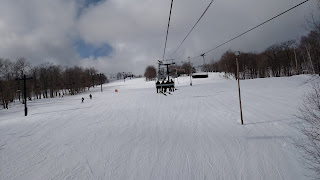 The trails we would end up on were: Juggler Joe, Timber Cruiser and Calculated Risk...Juggler and Timber were both skiable while Calculated Risk was a singletrack, downhill trail. Unfortunately, because of all the snow, it wasn't the most amazing trail to ride. It's hard to pack down softer snow, and it was extremely easy to get off-line and stop, fall over in knee-high snow, and then some. Everything that was groomed for skiing/snowboarding was amazing. 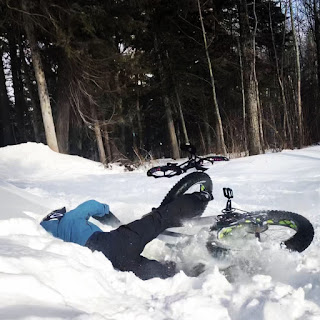 The latter part of Calculated Risk was really fun, but if you rode the whole thing to get to the latter part you definitely got a workout. We spent our time going down Juggler Joe, Timber Crusier, and found an entrance to the lower portion of Calculated Risk via Timber Cruiser. All in all, our first few hours on the slopes was awesome. I was getting the hang of letting off my brakes, letting the bike move under me, and having fun. I was feeling a little bummed tho, because I kept eating snow (rather than sh*t) on the singletrack portions and I couldn't figure out why.

I was feeling bad because I was becoming the very last person out while everyone waited for me. Everyone else would bumble in a spot here or there, fall over, etc. I just wasn't seeing it.

I realized I was being too hard on myself along with trying to control too much when I really needed to "let go."

Libby was great with sticking with me as much as she could, granted, if I plowed into the snow I was a lost cause, but I found myself smiling again and enjoying the ride.

It was an awesome experience to ride down a hill so fast. I was nervous at first about navigating with other folks, but it wasn't that bad. I feel like I have pretty good reflexes and I have a decent ability to anticipate what others are doing. It was part of the rush, finding a good line, maintaining it, staying out of the way, etc. 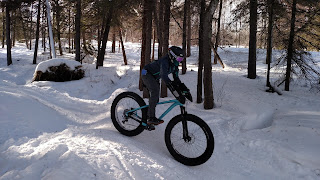 Our last run down Juggler Joe (by that time we were calling it Jolly Jumper) was perfect. I was able to stay on Travis' wheel the entire time, caught a little bit of air here and air. My silly self never turned the GoPro on for that particular run. If I had, folks could've seen Travis catching some good air. They wouldn't have seen that the 4 of us made a perfect train down the hill. It wouldn't have captured the smile on my face. Frankly, I figured it was fate. If I had turned that GoPro on, I probably would have crashed, maybe I wouldn't have gone as fast, or something else would've gone wrong and it wouldn't have been "perfect."

Nick said I got "sendy." That made my day!

After we rolled back to the trucks to get our dry clothes, we went back to the main lodge to change and get some F.O.O.D. because boy...we were hungry! We found a lounge/bar, ordered up some beverages, and I was stoked to get a swiss/mushroom burger. YES. So mushroomy, so cheesy, and so delicious. I felt like I could've eaten 2. 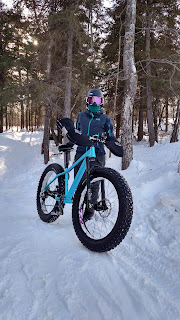 We followed Nick and Libby back to pick up Izzy and made our way back to Iowa. It was interesting because back home we were receiving snow...and it had totaled around 6ish inches. My anxiety was up, and I wanted to make sure I could stay awake to be deer watching support for Travis if it were needed. Also, I really didn't like the thought of crashing into a ditch while I was asleep!

The closer we got to La Crosse, you could tell weather was happening. By Spring Grove, it was definitely interesting driving on snowy roads. Heading to Decorah...oh boy. I surprised myself with how I managed to stay awake- and as soon as we were able to settle down in the house, I washed my hair in the kitchen sink! (Our bathroom wasn't quite done with being remodeled.)

I was so happy with our Minnesota adventure!
I am really excited to make 2019 a year of experiences. This was the first in what I hope are new and exhilarating biking trips with friends!
Labels: downhill fatbiking duluth fearless women of dirt iamspecialized inspire spirit mountain