Opening Up To Hope 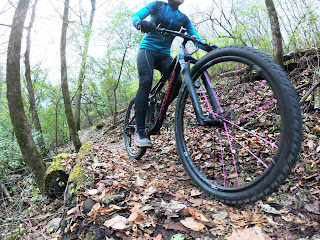 Letting hope in. It can be a hard task to accomplish when the year has been so full of challenge, and I wasn't ready to let go of my positive mindset.

I had told myself I would not say any particular year would be "the year" but at the same time, I knew in my bones that 2019 would be a better year.


I wasn't going to sit around and just expect next year to be better, but I would go about ways of ensuring it would be by my own ability.

Next year I plan to go on a mountain bike trip, and I'm very excited about it. I'll say nervous too because there is only so much planning I can do between now and then. It may wind up being a solo trip as well, and goodness knows I've never flown by myself. Also, to strategize getting from Phoenix to Sedona. Yaaaas Queen! I'm going to do this. All because I was invited to the fest this year, but wasn't able to make it work out due to our local college homecoming weekend + gun auction.
It looked like it would be so much fun and would allow me to go outside of my comfort zone and experience different riding. I want to meet some of the amazing women I've interviewed. I want to find more women to interview. I want to challenge myself to be fearless!

Shortly after my mental commitment to going to places unknown, I got the email from Specialized announcing I was brought on as one of their Specialized USA Ambassadors!

This was something that I felt quite torn on if I should or should not apply. I've applied for programs like this before- and have gotten the emails saying I wasn't selected. Reading those emails sucked. With the year I've had, why would I want to read another one of those? I looked at it this way. If I didn't apply, then it would definitely be a no. If I did apply, maybe, just maybe there would be a possibility of being chosen. Also? I was so incredibly stoked over having two new Fearless Women of Dirt chapters in development. I felt that FWD was gaining some serious traction and I was excited to share that. I've continually had great relationships with our Specialized reps and they have been awesome with helping me out for the FWD Women's Night and in general, being supportive.
I know I live in a smaller community, but I dream big. Things are happening. I figured it didn't matter if I got an email saying "We're Sorry"...that wouldn't stop me from growing FWD in 2019.

The fact that I got accepted solidified in my mind that if I stay determined and focused on my dreams, and allow hope in, I can accomplish. I'll leave that statement as is because I don't have just "one" thing I want to accomplish. It's an extensive list!

One thing I'm excited for is to be able to work more closely with a company that has been so supportive of my endeavors. Decorah isn't a large city, so for a large company to recognize what I'm trying to do is really awesome. As a company, I love how they are continually working to increase the women ridership as well as taking steps to get more youth on bikes. From Little Bellas to Riding for Focus- it's absolutely awesome and I really hope we can bring those to the midwest/Decorah at some point.

I had an emotional high.
Something unexpectedly positive happened and I felt my dad had a hand in it.
More because I let my heart open up. I let the sunshine in.

I had a ride shortly after all of the good news. I made time on a Tuesday morning (when I typically don't have time) to go out for a ride. The sun was out as well as the critters. I saw two blue jays flying around- I have always liked blue jays and never knew why. Not long after my dad passed away, when Travis and I were riding trails, I found a blue jay feather. They were something that I felt connected us in some way.

I heard a lot of rustling off to the side of the trail and looked over in time to see a buck running across the hillside. He was magnificent. That moment of seeing the blue jays and the buck was breathtaking. It was a perfect outdoor scene and one that I imprinted in my mind.

Later during my ride, I had this wish of seeing the buck again. Maybe, just maybe...
On the lower half of Little Big Horn, near one of my favorite spots, I heard the sound of deer running. I looked up and saw the same buck with a doe following behind. I wondered if she might've been the same doe I came upon when riding a few days prior. I had a beautiful moment in time where she and I were literally within feet of each other. It was incredible.

During that time, I was feeling a bit down because I was dissecting the differences my dad and I had. The things we never had the chance to do together.
I realized that we both had a deep connection and appreciation for the gifts nature can give. So what if I never learned to hunt? I found a way to be outside in a way that my body and mind appreciated. I think my dad was simply overjoyed that I found something to be passionate about. Something that gave me drive. Something that inspired me. I feel like he looked for that often in his life, perhaps finding it and sometimes not.

For fun, I decided to look up the symbolism of the blue jay and these were some of the words that came up:
Assertive, Vibrant, Curious, Intelligent, Talkative, Determined, Fearless, Audacious, Trustworthy, Resourceful 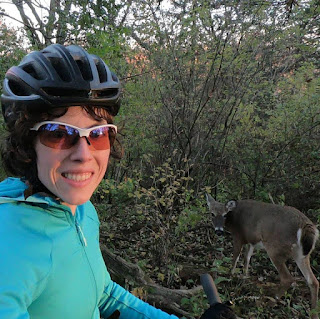 Deer also symbolizes the gentle, enticing lure of new adventures. Should a deer come into your life, Ted Andrews tells us to look for new perceptions and degrees of perceptions to grow and expand for as long as the next five years (deer shed and grow their antlers for five years).

It didn't seem wrong for me to assume that I will be continuing quite the journey for the next while. Opening myself up to possibility. Adventure. Growth. If there is something to take away from what I've experienced this year, I would say that it has given me the push I need to go out of my comfort zone.
To believe that there is more I need to experience and see. To do.

I'm not sure how adventurous my dad was. I'm not sure where this streak came from. All I know is, I am ready to explore this side of myself, and I know he'll be there with me.
Labels: bikelife fearless women of dirt growth iamspecialized inspire ROAM Specialized