Standing On The Edge Face Up 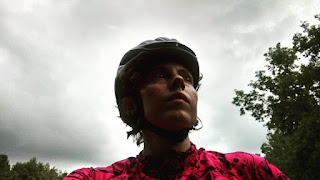 'Cus You're A Natural.

Ha. Really. That's far from it.

You know when you go for a mountain bike ride and you're just blindingly emotional? You ride like sh*t. I fu*ked up a few times and I realized that my energy was just all over the damn place.

I took the opportunity (assuming I was legitimately alone in the woods) to have a conversation "at" Dad.

For those who don't follow me on Facebook, I discovered last Tuesday that I needed to get a new septic system for my dad's house. Tree.Roots.
Holy crap. Okay. So great.
Progress with cleaning up his home was being made, only to find out that fu*king tree roots have rendered the system useless.
Pump out the years...literally...years of sh*t.
Only to make removal easier.

I had to cry.
I was beyond frustrated.

This week on Tuesday I discovered that a majority of my dad's electrical setup was not up to code.
The joy of changes.
Also, Dad was smart enough to fix stuff up to be "enough" for him- but that didn't necessarily mean it was "correct."
Like...2 extension cords to plug in the (well) pump to the house?
Seriously.

I spent half of my ride saying "sh*t"...I did not have a lack of frustration.
I'm glad no one was around. I sounded like a very grumpy person.

The storm was coming- clouds darkening and thunder rumbled.
It felt like my heart and soul.
Everything feels "extra."

I'm so tired of having so many questions. Was my dad going to slowly start fixing stuff up? Was he going to let the septic system deteriorate further? Keep his janky electric setup?
I will never know.
You have to accept that there is a lot of sh*t you'll NEVER know.

You have to accept that everything is what it is. There isn't going back. You can't change anything.

All I could come up with was I would leave my dad's property better than it was when I came to it.
It's so funny. Ironic. How it was hidden from me for so long and then I have it shoved down my throat. It hurts. It also makes me feel humbled.
I wish I could ask more questions.
I would have to accept that my dad would likely not tell me the answers.
I get it.

It just sucks, because I think there was more to him in me than I realized. His insight could've helped me understand more. 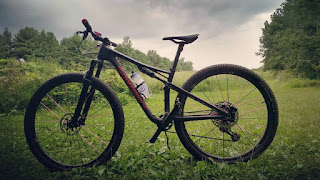 There may be a lot that stresses me out.
That challenges me.
That makes me cry.
That makes me swear.
I will endure.
I will persevere.
I am a storm.
Labels: bikelife biketherapy fearless women of dirt growth iamspecialized personal