You Were the Light For Me to Find My Truth 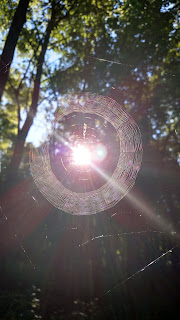 It's been hard for me to write about life for a while because there has been so much on my mind about grief, processing, and general life stuff. However, I've had several folks tell me they appreciate me sharing my journey through loss and grief. So, here it goes.

Challenges have been:
I continually worry that people will get sick of me talking about how I'm feeling about the loss. The grief I'm really not allowing myself to feel right now. The general goings on of life.

I am grateful for the friends who invite me on rides, sometimes I can make it work and sometimes I can't. I can't express in words how those invites make me feel. Thank you.

Another has been not relying on Travis too heavily to be my "rock" during this time because it's the busy season and frankly, there isn't time. Do you know how hard that is?

It's the busy season and business comes first- regardless if you suffered a major loss. It's your livelihood. It pays the bills and keeps a roof over your head. Some would say: "That's not true, family comes first!"

However, customers will not always see it the same way because time away means we're either closed OR it takes longer to get their bike back. Also, your partner hasn't gone through something quite so tragic and your coaster of emotions is something they can't quite understand.

I had to acknowledge my anxiety was getting to the point where it was feeling pretty rough. So, I decided to try an alternative to anti-depressants first. I did some research and am trying some products from CBD for Life. I was popping a lot of ibuprofen for pain/discomfort and got to the point where I decided that it wasn't good for me to keep doing that. Plus, if there was something that could help me ease the feeling of panic I had on a daily basis, that would be awesome.

The products have definitely helped. I've managed to not take ibuprofen for a couple weeks now, and my anxiety feels much more manageable. That alone makes me feel a bit better.

I also bought a blank journal, markers, and watercolor markers at Cardboard Robot to utilize in processing and feeling sharing when I'm not at a point where I'm ready to share it on here.

What else?
Well, I'll say that the reality of loss hits you once the life insurance premium comes.
I cried when I opened the envelope and saw the amount. It was a mixture of many emotions, and really I wanted to rip it up and tell it to f***off. I didn't want this. I want my Dad. Not money. It made me hate money.

My dad had multiple policies for accident insurance. I hope I know the right amount of policies. (I would imagine I'd figure it out eventually.) It's true. I would be taken care of. I just resent how I was financially taken care of when really, all I wanted was a close relationship with him from the start. He did what he did what he could.

The second is when you pay for the funeral home services- and you realize you sent the check a couple days before his birthday. Irony.

The third is when you get another life insurance check on his birthday.

The day before his birthday, I wanted to do what I felt would be a "tribute" ride. My goal was to ride 66 miles in one day. However, with everything I had already pre-scheduled, that would surely prove to be challenging. So a second goal was 52 (the year he was born.) 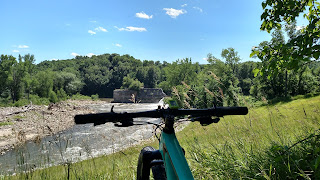 What came of the day wasn't what I had planned. The sky was beautiful and the temperature pleasant- after I got used to being in the saddle for more than a 6-mile mountain bike ride, it was good. Barrett and I rode together, chatted, and I'd sometimes break away to see how well I could attack a gravel roller. I felt positive for the first time this season pertaining to how I might fare at Chequamegon. Yes, gravel grinds were not happening for me like I thought they would, but I felt stronger than I thought I was.

I realized at the end of our ride, as we stopped by Luther College, my shoulder wasn't hurting in the front like it typically would after a ride. I felt strong. I felt great. I could ride 33 more miles! I'd have to do them solo, tho.

I opted to visit Travis and talk about the feeling of obligation over a "grand gesture" vs. the feeling I had of Dad really wanting me to enjoy the day with riding vs. making it some challenge or goal. I don't know if my dad really loved his birthday or not- I always try to make my birthday more special than an average day. 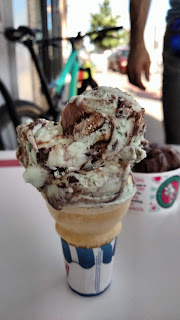 So, we decided that a great idea for a little "recovery" would be to visit Sugar Bowl Ice Cream Co. and get my first ice cream of the season. Mint Avalanche. I figured this would be the closest thing I could do to celebrate the life of someone I love, without committing myself to eat a whole pie. Dad loved pie. I think Banana Cream Pie was something he'd have Grandma make for him on his birthday. I love it, too...but not enough to make a whole pie. It was fun to hang out with Travis and not be at home or work...heck, we really weren't on our bikes (tho we did bike there.) A short break in the day for both of us- I enjoyed it immensely.

Then I went home so I could switch helmets and hit the trails.

It was glorious to be out on dirt, no concern over vehicles or dogs wanting to eat your leg for a snack. (Yes, we encountered a dog on River Road we had never seen before, and I found courage out of desperation to save myself from being bitten to yell "NO! GO AWAY!" as loud as I could. Channeling my inner "Dad"...a man who barely raised his voice, but when he did, you knew sh*t was going down. I was reminded as to why I've shied away from solo gravel grinds. I am anxious about dogs and traffic.) 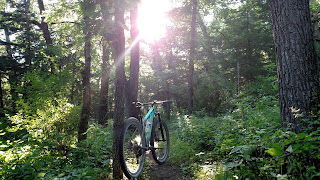 The smells, the trees, the sound of my tire on the sticks and dirt. Climbing up Tombstone after biking 33+ miles already.
Hitting the 43 mile mark.
I felt I had made the right decision for my day- and as I snapped the picture of my bike on the Fred trail, I knew my Dad would be happy. He got quite the adventure. I finally put the keychain on my hip bag that has a tiny bit of his ashes, so he is getting out on rides with me now. Giving me strength, keeping me company, and wondering why I climb so much when it's really not my favorite- I'm just good at it. 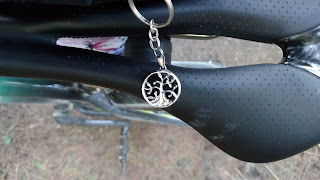 On his actual birthday, we had a short ride where I finally rode up the Little Big Horn switchbacks perfectly for the first time this season. There was a tree on Upper Little Big Horn that had low branches, and my goal was to make it passable rather than having folks run into Freddy Kruger-like branches. 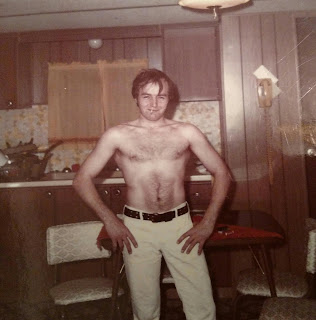 It was a lot of effort for someone of 5'2" with a bad shoulder and a small handsaw. The end result was positive, and I felt very accomplished- tho I worried if I would make my arm blow up. I'm a prideful person, and sometimes I can't help myself. I'll do what doesn't work for my body for the sake of proving that I give a damn about our local trails. I feel shame over what I'm unable to do, so sometimes I just "do" and hope for the best.

Thankfully, all I felt that morning was a sense of accomplishment, a job well-done, and physical tiredness that made me feel good. My body proved to be strong, as well as my mind- I was grateful to give Dad a tribute that involved several things he would enjoy, all of which were outdoors, and in those moments I felt close to him.

As I finish writing this, I had a dream last night where he was in it. In the storyline, he hadn't passed away, but I must not have seen him for a long while. I was having dinner at someone's house when he came in thru their back door. We ended up having the greatest, biggest, hug. It felt very real at the time. I think I finally got some sort of sign.
Labels: bikelife biketherapy grief growth healing personal