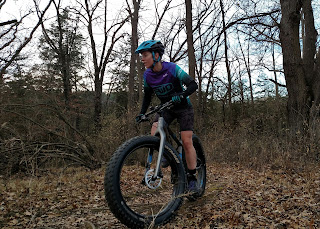 The inexplicable wave of doldrums came crashing down on me without myself even truly noticing. Maybe I did notice, but I was in denial.

Mornings were becoming harder and harder for me to rise up from the comfort of the warm, cozy bed. I was feeling more tired than usual. I had the case of the "I can't even" and it came hard.

I didn't want to admit that I was feeling poorly on the mental/emotional side, especially since so many good things had happened recently.

Everything came crashing down over holiday stress and some news pertaining my step-dad that, quite frankly, pissed me off.

My feelings were deeply hurt, because he tried to insinuate that he hadn't been invited to the wedding to some relatives of mine. I call bulls*it and I have the text messages to prove it. What I envisioned for our father/daughter relationship crumpled at my feet: Anger, sadness, and frustration took over.

I have firmly accepted, without a shadow of a doubt, that my step-brother can screw up his life and still be higher on the parental acceptance totem pole of my step-dad than I ever will.

I learned over the "mourning" period of these past few weeks, that my quest to be acknowledged and considered as my step-dad's "daughter" needs to end.
I do not think I totally grasped how much this hurt me. This man has been part of my life for a long, long time and I truly considered him a second father. I wanted acceptance. Hell, after I learned I  LIKED beer I felt that I was closer to being a "Miller" than not.

All in all, I was very young when my parents got divorced, so I never really had to deal with the strain and turmoil of being an older child going thru the process. I did have my ups and downs as I grew older, trying to understand and accept- but really, it was what I knew. I had a dad I visited and a dad I lived with...and step-brothers I was too young to relate to, and who didn't want me around. I would say that was a huge challenge. Especially when I got older and wanted to "have a brother" who liked me.

Instead I was the step-sister only his closest friends knew about. My ex-husband, who graduated with my step-brother, didn't even know I was my step-brother's step-sister until I told him. I shocked my fellow classmates who had siblings in my step-brother's grade. I'll never forget some of the locker-room chatter, "Oh my GAWD, you're his step-sister?!" I secretly hoped I would somehow become more liked by my peers once they knew. Ha. That never happened.

My biggest blessing was when the step-brother discussed in this post moved out. Freedom. I got the coveted upstairs bedrooms. I was going to finally be "The Kid" and I would win all of the favor and acceptance I could. I'd help out my step-dad on the farm and become a real asset! I would be loved! Accepted!

It kinda worked out that way.
I did gain acceptance from my step-grandpa, which was something I never thought would ever happen. I finally wasn't the lazy, fat kid whom he would berate. Instead I was helpful, hard-working, and had become (to my knowledge) almost a "Miller." At least "Miller" enough to not be bashed anymore.

My world broke when my step-brother came back to the area. He started helping on the farm and became more of an asset because 1. I was still in school and 2. He was older and stronger. I wasn't without purpose. My step-dad could go and help his son with whatever while I milked. It was tedious and frustrating at times, because there were some cows in the barn that seemed to hate me. They would try to kick me, slam me against the wall or into another cow, and just be turds. Oh, Holsteins.

Eventually, I was "let go" from helping on the farm because our herd became smaller and with my step-brother's help, my step-dad didn't need me anymore. I remember the phone call. I was sick with a cold and even tho I was feeling like crap, I was readying myself to go do chores. My heart dropped. My usefulness was gone.

Other things happened, too, which directed my step-dad's attention even more towards his son. I slipped further and further away. I couldn't do anything. I could get married, and that didn't change how accepted I felt. I could've had kids, but I know that it wouldn't have done anything to change how I was viewed. I could drink beer. That didn't bring me into the fold any further than I already was. It was what it was and is what it is.

After moving away from the farm, it wasn't on my mind as much. My coveted and highly appreciated call on my birthday from my step-dad always made me smile. It was a highlight of my day! I would make sure my ringer was up high in case he called on a bike ride or make sure my phone was near me at all times until he did.

This year, on my birthday, there wasn't a phone call.
I had my phone near me on the drive to Viroqua. I had my ringer up high. No call.
My happiness meter went down, and down again, until basically it had plummeted to the bottom.
"He's probably busy. He'll call. He always calls."
No call.
Eventually, early evening around 5 p.m. I got a poorly spelled out text message saying "Happy Bday."
"Well, it's better than nothing." I sent a thank you and invited him to the wedding.

Flash forward two months later...and I'm looking at a relationship that I tried to have, but never was able to attain. I've tried to compete against his own son, and it didn't get my anything other than feeling like utter crap. I also had to sit back and reflect on my feelings towards my step-brother.

A period of time in my life I idolized him. I was jealous of him. He could get away with EVERYthing. He was popular. He had charisma. He was very smart (even if he didn't truly apply himself in school- I have a fond memory of one time he was feeling nice enough towards me to help me with a math assignment.) He could ask for money without working for it. (From his dad, NOT my mom.) I had times in my youth where I resented what seemed like luxurious freedom on his end- where I had responsibilities. I had to do my chores, I had to earn my allowance, and I would get punished if I did something wrong. The grass is always greener, and I learned in my latter years that never being held accountable for your wrongdoings really doesn't get you anywhere.

I had a very big pill to swallow over someone I looked to as a brother, not ever really being a "brother" to me. There has been a secret rivalry between us all these years that I never really acknowledged until now. (I would imagine he didn't know, either.) A lot of resentment. Resenting him for all the years he was an angry, teenage sibling to me and for being the shadow over me for many years after. The other pill- trying to win the acceptance and love of a man I considered my second father. To be seen as his "daughter." It became apparent that it was never going to be the type of relationship I thought it could be.

I started to head down a path of some major self-pity. You try hard for years to find acceptance with someone you love and admire, only to be shown that they just really do not have the capacity to do so. Self-worth plummeted and I had to make the choice on whether or not to let it take hold. 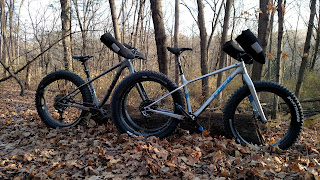 My fatbike ride with my husband this morning (Ha! I said husband! That still makes me giggle) gave me peace. The past week has been challenging for me. I feel because I try every year to make Christmas as special for myself as it was during my childhood,and it always seems to fall short. I was letting bitter feelings and sadness take hold. My stress elevated, I became snappy and defensive. It didn't help I wasn't biking, either- I had no outlet. I felt like I was a popcorn kernel just about ready to explode into a piece of popcorn. Not good.

Our ride this morning wasn't the speedy clip we had last weekend, but a more casual ride that was fast enough for me. I took in the scenery, listened to the snow crunch under our tires, and found joy in feeling my lungs breathe in cold air. The effort felt good. The trails were great, the ground was frozen, and riding warmed us up quickly. I reminded myself of why I need biking in my life- it makes me sort out all of the craziness in my mind and lets me just "be."

I'm okay. I know this. I know I get into slumps and I really have to immerse myself in "all the feels" before I can truly work myself out of it. During these times, I'm not the most loving to myself and become frazzled over all of the goals and things I wish to do, yet do not have the capacity to do them. I worry I'm letting people down. The feeling of panic over procrastinating takes over and I start to doubt myself and my dreams. Then, I start to feel sick and tired of feeling tired and frustrated- I push back at myself. "Josie, you have to start waking up earlier if you want to ride! Don't you want to?!"

I have to thank Travis for going out riding with me these past few Sundays. I think if he hadn't, I would've found myself wallowing instead of getting off my ass and doing what I love- riding my bike. I also have a thank you for Stego and Ed, who joined us for our group ride last week. I very much almost said "ah, I'll just go do my own thing" but everyone made it enjoyable. I surprised myself and the ride brought back some of that "Aw, yeeeah!" I was missing. 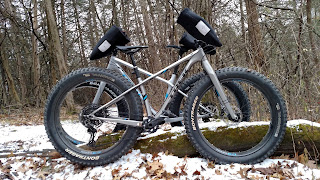 Sometimes lessons are learned in the processing and you have to process to learn. I have come to realize I have family and network of wonderful friends who are like family.

They help bolster me when I'm down, support me, encourage me, respect me, and help me realize that my value as a person should not be defined by anyone other than myself.
Labels: bikelife fearless women of dirt growth personal