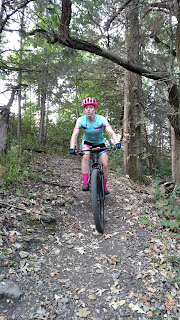 It's been awhile since I've written a post, and now that Chequamegon is over and we're heading into the end of the FWD riding season, there is a lot on my mind.

Chequamegon was an eye-opener for me on multiple levels, and that opened me up to conversing with Travis about next year goals. What do I want to accomplish? What am I proud of this year? What needs to happen for me to progress and grow further with cycling- if progression and growth are even possible from where I'm at.

The only way to know is to try.

In order to try. I need to have time. T.I.M.E. That is something that I ran out of this year, rather quickly I must say. Nothing else can set in motion negative thoughts and worry like an event coming up on you and you feel like you had no time whatsoever to train. For me, training was simply being able to get a couple longer-mile rides in so I could feel assured that I could indeed finish.

When you went from having at least 5-6 good rides last year to 3 long rides prior to Chequamegon, your mental sureness goes out the window rather swiftly.

Physically I was dealing with a crappy situation for a decent portion of last year into the early summer months of this year. My the sides of my IUD was digging into my uterus and likely had for some time. It greatly affected my monthly cycle and the weeks prior and post- I can't tell you how frustrated I felt, feeling so unprepared for Time Trials, Borah Epic, and even Chequamegon because I held off on rides due to the fear of hurting, or the fact I was hurting. I'll forever remember June as a day where I got my body back. Along with some relief and sanity, too little too late, tho.

I saw such a stark difference between Travis and myself in terms of endurance, I decided wanted to work on bettering myself. I need to. It's not just a want. Cycling is an important part of my life and it's something I've shown progression with- and that's addictive. I'm not going to be the next Emily Batty, but I can certainly progress towards being the best damn rider I can be before I get to the point where progression won't happen.

I'll be 33 shortly. It kind of freaks me out. Years have gone by quickly since I discovered #bikelife, and I want to have as many positive years with it that I can.

In order for myself to build up better endurance for Chequamegon, I have to...H.A.V.E. to do more paved trail rides and/or gravel rides. I don't have a choice. I avoided gravels this year due to misunderstanding Travis' worries, my physical discomforts, and that they were so dusty that I just didn't feel motivated. I also decided that Tuesdays would be the best day for FWD Women's Nights and FWD Mother/Daughter rides. My time slipped away from me, granted, I had some really positive experiences to come from them.

Because FWD is a one-woman show, I have a tough time being able to put together and facilitate everything I wish I could. On the ride home, talking with Travis, I had a hard pill to swallow. I would need to give myself more time to ride, and that day is Tuesday. How can I have monthly women's nights, maybe bi-weekly FWD Mother/Daughter rides, and my Sunday rides without feeling burnt out?

Simple. You still do it, but you scale it back.
Until I get another person to have on board to lead rides on their own, giving more options for women for days/times, I'll be limited. This is me saying- if you want more FWD rides/events to happen, I need help from other women who feel that FWD is a valuable asset to the Decorah riding community.

The FWD Women's Nights have been a great addition to the FWD group. Originally I thought that having one from April-September was a great idea, but then I realized that having a Women's Night on top of a possible bi-weekly Mother/Daughter ride would really, really cut into some necessary "me" time.

April 24th will be the first FWD Women's Night of 2018, which will kick off the FWD riding season which will start in May.

The FWD riding season will be May-August.

Our last FWD Women's Night will be August 28th as a celebration to end the scheduled riding season.

I'm planning FWD Mother/Daughter rides to be in June and July, hopefully, coinciding with the Park and Rec mountain biking class for kids. My hope is that I'll know when registration opens up and can advertise that with FWD moms and for those who have kids in the age ranges- they will have a ride every Monday and 2 Tuesdays during that month. That's a lot of riding for some and it would be extra beneficial for skill growth. Monday rides are co-ed and Tuesdays would be all girls.

Like with the FWD rides, if there is a mom who is interested in hosting some easy FWD Mother/Daughter rides on different days/times, then they should get in touch with me so we can plan additional rides.

There is so much opportunity for FWD to grow in the Decorah community, but I'm realizing that it definitely takes a group of folks who share the same drive and passion to make something truly grow. So, until those folks step up and voice they want to work with me on making FWD grow in Decorah beyond what I'm doing, I'll do what I can to continue building up our women's ride community while making sure to take care of my needs. Because #bikelife! How can I continue to be an advocate for women and riding if I'm not doing what inspires me and makes me want to share my passion?

I'm realizing and pursuing the path of being able to be an advocate while still being active with my personal growth in cycling. Finding balance, that alone is a journey, and one that I'm sure I'll be working on for years to come.
Labels: bikelife fearless women of dirt growth inspire involved women bike