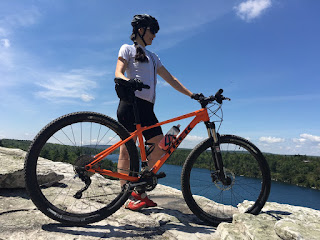 Kristen Phillips and Lisa Mazzola Live in New York City and are involved in the cycling and coaching communities.

Kristen and Lisa are both long time cyclists with strong background in art and yoga, and their coaching business, Art of Cycling NYC, blends these concepts together in a unique way that emphasizes total enjoyment in the moment.

Their goal is to turn cycling into an art form and are on a mission to use bikes as a way to improve quality of life in the urban jungle.

They are also part of the leadership team for Bicycle Habitat Women's Cycling – a bike shop driven program that leads bi-weekly rides and  provides coaching,  clinics, and other instructional programs throughout the season.

Tell us the introduction to your #bikelife and what it means to you-
My #bikelife started in 2005 when I went to my childhood home in Long Island, NY to go through my personal effects as my parents we selling the house and ordered us to get our stuff out. While I was doing it, I found my sister’s old ten speed bicycle buried in the garage. I brought it back to Manhattan (NYC) where I was living and started using it to commute. Immediately I was reunited with that amazing feeling of freedom and joy that I used to have as a kid cycling around the suburbs, not known as an interesting place culturally or environmentally. Unfortunately, within a year it got stolen, but luckily a woman I worked with (who eventually turned out to be a teammate) and her husband were selling one of their many bicycles. The rest is history as they say.

When did you decide that being involved with cycling as a coach was something you wanted to pursue?
In 2010, I took part in the New York Cycle Club A SIG Classic series. It is a 12-week progressive series where you go from 50 miles to a 110 miles, the whole time focusing on fine-tuning skills, and working towards cycling in fast, tight pacelines. Only 50% of the participants graduate, and I was one of them. Afterward I was asked to become a leader and then in 2013 I was asked to serve as a Co-Captain for the 2014 season. It was that position that made me realized I had much more to share and wanted to do so in a more formal way.

What would you say has been your greatest moment with coaching?
I don’t think there has been any one moment, but rather, luckily many moments of being present when an athlete accomplishes something they never thought was possible before. Seeing that level of stoke and pride in an athlete is something I can’t get enough of.

What would you say is the most challenging part of your job?
I think that I still struggle with the balance between the art and science of coaching. Although it requires content knowledge, and an understanding of the scientific framework, it also requires good communication skills, patience and intuition. I feel comfortable with the latter, but still learning and trying to become as expert as I can.

How did you first become involved with Art of Cycling NYC-
Kristen and I met last summer on a cycling holiday in the France. After several long climb chats in the Pyrenees, we realized that we shared a similar philosophy about cycling and its power to improve quality of life. In addition, we both had some similar opinions and thoughts about how to integrate cycling and yoga both into our own practice, but also into coaching. It was really empowering for me to hear about Kristen’s and the Habitat program and realize that there was someone else out there that felt as strongly as I do about the need for focused and supported practice and coaching, especially for newer riders to the sport. Five months later Art of Cycling NYC was born. It all came together very organically and easily.

Tell us about Art of Cycling NYC and how women can find benefit-
Art of Cycling NYC is actually for both men and women, although we currently have a predominately female client base. I do think that beyond the obvious benefits from taking part in coached, structured training, I think that women work well in groups and can gain inspiration from each other. So, for example in our indoor computrainer classes, I already see a sense of camaraderie building as everyone gets to know each other. It would be great to see the group continue to ride together outside. Although I do not think it is required, I also think being female coaches can be helpful for women. Having coached men and women, I definitely have seen many women really thrive having woman mentors who understand the issues that are specific to women, whether it be training or even equipment related. Only a woman truly knows the pain of not having your saddle dialed in! 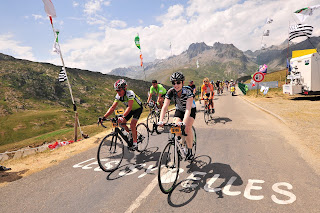 Why do you feel it is important for women to help educate and inspire women riders?
Cycling has long been considered a sport not for women, for a variety of reasons. Luckily, most recently, athletes like Evie Stevens are not only challenging that notion, but also represent someone coming to the sport later in life. I also think that cycling can be very intimidating and for some reason, men seem to move more easily past that feeling, where woman I feel need more of a welcome and mentoring into the sport. Ultimately, women can do anything a man can do on the bike!

Take us back to your first mountain bike ride- did it go as you had hoped or was it stressful?
This is an interesting story. My very first mountain bike ride was no stressful, and was not what I expected. I was thrown on my friends full suspension 29 er and just barrelled over stuff, and crashed many times. I did not do it again for many years, and when I did it was super stressful. I was once again on a full suspension 29er but for whatever reason I was absolutely not comfortable on the bike. Add in terrain that was way over my head and I as ready to never mtb again. All that changed last summer when I got to demo my Superfly at Kingdom Trails in Vermont. I still crashed, but it was not nearly as stressful, and actually very fun!

Give us a few suggestions that may be helpful for new off-road riders-
Whatever you do, try to stay relaxed (mentally and physically) and try to focus on having fun. If you're totally stressed out, you're better off backing up to a place where you can challenge yourself and still enjoy yourself in the process.

Clips or flats? What do you like and why?
Clips! I am a climber and can’t imagine doing technical climbing without them. Caveat, I have only tried flats a couple of times.

Have you had any buffs that were challenging for you on a physical/mental/emotional level? What did you do to heal and overcome?
Although my worst “biff” was in 2009, in 2012 I crashed on a gravel downhill on my road bike. It freaked me out so badly that even after getting a cyclocross bike with bigger tires, I was still petrified on rides, especially downhills that emulated the one I crashed on. Although my physical injuries were fairly minor, but I struggled for almost a year to gain confidence. Interestingly, once I started mountain biking, my confidence off road and on my cx bike happily took a big jump.

When you started out riding, what were some handling skills that challenged you? Do you have any suggestions for what helped you grasp them?
Although I took to the sport pretty well from and endurance and fitness standpoint, I did not have an easy time with bike handling skills. I basically practiced them all the time. The whole 10K hours concept. I would do drills on the grass in the park, and also on my stationary trainer. Once I started racing and then riding off road, I had to go back to the drawing board with new drills and a whole lot more practice. That would be my advice, practice, practice, practice.

What do you love about riding your bike?
Absolutely everything, except the time it takes to get dressed in the winter! It is my time to feel the most free and close to flying as I can as a human.

Tell us about your bike(s), what they are like and why did you choose them?
Like Kristen, I am lucky that I have room for three bikes in my NYC apartment. From 2010 to two weeks ago my road bike was a Cannondale Supersix. For 2017 I am on a Specialized Amira Expert, which despite the geometry differences is similar in ride feel. Light because I love climbing, and stiff because I also road race on it. This past summer I entered the wonderful new world of mountain biking and I have a hardtail Trek Superfly 5. I also have a 2011 Van Dessel Gin and Trombones cyclocross bike that I ride dirt and gravel on, as well as bike commuting.

What do you feel deters women from getting involved with cycling? Especially mountain biking?
As kids we all jumped on bikes, but as adults it seems to be much more intimidating. There is all sorts of gear to navigate, terrain, fitness. It’s a lot to process. Add in the skill level and learning curve required in mountain biking and it's even more overwhelming. I would also argue that the same would be true for men entering the sport. I think men are conditioned to buckle down and suck it up. Whereas women connect to sport with more subtlety and nuance. 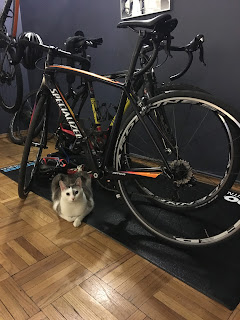 What do you feel could change industry-wise or locally to encourage more women to be involved?
In New York City women in cycling continue to rise steadily from my experience. Programs like Bicycle Habitat Women’s Cycling and organizations like New York Cycle club and even CRCA give women opportunities to enter the sport with lower barriers. The common thread is community, opportunity and mentoring.

What inspires you to encourage women to ride?
I think my own love of the sport, and experience going from totally unathletic to riding at a high level, and even racing motivates me. I want everyone to enjoy life and feel empowered as much as I
do because of the sport.

Tell us a random fact about yourself!
I have a cat named Ollie who loves to hang out on my kikr mat, with my bikes.
Labels: Art of Cycling Art of Cycling NYC bikelife fearless women of dirt inspire interview involved Trek Women Advocate