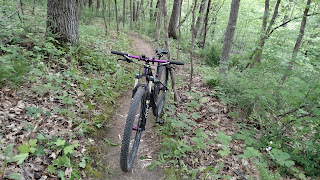 It’s funny when you feel like you’re almost on top of your personal world, and suddenly you have a reality check via a tiny spindling of a tree. The left side of your handlebar clips it, and you’re flying in the air faster than you can think. I felt like a crash test dummy in a vehicle, when the airbags deploy and their heads are getting what looks like would be agonizing whiplash.

My shoulder and arm hit the ground in a somewhat awkward angle, to which I felt acute discomfort and the worry of a break or dislocation grew. I laid on the ground for a few moments, more or less to build up courage to test my mobility. I groaned, sat up, and moved my arm and shoulder. All seemed well, but I knew the next few days would be frustrating.

I’m not unfamiliar with discomfort in my right arm. In fact, I have chronic issues with it- after spending around $500 dollars at the dr. for x-rays, a cortisone shot, and a suggested dose for Aleve- I was told that I was just not built “ideally” and I should probably see a PT and figure out different ways to do work. My shoulder was constructed with a shorter outward bone and more sloped than not, which meant that I had less space for my rotator muscle(s) to travel, so when they (or whichever one is most problematic) got inflamed it would lose mobility quickly. My takeaway was less space to travel meant more likelihood of inflammation.

I wasn’t entirely sure how I felt with the “diagnosis”…really, I felt frustrated. It had been tough the last few months to deal with the on/off frustrations of a chronic discomfort. I had been hoping for something a bit more than simply learning that it’s something I need to manage for the rest of my life. Here's to an on-going attitude adjustment.


So imagine how happy I had been on my ride, because it was the first time all day that the muscles in my shoulder felt relaxed. All day I was having stiffness/tightness issues and it felt like nothing was touching it- then I get out on my bike and find myself feeling nimble and free. I had to talk myself into going for a ride, because I wasn’t sure if it would agitate or help- and I was pleased to found that it most definitely helped!

Until I smacked into a tree.

I got up and assessed the damages. My bike was okay besides the handlebars and seat post askew. This is why I would always recommend carrying a multi-tool. You never know when you’ll need it, and there was no way I could’ve successfully ridden the bike down Fred’s had I not been able to realign the bars. (Granted, it still wasn’t perfect, but it made getting home by bike doable.)

I was feeling humbled. 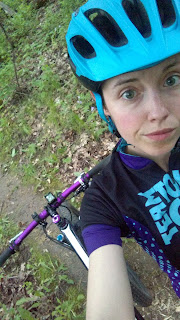 I feel that my season has started off with some really great positives. Time Trials, a fun feature in an Iowa paper that not only highlighted Decorah- but spoke of my wanting to make mountain biking seem more possible to women, trade shows, a women’s mountain bike weekend, and a hopeful application sent in for an advocate program. I feel like there are some really fantastic opportunities lining up this season and I was feeling true excitement.

I’m entering my third dry season of riding, which one would seemingly think I’m an “expert” and I very much shy away from that title. By no means am I proficient at every handling skill- not one bit. I’m still fumbling over getting my front end up over logs. If you asked me to manual, I probably would fall over or just not succeed. Really. There is a LOT for me to learn yet.

However, in my mind I think on a subconscious level, I’ve gotten to where I feel pretty good with our trails and my riding skills, so I’m not focusing so much on fine-tuning vs. seeing how fast I can ride with my skill set. Let’s be real- there will come a point where even you, as a new rider, will want to go “fast” on something safe, familiar, and relatively easy. You won’t be able to help yourself. You’ll do it and you’ll probably like it and find that it’s fun. You might not ride that way on a regular, but every once in awhile you’ll push yourself to try going “just a little faster.”

For me it started with doing that a bit last season, and now this season I’m periodically doing that on other trails besides the easier ones. Couple that with a new bike that handles differently than your trusty Cali and you find yourself learning various lessons in handling. However, I had just proved to myself that I will not only crash with testing the limits of my new bike, but also my tried and true.

I won the Women’s Category at Time Trials...
I have local riders (who are male) and who are super skilled/talented talking about how impressed they are of me or how well I did...
People know that I want to inspire and support more women to mountain bike...

I certainly didn’t feel like I was a great advocate for mountain bike women while I was a heap on the dirt.

Thing is, crashes happen. They will happen when you least expect it and it seems it will happen more as you start going through the middle-stages of your learning. I liken myself to a 5 year old that is trying to test their limits with their parents. All of the “Why” questions cropping up and insisting that they can really touch the thing they aren’t supposed to. I keep reaching out to touch and I am getting my hand smacked- but I keep trying. Because at some point, no one will be looking and I will attain the unthinkable.

One doesn’t learn or know limits until they push themselves. In the past, I was always afraid to let go and “go a little faster.” Travis would often times encourage me by ending up far ahead of me because in certain areas he’d pick up the speed or not use his brakes. He was flying and I was holding back. Eventually I’d ease up on the brakes a smidgen here and there. Eventually I learned to like it, because I discovered I could fly, too. 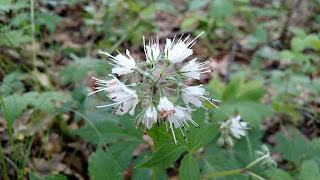 It’s a drop in the bucket and it certainly doesn’t negate all of what I have learned or accomplished. It doesn’t take away my goals or objectives of getting more women involved with riding off-road. In fact, it makes me want to try even harder than before.

Pick yourself up, dust yourself off, be self-sufficient, and shed a tear or two because you were shaken up. Take a deep breath and remember- crashes happen, and you’ll end up walking away learning something new. Be an advocate. You love this too much to let it go.
Labels: growth mountain biking personal women bike