Mountain Biking Concerns- Holding Others Back and Getting Hurt 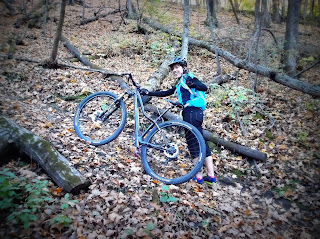 Holding others back was the top concern chosen by women for a mountain bike survey I created a few months ago and it overshadowed "getting hurt" by one vote.

Take someone who defines herself as an emotional person, put her on a mountain bike, and push her outside her comfort zones. One will find it's really easy to max her out in the beginning.

These were also my top 2 concerns when I started riding trails with Travis and at times, these concerns negatively impacted my learning experience.

When I had bad days where I was falling or dabbing all over the place I would plead for Travis to leave me behind. I was certain I was cramping his riding. He would have to stop behind me mid-climb or wait up for me as I huffed and puffed up a hill. I was embarrassed. I knew I wasn't going as fast as he could go. He rarely rides and here I was, completely taking up what could be a super rad time for him and turning it into a newbie session. "You can go ahead, I'll be fine." or "You don't have to wait for me, I'll find you eventually."

I would sometimes ignite a headbutting session out on the trails because Travis would not stand for my pity party. "I'm out here because I want to ride with you."

As I write this, my hope is that if you are a woman and your significant other is encouraging you to join them in mountain biking, that the above statement is what they are saying. "I want to ride with you." This means, if they ride ahead, they will stop and wait for you to catch up and do so happily- because you came out regardless of your worries/concerns.

They will not mind nor give it a second thought if they are behind you on a tough climb and you spin out- thus making it impossible for them to complete the climb. Both of you walk up the rest of the hill and continue on, knowing it's part of the learning experience.

To the fellows wanting to introduce their significant other to mountain biking- making it a point to do it together (in the beginning) is vital. If you take your partner out and leave them miles away in the dust, simply expecting them to follow behind (way behind) on blind faith that they will know where they are going and what they are doing, that is a perfect recipe for disaster. This spells bad news for many new riders who often decide after a ride of that nature that mountain biking "isn't for them."

Negative ride experiences with one person potentially leads the new rider to having a difficult time joining rides with others. They will assume it's all the same, regardless of who is there or not and their focus is "I will hold others back." I feel that group rides can be a positive situation for new riders because it gives them the opportunity to connect with others who are on their same level. Be specific when looking for rides in your area.

Not all groups are the same, so it really comes down to researching and joining for a ride or two to see how it goes. Sometimes it takes time to find a group you really jive with, but the point of it all is to have fun! You can learn so much from other riders, you just have to let yourself have the chance.


Another lesson learned: If a more experienced rider invites you on a ride either with their group or solo- go for it. Especially if they know you are a newer rider. Why? Because they probably think it's awesome you're learning and they want to encourage you and thus, help you feel more confident out on the trails.

About a year or so ago (when I wasn't working at Decorah Bicycles and had a 2nd shift schedule) I was invited on a ride with a local woman. She kicks ass and I hope I can be shredding trails as well as she does when I'm her age! I was intimidated at first, but I really felt it would be a good experience for me, and it was!

She helped to push me outside my usual pace a bit and we linked together trails that Travis and I didn't ride often. So I had a multi-level experience and the benefit of riding with another woman. I learned she was human and sometimes still puts a foot down when riding. Not every ride is going to be 100% perfect and beating yourself up for a dab isn't going to make it better in the long run. Dabs happen- best thing to do is get over it and keep riding. 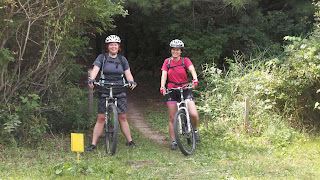 Then I was challenged again- another woman showed interest in joining my friend and me for a ride. She had been riding for several years already and I went into the situation worrying far too much about my skills or lack thereof. She, too, had reservations of riding with other women because often times there was vocalized worry over how well they didn't ride, etc. The three of us had a great time and got over our concerns rather quickly. After Travis and I started our Sunday group rides, she joined us for as many rides as she could! She expressed how grateful she was for there to be a group ride such as ours- she'd been waiting for something like that for some time. She inspired me to open myself up to possibilities and to not over-analyze myself or my riding.

When I turned 30 I decided to have a birthday weekend filled with bike riding. I threw out that I was going on a ride Saturday morning and a local rider friend said he'd join. This guy is a strong, fast rider. You bet I was worried because I knew that there was no possible way I could keep up with him if he rode "normally" however, it ended up being awesome! We would alternate who led on certain trails, and when he rode ahead he would wait for me to catch up. I was never dropped and I did not feel judged at any point for how I rode.

Then there are the group rides thrown together on a whim (not shop led nor weekly rides) If our schedule works out, Travis and I go. Typically I find I'm one of two women to join. Travis will stick with me during the ride because I'm not one that can hammer for long periods of time. On the last ride we went on I was feeling particularly fatigued and slipped up on a climb. There was a fellow behind me who was completely cool with my re-situating myself and said I was doing great. He was probably thinking that it was awesome that there was a woman mountain biking at night, with a bunch of guys. Plus he appreciated that he had riders to follow who weren't trying to ride as hard/fast as they could.

As scary as it is, you have to let yourself go into situations that really freak you out in order to see the positives. There are going to be riders that aren't interested in helping out new mountain bikers, but there are riders out there that fully support and encourage them. The ones that offer to ride with you are the ones that will cheer you on. We've all been there, we've all been the "new rider" and someday, you'll be the one helping a new rider by either introducing them to a ride, trail, or simply giving some positive feedback.

Then we come to getting hurt....
You will have a collection of bruises and potentially pedal pin pricks in your shin. Add clipping in (once you are comfortable/ready) and you'll be right back at it. Try fatbiking in the winter months and you'll learn that you will fall, but that's part of the fun! Falling is part of the game. It happens, you brush yourself off, and you keep riding. 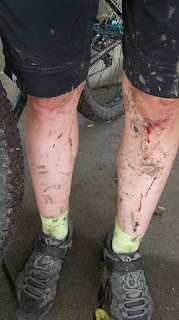 Getting hurt is not nearly as death-defying as it seemed when I first started out. I imagined I would be plummeting to my death or having my arm/leg in a cast. That hasn't happened and I've been riding since '14. Simply put, falling in dirt hurts a lot less than falling on pavement.

My first few tumbles when I started out were not that bad and they were pretty slow- I didn't fly off a cliff. Often times it was falling over on an uphill where I'd fall into the hillside vs. over the edge.
I have had some falls that scared me, but those aren't frequent in nature.

Bruises are what you'll encounter 99% of the time and they're fun to show off. If you have friends who are new to riding I bet you'll start comparing them and sometimes taking photos of all that radness. After a season, I was less dinged up, but when I started riding clipped in it happened all over again. Winter months add color, too.

You can't let the fear/worry of getting hurt hold you back. I haven't had an injury from mountain biking that kept me off work or sent me to the E.R. I've had injuries that left me feeling a bit sore/stiff and I have chipped paint off my bike, but that's just part of learning.

When it comes to mountain biking, it's putting yourself out of your comfort zone of what is deemed "safe" and that can be scary. The amazing part of this is that there are so many encouraging riders out there who are going to be supportive of you. Really! I've encountered several men during events or rides who had nothing but props to give for me being out there. I promise that there are some really awesome people out there who want to ride with you and think it's great you're out there, too! So what are you waiting for? Mountain biking has been one of the most confidence-boosting activities I've done. You will find yourself overcoming personal challenges and accomplishing goals you never thought possible and inspiring others to do the same.
Labels: growth introduction mountain biking personal