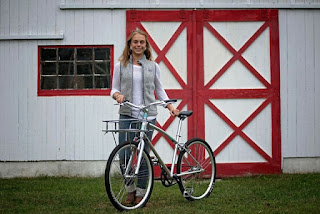 My name is Chelsea Koglmeier and I'm the founder of a socially conscious bicycle company called Bikes Of Reckless Optimism (ORO for short,www.bikesoro.com). I've spent the last year prototyping and designing simple & clean commuter bikes. With each purchase, we support the donation of a bike to someone in need around the world.
As background, I'm a 26-year-old, Duke graduate. Motivated by the sun and by getting people access to opportunity all over the world.

This company is a dream that began with a few months, 8 years ago, working in a refugee community in Kampala, Uganda.


Check out the Indigogo Campaign here!

When did you first start riding a bike?
When I was really young -- although I couldn't tell you an exact age. I lived in a great town for riding, so was always on my bike. Best memory was riding no handed all the way to swim practice, including down the last hill (it was BIG), over the grass, and into the bike rack. I practiced everyday, but that was serious success.

What motivated you to ride as much as you have over the years?
When I was a kid, riding was pure fun. When I got older, I would ride out of necessity. I didn’t get a car until after college, so I rode everywhere around campus. I also race triathlon, so I ride my road bike multiple times every week and I’ve been doing that for years now. Now, I ride because I work inside and it’s a good way to get some outdoor time.

You created Bikes of Reckless Optimism- what was your inspiration for a bicycle based business?
The inspiration actually came from living in a refugee community in Kampala Uganda and seeing how powerful a bike could be to change someone’s life. It also cam from a general interest in supporting the movement for businesses with double bottom lines -- for profit and a social mission.

In your words, why is it important for those in need to have a bicycle?
Access to opportunity. In a lot of countries, there’s bad infrastructure and schools aren’t close to where kids live, things like that. Bikes help get people to opportunity— like school and work— by simply giving them a vehicle. They can travel 4x farther than on foot, so options really increase.

You work in partnership with World Bicycle Relief- why are they an organization that deserves support from those who love riding bicycles?
I think the majority of bike donation nonprofits deserve people's support! They’re doing important, empowering work. It’s always important to look into the details of how nonprofits function though. You want to make sure you know where your money is going. For ORO, that’s incredibly important. I wanted a clear picture of how our contributions were able to impact peoples access to bikes. WBR is an incredibly well-run, transparent, and iterative nonprofit. They track their effectiveness and change things to make their organization and their distribution run smoothly. I’ve been very impressed!

The process: someone purchases a bike from O.R.O. ...quarterly you look at numbers and write a donation to WBR that goes towards wheels for a Buffalo bike. Is there anything else we should know about the process?
That’s what it looks like for now. We’re teaming up with WBR for that “everyday” style ride. We may bring in some other “mobility” related nonprofits for other product lines. For example, we’re launching a handmade tricycle (built in New Jersey by an amazing woodworker) that has “you can change the world” inscribed on the foot platform. I’m really excited about it because it’s such a great way to open a conversation about social impact and conscious consumerism with kids. We’re probably going to be working with a US based nonprofit that refurbishes and distributes kids bikes for that product. 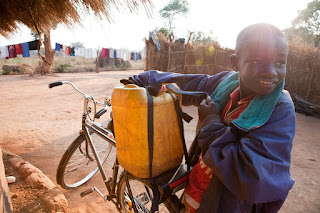 I think it will be a constantly changing landscape, but the theme will always be getting people access to mobility.

What do you love about riding your bike?
So cheesy, but it makes me smile for no reason except the feeling of riding. It also connects me to people around me. When I ride around, I engage the people I pass and see things I wouldn’t otherwise.

Why should people look at a bicycle as a viable form of transportation (vs. a "toy")?
This is a great question! I’m so happy it came up because I think it’s something that we’re working to change around the US. Other countries absolutely see bikes as viable forms of transportation — think of the Netherlands or think of Rwanda. In the US, we’ve seen bikes as kids toys or competitive toys for a long time and they’ve got a bit of that stigma attached to them. With the emergence of more bike lanes in cities, and bike share programs, I think we’re just on the brink of a whole new bicycle world in America, where people really start to view bikes differently.

It’s a bit of a paradigm shift, but it’s happening. Slowly but surely.

Tell us about the bicycles that people can purchase from O.R.O.-
Right now, we’re launching just a single bike in 3 sizes. It’s a porter style — which means it’s a casual bike, somewhat upright, front basket, nice curved top tube. It’s equipped with 3 speeds, an internally geared rear hub (which means the gears are inside the back wheel and less likely to break), and a Gates Belt Drive. For people who don’t know about belt drives, it’s a drivetrain that replaces the traditional chain links with carbon fibers. It’s an amazing product that lasts 7x longer, doesn’t use grease, and is incredibly low maintenance. No reason not to have it!

If someone isn't in the market for a bicycle, but wants to help out O.R.O. what would you suggest? 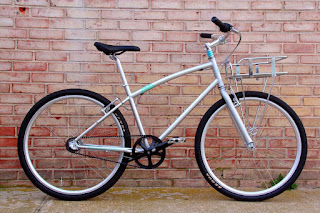 Well, for our Indiegogo campaign, there are a lot of different/fun perks. Anything they can contribute is welcome! For someone who is interested in helping, but the crowdfunding campaign is over, they could apply to join our Ambassador team (www.bikesoro.com/ambassadors) or just email me directly if they have another idea.

I believe in partnership and working with people to make things happen, so am always open to a conversation.

What has been one of the biggest challenges for O.R.O?
Working alone for a year has been tough.

What has been one of the largest successes for O.R.O.?
There’s 2 really: 1) building a great bike product that should exist, but doesn’t; 2) building our Ambassador team full of inspiring people.

What do you hope for O.R.O. in the next several years?
I hope we turn into a linearly scaling small business. Every year growing a small amount, becoming a little more sustainable, and eventually being able to sustain ourselves without outside capital. I’d like us to link our team to the work of the nonprofits and get people out on adventures and create a branded line of products around our tagline “built with reckless optimism”.

Are there any ways that individuals can become involved with O.R.O. to help spread the mission? How can they do so?
As I mentioned above, joining the Ambassador team is a great way to help spread the word. We love chatting with the press and joining in on big bike rides. The fun thing is that it’s still new, so the options are endless and we love go-getters.

Do you have any suggestions for women who are looking to be involved in the cycling industry based on your experiences?
It’s such a unique industry and at a serious inflection point right now. It will be very interesting to see what happens in the next year and in the next 5 years. If you like being in a space with unpredictable outcomes that you may be able to help define, it’s a good space for you at this moment. And, it is the truth, there are a lot of guys, so we could absolutely use more more lady presence in the bike ranks.

What do you feel could happen industry-wide and locally to encourage more women to be involved with cycling and the industry?
I think the bike lanes are big. It is proven that ladies feel like riding on the roads is more risky, so the more public funds are put towards developing that infrastructure, the more ladies we will see riding. Also, ladies need to be spoken to in a different way then men. Every other industry seems to target messing differently based on gender, but it is not really happening with bikes. I think speaking in a more accessible (less tech-y) and warmer (optimistic) way, is a great way to connect. 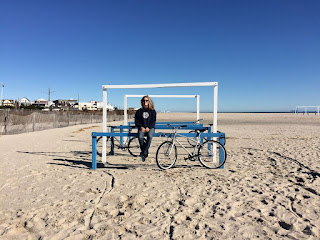 What inspires you to encourage others, especially more women, to ride?
Bikes are a great tool for taking care of ourselves and taking care of the world. If it's been so good to me, I hope it can do the same thing for other people. Specifically on the women note, I guess I've seen the stats and women are lagging significantly behind men in ridership in the states. I don't understand why!

Tell us a random fact about yourself!
I’m into farming. I live on a great plot with goats and chickens. Every year we raise fruit trees, bushes, all the vegetables. The more I do it, the more into it I get.
It’s all kind of linked to the general wellness concepts, but maybe farming will be the next business :).
Labels: Bikes Of Reckless Optimism interview involved ORO women bike