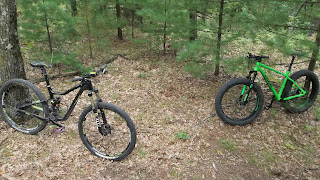 Last winter we were told to go hit up Levis Mounds for their excellent fatbike trail system. Unfortunately, the day we were supposed to go the temps were in the upper 30's and rain was in the forecast. My spirit was temporarily crushed due to that, and made up my mind that we would go at least 2 times to make up for it. Once during the dry season and once during fatbike season. If it ends up being more than 2 times, I won't complain.

For whatever reason, September hits and weather is no longer in the 80's which automatically makes people think riding season is "over" or maybe it's because vacation season is mostly over, schools are back in full swing...either way, business at the shop slows down considerably.
Repairs are caught up, and that means that we can leave town and not worry obsessively over 'all the work that needs to be done.'

We packed our bags the night before with our clothes and snacks and I went to sleep feeling restless and giddy. Much like when you're a kid going to bed Christmas Eve. Eager anticipation, wonderment of the unknown. "Will I be able to ride the trails? What challenges will I encounter?"

We got up early and headed out of town around 8 a.m.

The drive was very pleasant and I enjoyed the scenery when we got further into Wisconsin-so many pine trees! Trees were starting to turn color- mainly the ones showcasing bright, red leaves. I almost felt like we were heading to Canada or (somewhere other than Wisconsin).

The drive took about 2 1/2 hours, which isn't bad at all. When we pulled into the park area, there was ample parking and a building that housed restrooms that we could use to change into our riding gear. Can I say, I love multi-stall bathrooms? 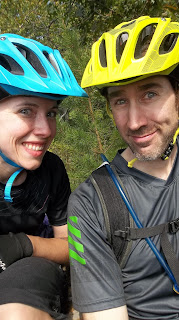 I was given an itinerary from a friend of mine who rides at Levis more frequently- she gave us a 10ish mile loop of trails to do. We snagged a map from the trail center as well, you know, just in case. Our route: Lower Glen, Swamp Cut, Yellow Jacket, Sidewinder, Upper Hermosa, Hermosa, Lower Hermosa, Dead Turkey, Toad Road, and Clarence.

The lower trails were a nice warm up for me, which gave me confidence that yes, I can ride portions of trails here a-okay. I would almost say that I was given a false sense of confidence before we headed further up the hills.

Similar to Decorah trails there are rocks/roots, however there are many more exposed roots to roll over at Levis. Not a huge deal, especially as I was on my full suspension and Travis was on a Farley 8 (fatbike with front suspension fork). Completely different from Decorah were sandy areas. Sometimes the sand was so dense that my back end would fishtail a little. It was fun to see how steady I could keep myself as I rolled along.

Sandstone was something I was used to seeing around my dad's hillside in the Allamakee area, but something I didn't experience it on our local trails. Sometimes you came up upon boulders of sorts- this was something that I would have some success with here and there with technical maneuvering skills and other times I fumbled due to my riding cautiously. I'm not really one to rip around in unknown areas, as I'd rather have enough time to judge what is coming around the corner before I commit.

Sidewinder was definitely a trail that challenged me a lot. I'm not a big fan of heights and I have confidence issues where bridges are concerned. Especially ones high up and with a huge fall if you were to make a mistake with handling. I was happy to walk the spots I needed to.
During my times where I felt really nervous, I tried to keep myself positive by immersing myself in the scenery.

Some of the areas we rode had a wonderful smells of pine trees, which in the sunshine smelled warm and fragrant.
Fuel for our ride was some Skratch cookie bars I made along with some other snacks we purchased prior to. Nothing says "You're doing awesome!" like a warm, gooey, chocolate chip cookie bar. Especially one made with minimal ingredients so you know it's not all artificial junk. 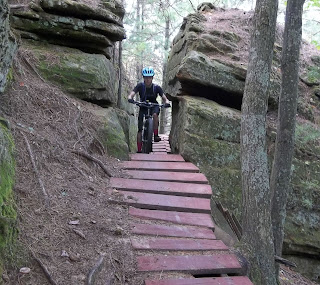 Toad Road boasted the "plumber's crack" rock formation that you ride a bridge thru. At first I wasn't going to attempt the bridge at all, but after walking it and realizing that it wasn't wobbly- I gave it a go. I didn't do the bridge area prior to the "crack" but simply rode the bridge thru the crack and down. I sessioned that spot a few times to help me work away some of my nerves of height and bridges.

There were breathtaking lookouts located at various trails. You would stand on a rock ledge and see for miles. I could only imagine what it would look like with trees wearing their autumn finest- oh it would be splendid!

We rode back to the truck after our first loop of trails and had a break. I had to admit, I was working myself pretty hard! At first I felt a little down, because I thought I was a "better rider" and I had this thought that I should ride almost everything with no issue whatsoever. Who am I kidding? I'm still relatively new to this whole mountain biking gig. Also? Have I ever been 100% on trails I've never ridden before? Not really. Granted, I didn't think Utah was too bad, but I did not ride dabless all over the place.

Thus, I decided to look at it this way- riding trails that are new helps build my experience. I learn how to ride in different areas. I also learn that challenge is GOOD. Why go somewhere new and not learn something? It wouldn't be any fun if it was a cakewalk. Perhaps my confidence would've skyrocketed....but would it be truly worth it to have everything easy? Nope.

I was successful with a couple features that I had never ridden before (on Lucy's Loop) and went on my first teeter totter and another fun little structure. I made most of my way on the long skinny before fumbling right at the very end. Of course my next two attempts were completely terrible, it's one of those things where I think you end up thinking about it too much and it just doesn't work as nicely.

I did experience personal frustration when on sections with bridges that were higher off the ground. One of my first "real" biffs was on a wooden bridge (and of course, on my new commuter Karate Monkey...) since then I've had extreme apprehensiveness over bridges. One instance in particular frustrated me because I really, really wanted to give the structure a fair go. I started and stopped a couple times, realizing that I was not mentally ready to take the challenge head-on. My throat burned with a giant lump and I did everything possible to keep my emotions in check. I wasn't going to beat myself up over this and I wasn't going to let it ruin my trip. When we came to a point that we had to choose our next trail to go on, we stopped for a quick hug. 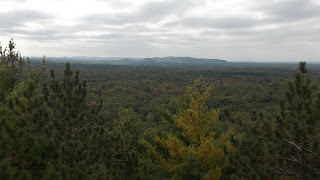 This is mountain biking. Sometimes it gets down and dirty with your emotions...I can't tell you how many times when I first started out that I came to an area and psyched myself out. It's simply part of the experience, the learning, and growth of yourself as a rider.

Eventually we made our way to Select Cut and from there up onto Switchback. I'll say we were mid-way up Switchback when we stopped for another cookie break. My legs were becoming quite tired. I'm a person that likes to make the most out of trips, so I will ride forever to make sure that every minute counts. I guess I don't mind making myself suffer a little! I felt very accomplished when we got to the top, then it was figuring out a route down and making our way back to Porky Point. 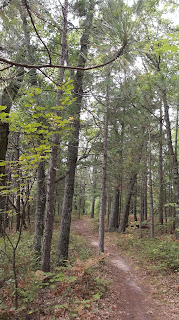 Porky had a fun rock to climb up to and look out over the world- this is where I'm pretty sure I finished my last cookie. On our way down I came to a big rock slab that first made me nervous but I said "what the heck?" and rode down it anyway. Then my front tire hit the ground wrong and by that I mean it slid out from under me in the sand. So of course I had a minor fall...nothing serious. Mildly frustrated because I had sand all over my shorts, socks, and shoes...and wasn't even sure how I messed up. I just had to brush myself off and keep on riding and not dwell. Next time, rock...I will ride you perfectly!

Levis was a really great experience because it gave me so much in such a short period of time. Not all of my riding was perfect, but I felt accomplished with what I did ride. I was able to enjoy being out in nature and spend some quality time with my other half. I experienced similar yet different terrain and really got to try out my full suspension bike in an area where it could truly shine.

If you are able, totally give Levis a go- it was a wonderful experience and one I can't wait to have again!